"I'm proud to say I'm a liberal": How conservatives vulgarized a term -- and why the left must reclaim it

FDR and JFK proudly called themselves "liberal" -- but then the right made it a slur. Why it must be embraced again 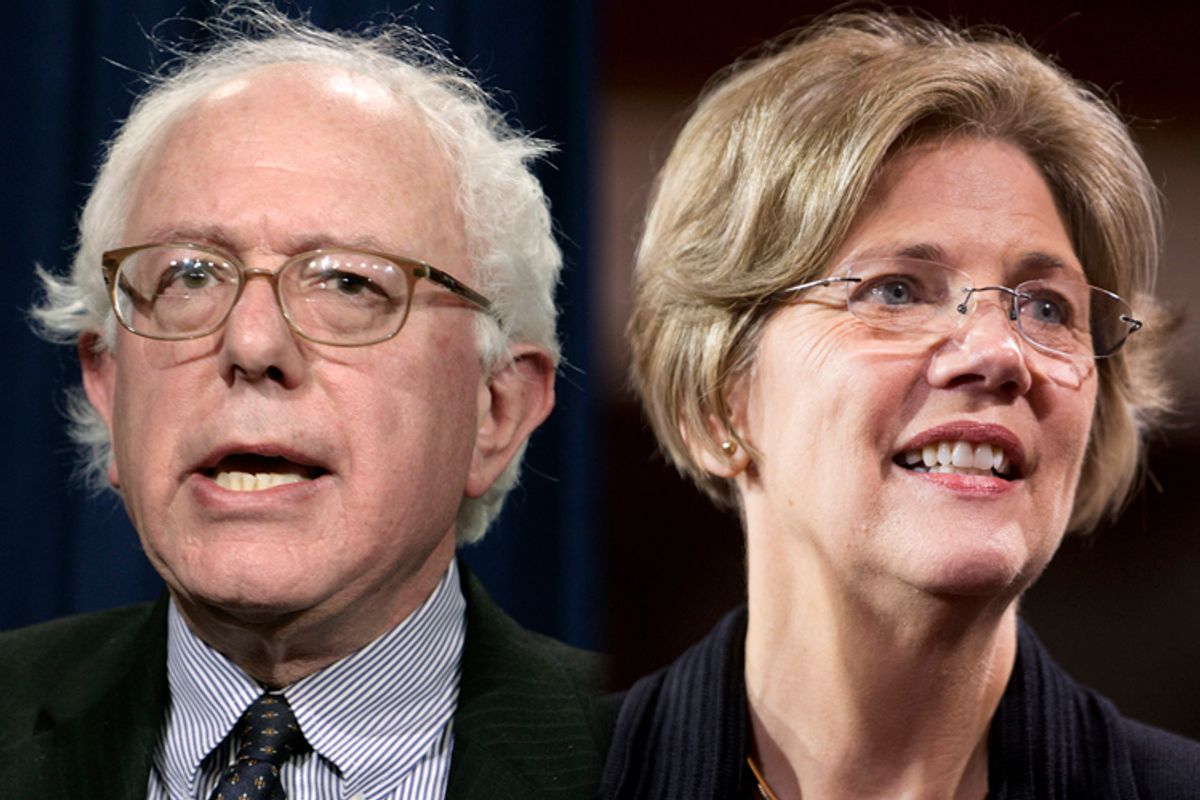 With the rise of new Democratic leaders like Elizabeth Warren and Bill de Blasio, among others, one word keeps dominating the conversation on the left. I refer, of course, to the word liberal. Dreaded by centrist Democrats who consider it an epithet and recipe for disaster, it's nonetheless time for the left to no longer shy from this label -- and, indeed, reclaim it.

While Hillary Clinton commands a 6-to-1 lead over her potential rivals in the Democratic presidential primary race, there are murmurs about a challenge to her candidacy from the left. Even if unsuccessful, such a contest would pressure the former secretary of state to position herself as a left-liberal. After three decades of excommunication at the hands of centrist Democrats (including Bill Clinton) and conservatives of all parties, liberalism is finally returning to the mainstream American conversation. Its reemergence should be welcomed with open arms on the left, and today’s “moderates,” “centrists” and “leftists” (short of socialists) should champion the term, make it theirs once again and return to their roots on the left.

“Liberal” became a dirty word in American politics for two reasons. First, a combination of Democratic leaders perceived as ineffectual — George McGovern, Jimmy Carter, Walter Mondale, Michael Dukakis — helped tarnish the term. However, these individuals alone did not cause liberalism’s disappearance; after all, one does not see a similar aversion to conservatism because of Nixon, Bush and other Republican failures. The second and more important reason was that conservatives successfully conducted a campaign against the term, transfiguring it from a philosophy of freedom and social mobility into a bureaucracy-loving, freedom-depriving, taxation-and-entitlement ideology of largesse. Conservatives linked liberalism with the turmoil of the ’60s and stagflation of the ’70s, as well as the various foreign policy crises of that decade, and liberals themselves disowned the term. In vulgarizing the word liberal and polluting its definition, Republicans put Democrats on the permanent defensive. It was an act of staggering political genius.

The lesson Democrats took from George McGovern’s disastrous 1972 showing, Reagan’s overwhelming 1984 victory (where he won 525 electoral votes and won every state but Minnesota, Walter Mondale’s home state) and Bill Clinton’s successive victories was that conservatives were right. Liberalism had to be abandoned as a term and as an ideology. Democrats could compete with Republicans only by adopting conservative language and logic. After all, wasn’t Mr. “New Democrat” and “the era of big government is over” the first Democrat since FDR to win reelection? As George Orwell wrote in his famous essay, “Politics and the English Language,” “language can also corrupt thought. A bad usage can spread by tradition and imitation even among people who should and do know better.” Democrats had let the opposing party define their politics, vernacular and even policies. In effect, the GOP was given a monopoly over language in the 1990s and 2000s, and thus a monopoly over the very contours of political debate. Democrats should have known better.

So muddied had the term become that even 25 years after Ronald Reagan’s victory, ostensible liberals like Barack Obama ran away from the label. To preempt criticism of his liberalism — unsuccessfully, as the more nefarious and implausible charge of socialism awaited him — candidate Obama spoke of Ronald Reagan as a transformational president. When Hillary Clinton was asked during a primary debate in 2007 whether she identified as a liberal, Clinton answered in the negative, preferring the term “progressive.” Top Obama advisers berated liberals from the White House, with Robert Gibbs dismissing “the professional left” and Rahm Emanuel calling liberals “fucking retarded.” It was as if the intellectual richness of the liberal tradition — ranging from Adam Smith to John Rawls — and its manifold policy accomplishments had all been expurgated.

As both the label and the philosophy of liberalism return to the fore, Democrats should self-confidently reclaim the term. They should be protective of the term’s meaning and use it unabashedly, the way Republicans do of conservatism. They should remind the electorate of liberalism’s inextricable connection to the American experiment. In a sentence, they should become liberals again.

A coalition of liberals is indeed forming around Warren now — an unapologetic and unreformed liberal — and her fierce opposition to Wall Street chieftains and laissez-faire Democrats. The recently elected mayors of New York and Boston both ran on liberal platforms. Even President Obama seems to have gotten the message, declaring inequality to be “the defining issue of our time” — even if, in typical Obama fashion, he walked back the rhetoric on inequality and shifted to “opportunity” instead. When leaders of Third Way, an influential centrist group, criticized Warren for opposing Medicare and Social Security cuts, four liberal advocacy groups excoriated Third Way and its supporters in Congress. Warren sent a letter to Wall Street executives asking them to make public the list of groups they finance. Daily Kos came out saying it would not fundraise for candidates associated with Third Way.

Those who think a liberal turn would prove fatal to Democrats’ success need only to look at recent polls of American attitudes. True, two-thirds of Americans still self-identify as conservatives or moderates, but that is to be expected after the electorate has been told for three decades that liberals are villainous elites. On policy questions, however, Americans sound very liberal. Recent polling done by the Pew Research Center found that 71% of Americans say there should be a way for illegal immigrants to stay in the country legally. 54% favor taxing the wealthy to expand aid to the poor. 72% say recognition of same-sex marriage is inevitable. And on the venerated exceptionalism of the Second Amendment? 55% support a ban on assault-style weapons, 67% back a federal database to track gun sales, and a whopping 85% favor background checks for private and gun show sales. Americans may not yet self-identify as liberals but they do approve of liberal policies.

Of course, liberalism has always been part of American history. In its original conception, to use Isaiah Berlin’s term, it was a doctrine of negative liberty or freedom from government intrusion (from the Latin liberalis or “of freedom”). George Washington used the term amicably to refer to those generous persons who opposed denying Jews and Catholics their rights. There was a short-lived Liberal Republican Party organized in 1872 to challenge General Ulysses S. Grant and his Republican Party in that year’s elections. FDR called himself a liberal. Dwight Eisenhower once remarked, “In all those things, which deal with people, be liberal.” Accepting the nomination of the Liberal Party of New York in 1960, John F. Kennedy thundered, “I’m proud to say I’m a ‘Liberal.’” Richard Nixon said, “we’re all liberals." It appears as though there was once bipartisan consensus on liberalism’s merit!

Indeed, Democrats and Republicans could once share common attitudes about liberalism because of its impressive record on the policy front. Under the banner of liberalism’s ideological cousin, progressivism, monopolies were broken up and early child labor laws enacted. The New Deal — especially the Fair Labor Standards Act of 1938, which introduced a 44-hour workweek and established a national minimum wage — was a form of legislated liberalism. The Civil Rights Act of 1964 and the Social Security Amendments of 1965 — which birthed Medicare and Medicaid — were also liberal laws. Richard Nixon’s creation of the Environmental Protection Agency, the Occupational Health and Safety Administration, the Earned Income Tax Credit and proposed health-care law — similar to Obamacare—led Noam Chomsky to call Nixon “the last liberal president.”

In abandoning liberalism and capitulating to Republicans, Democrats unwittingly shifted the American political spectrum rightward. It is not without good reason that the United States has developed the most conservative political spectrum of all industrialized countries: candidates must position themselves on a left-right spectrum and when that spectrum tilts so heavily right, so do the candidates. Take Barack Obama, and drop him in Canada, the U.K. or Western Europe, and he would certainly be considered a conservative. By deporting record numbers of illegal immigrants, expanding the drone program, offering only modest revisions of the NSA surveillance and calling for a corporate tax cut, Obama would find himself comfortable in the Conservative Party of Canada or the Conservative Party of the U.K. Supporting capital punishment and not fighting for a public option in health care policy would win Obama few supporters among these populaces.

It is true that the United States is both a conservative and a revolutionary society. It overthrew monarchy and enshrined its foundational principles in a single, hallowed document. Every radical becomes a conservative after the revolution and in America, there is the added native impulse for maximal freedom — what the great conservative parliamentarian Edmund Burke called America’s “fierce spirit of liberty” in the eighteenth century. Revolutions harden political disciples, and framing liberalism as a distant, European idea, and ironically, the antithesis of liberty, meant condemning it as the very opponent of the American Revolution.

This distinction between conservatives on the side of the Revolution and liberals as its antagonists — “a little intellectual elite in a far-distant capitol,” as Reagan put it in his career-launching speech to the 1964 Republican convention — had the further effect of perversely affecting the GOP. This national myth that America iburnishs populated by conservatives, and that liberals exist only on university campuses and the coasts, has given the GOP carte blanche in its own political positioning. According to a study done by David Broockman and Christopher Skovron, legislators of both parties repeatedly overestimate how conservative their constituents are. Conservative legislators fare the worst, overestimating their constituents’ conservatism by 20 points — to the point where almost half of conservative politicians think the voters in their district are more conservative than the most conservative districts in the country. Jacob Hacker, a political scientist at Yale, noted in a 2006 book that Republican senators have moved twice as far to the right as Democratic Senators since 1975. Another study concluded that the current GOP is the most conservative in a century. The repeated dissemination and reproduction of conservative mythology has pushed the entire political landscape in a conservative direction.

After 30 years of exile and expurgation, liberalism is finally returning. A Gallup poll showed that a record number of Americans now self-identify as liberals. Part of fixing America’s broken politics is welcoming back an ideology that has done much to contribute to American society. Conservatives will surely be vengeful or dismissive of liberalism’s return, though such haughtiness may compel them to further election losses. Decades after its crucifixion, America is finally witnessing liberalism’s resurrection.