Some good news for Spike Lee: Even if gentrification can't be stopped, we can at least do something to control it 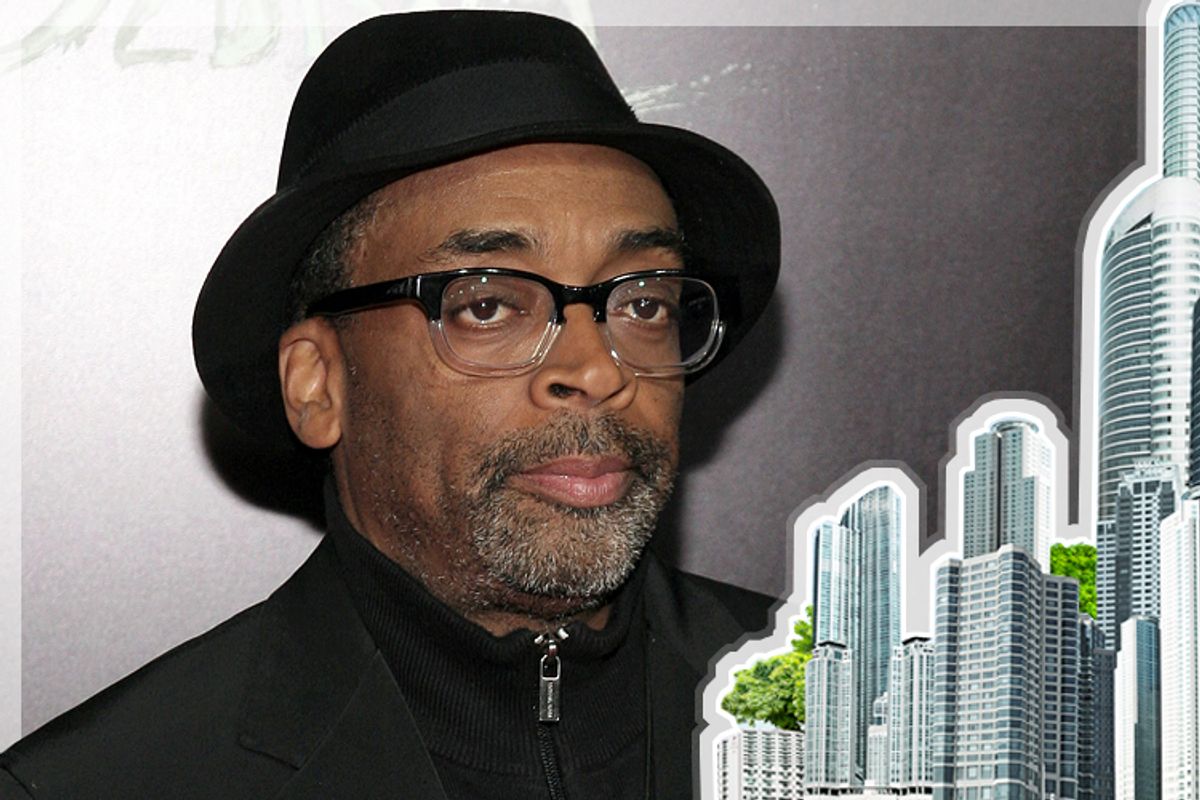 On a rainy weekend in January, the scene at Milady’s Bar in Lower Manhattan was both foreign and familiar. Foreign because of recent news that the bar -- which had anchored a corner of SoHo since before there even was a SoHo (some say it dates to the 1940s) -- was closing down. By early Monday morning, the place had run out of beer, and patrons were bringing in six-packs from the bodega next door. It was the first time that had happened. But why not? It wasn’t the beer that made Milady’s a favorite neighborhood joint.

Then these last rites were familiar, too, because two weeks before Milady’s closed, Gray’s Papaya closed up on Eighth Street. Before that it was Joe’s Dairy, on Sullivan Street, and before that it was Bleecker Bob’s record store, which sells froyo now.

Is this a higher rate of local business turnover than usual? It’s hard to know for sure. A report from the Center for the Urban Future, released in December, notes that the growth of chain stores in New York City slowed to .5 percent between 2012 and 2013, from 2.4 percent the previous year. But six straight years of gains for chains have had an impact – between 2008 and 2013, the number of Dunkin’ Donuts outposts has grown from 341 to 515; Subway from 335 to 467; and 7-Eleven from 57 to 124. The addition of 48 Starbucks in that time seems modest by comparison.

It seems, at least, that the city is losing its commercial old-timers. When Michael Bloomberg departed City Hall on Jan. 1, the cantankerous and ever-vigilant Jeremiah Moss published a “Master List of Vanished New York.” In the 12-year Bloomberg era, Moss estimated that the city had lost nearly 7,000 years of history in local establishments.

It is surely an underestimate, as Moss acknowledges. But then Moss isn’t interested in the general challenges of the restaurant business. No place on his list was younger than 15 years old, and many had operated in New York for more than a century. These were businesses, but they were also institutions that, no less than longtime residents or distinctive architecture, affirmed a neighborhood’s sense of self.

Of those three poles of urban identity, the local business may be the least secure in a city of rising land values. Tenants are secured by rent regulations. Buildings are preserved through landmark designation and historic districts. But few cities have the tools in place to protect businesses from eviction or rent increases.

Unsurprisingly, U.S. cities lag far behind their European counterparts on such policies. Our free-market politicians spurn municipal intervention, and our lack of sanctified national culture poses further obstacles: What business can anchor American communities like pubs in England or cafes in France?

More to the point, nearly every U.S. center-city was until recently a relatively cheap place to live and to do business. Europe is a different story: Angst at the prospect of a homogenous city -- brewing in the bars of Amsterdam or the pubs of London -- may have grown more pronounced in recent years, but the great European city centers have not been affordable, let alone cheap, for decades. What we now call "gentrification" has been underway in Paris for more than a century. For several decades now, the French capital has taken extreme measures to preserve the character of certain commercial corridors.

Paris recognizes the local bookstore, for example, as a public amenity that deserves relief from the pressures of the real estate market. In 2008, the planning agency Semaeste (in which the city holds a majority stake) inaugurated a program called “Vital’Quartier,” through which properties in certain neighborhoods are purchased and rented with particular uses in mind. So it is that 37 rue Monge and 1 rue Frédéric Sauton, both in the city’s famous Latin Quarter, are currently for rent – but only for bookstore uses. These storefronts, like others under Vital’Quartier’s control, constitute a kind of bulwark against the wave of schlocky tourist shops that have damaged the area’s aura of authenticity. Other addresses are prioritized for artisans, or bakeries. Semaeste owns over 350 properties in Paris.

It doesn’t hurt that France’s national government fixed a price floor for books in 1981, preventing chain stores and later Amazon from undercutting small shops. It also requires many businesses to provide employees with “tickets resto,” or restaurant vouchers, which encourage workers to have lunch outside the office. About 3 million French workers use the checks to pay for lunch each day.

In the United Kingdom, a new national effort is underway to save pubs, which the Campaign for Real Ale estimates are closing at a rate of 18 per week. Seven thousand pubs have shut since 2008, and one in five U.K. pubs has closed over the past 20 years.

The Brits have been less sympathetic, of late, to municipal intervention in societal interest than their counterparts across the Channel. (No such thing as society, as Margaret Thatcher said.) But the rapid decline of the pub, since Thatcher’s deregulation of the industry in 1989, has touched a nerve. Enterprise and Punch Taverns, two of the conglomerates that have become the cartoon villains of pub decline, now own more than 8,000 pubs apiece. Unlike the breweries that once controlled the pub industry, the pubcos, critics say, are eager to convert pubs to more profitable uses.

A new law, enacted last year, aims to halt the decline by giving legal acknowledgment to the role of the pub in British communities. Three hundred pubs are now classified as “community assets,” which means that if a pub goes up for sale, a municipality may pause the sale and attempt to organize a bid of its own. (This being the U.K., the Community Right to Bid also applies to soccer stadiums.)

What makes this process distinct from other urban revitalization funding programs, such as the recent efforts to aid the U.K.’s fading commercial corridors, is that many pubs are vulnerable not because their area is struggling, but because it’s booming.

That will be a predicament familiar to residents of San Francisco, whose law restricting chain stores like Starbucks, American Apparel and Pinkberry is among the most restrictive in the nation. It’s also a growing concern on New York’s Upper West Side, where banks and drug store chains have gobbled up small shops and diners. That’s why, in 2012, the NYC City Council approved a zoning change that limits street-level storefronts on over 90 blocks of Broadway, Amsterdam Avenue and Columbus Avenue to a width of 40 feet. Banks are limited to 25 feet. The legislation is designed to limit the impact of chains on commercial real estate.

There’s more comprehensive legislation on the subject, too, in the Small Business Jobs Survival Act, which would give commercial tenants more power in their negotiations with landlords. But it has been stalled in the City Council since being introduced five years ago, and its future seems murky.

In fact, some version of the bill has hovered in the corridors of City Hall for decades. It was first proposed in current form in 1986, but the idea of commercial rent control in the city dates as far back as the 1920s. A similar law in Berkeley, Calif., was on the books for six years in the 1980s before it was found unconstitutional by the California Supreme Court.

Such a law would help existing businesses and hurt commercial landlords. Whether a more static retail landscape would also slow gentrification is harder to predict.

If it’s going to become law, it will need an advocate who can get the attention of Bill de Blasio and the City Council. Is Spike Lee available?