A thrilling documentary makes science look awesome. But does this tremendous discovery mean "the end of physics"? 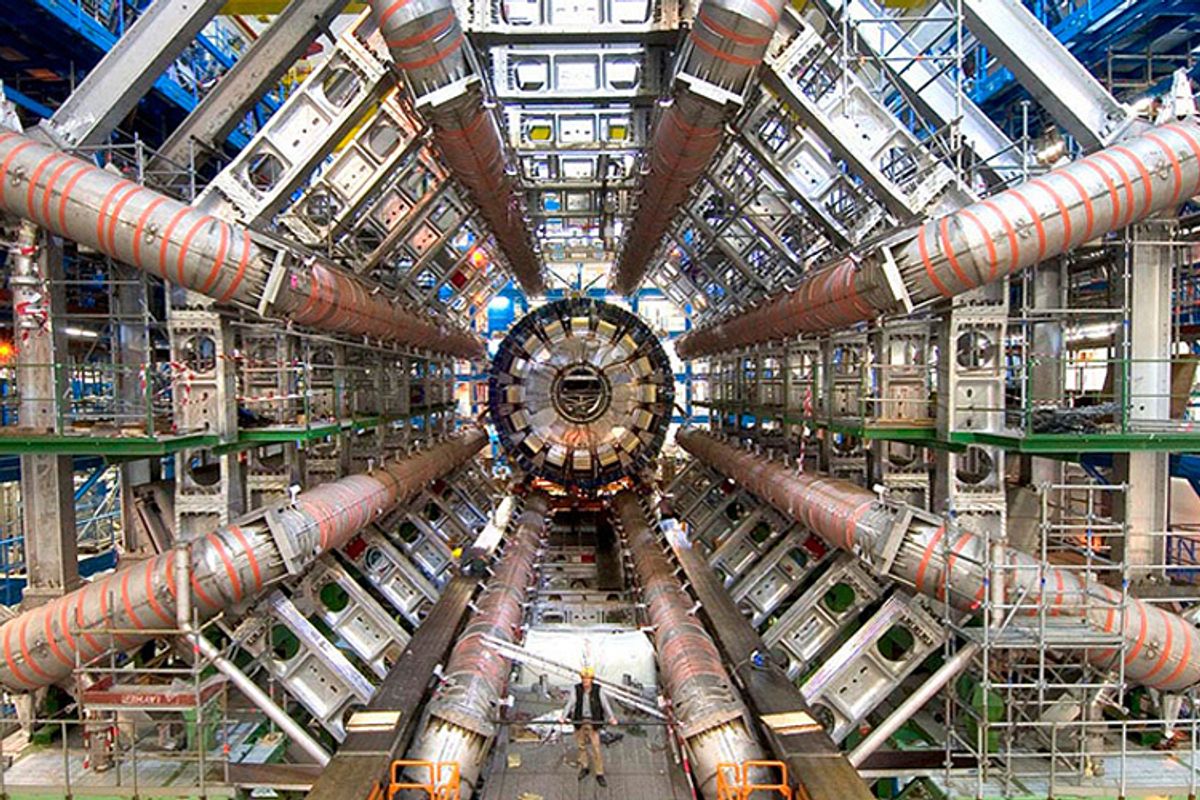 It’s not clear how much a movie like Mark Levinson’s documentary “Particle Fever,” which depicts the 2012 discovery of the fabled Higgs boson – the Holy Grail of particle physics -- primarily as an exciting tale of human ambition and human endeavor, actually helps laypeople grasp the underlying science. It may, however, do something even more valuable by making the greatest scientific achievement of our young century come alive, and by making the theoretical and experimental frontiers of physics seem so urgent, so necessary and so profoundly cool.

Beyond that, “Particle Fever” illustrates the great strength and resilience of the scientific method, with its time-honored propensity for proving wrong the best guesses of brilliant minds. As the Stanford physicist Savas Dimopoulos tells Levinson’s camera, a career in science is often about being wrong over and over and over again, and continuing to learn from those errors. This has a profound personal resonance for Dimopoulos, who openly discusses the fact that the Higgs experiments performed so far within the Large Hadron Collider or LHC, a 17-mile tunnel beneath the Franco-Swiss border, suggest that he has spent 30 years pursuing a theoretical model that is quite likely incorrect or insufficient. In the American context of bizarre public attacks on science by creationists and climate-change deniers who can never be proven wrong by any evidence they are likely to accept, the grace and dignity of this eminent scientist provide an especially worthwhile lesson.

While scientists rarely think in terms of nationality, and the LHC experiments were conceived and executed as a global effort, the Higgs discovery is unquestionably a triumph for the European Union and for CERN, the European nuclear research agency. Until the early ’90s, the United States was in the forefront of physics research, and Congress had committed $4 billion to build the Superconducting Super Collider (planned to be much larger than the LHC) near Waxahachie, Texas. In an abrupt turnabout, budget hawks killed the project in 1993, over the extremely mild protests of President Bill Clinton. Levinson sneaks in a few clips of right-wing congressmen mocking the entire premise: Hell, why should we research the origins of the universe, when it’s all in the Bible? In fact, religious antagonism was only one factor in the death of the SSC. As Nobel-winning physicist Steven Weinberg has pointed out, its demise reflected a larger social and economic crisis around the status of science in American society, one that continues to plague us today.

Most of us outside the discipline of physics can only understand the theoretical backdrop of the quest for the Higgs, and the debates and conundrums arising from its apparent discovery, in simplified or metaphorical terms. The existence of the boson itself is taken as evidence of the “Higgs field,” which breaks certain laws of symmetry that otherwise hold in the universe and permits various elementary particles to possess mass, ultimately making structures like atoms and stars and cats and Kim Kardashian possible. (I think that’s correct so far, and I’d better not try to go any further.) That’s obviously pretty damned important, but it remains way too easy for those of us who don’t really understand the science to get seduced by philosophical or theological questions that hold little interest for physicists, and lie outside the purview of science in any event. Despite its unfortunate pop-science labeling as the “God particle,” the Higgs has nothing to say about the existence or nonexistence of a deity. Those who want to seize upon the ambiguities of cutting-edge physics as evidence for “intelligent design” are free to do so, but from the scientific point of view – and even from the most sophisticated theological point of view, I suspect – that’s a leap to an untestable, unfalsifiable and essentially uninteresting position, about which nobody can say anything except, “OK, maybe.”

Still, in a society as scientifically illiterate as ours, where creationists and the less overtly insane but arguably more dangerous climate-truthers too often get “equal time,” or are presented as parallel antagonists in a nonexistent debate, the bracing scientific rigor and intellectual derring-do presented in “Particle Fever” are most welcome. Levinson himself is a former physicist, and the film was also produced by Johns Hopkins theoretical physicist David Kaplan, who serves as its part-time narrator and charismatic, self-effacing star. (Confusingly, he is one of two particle physicists named David Kaplan, both of whom are working on Higgs-related topics. That suggests some quantum-physics joke I am not qualified to make: Can we ever know the mass and momentum of both David Kaplans simultaneously?)

Kaplan gets several of the best moments in “Particle Fever,” including a scene at a public forum early in the film where an economist asks him what the economic or social benefits of the hunt for the Higgs particle might be. “The answer is very simple,” Kaplan says. “I have no idea.” When radio waves were discovered, he points out, no one knew that they would become commercially important. That gets applause, but not as much as when he adds that while scientific progress has almost always driven economic development, that’s never knowable in advance and it’s not the right reason to pursue it. Late in the film, Kaplan is driving a car and ruminating aloud on the fact that, like Dimopoulos, he has long favored a grand theoretical extension of particle physics known as supersymmetry, which the details of the Higgs discovery has put in grave jeopardy. He pauses a moment and then says: “And that’s pretty cool.”

Levinson bounces back and forth between the two interdependent realms of physics research, the theoretical and the experimental. Theorists like Kaplan or his friend Nima Arkami-Hamed, a Princeton scholar who inclines toward the “multiverse” model – the anti-supersymmetrical idea that our universe is just one bubble in an almost limitless bathtub full of bubbles -- create complex mathematical models that may shed light on the many unexplained mysteries of physical reality. But without experimental physicists like Fabiola Gianotti and Monica Dunford, who helped design, build and run the breathtaking LHC -- apparently the largest and most sophisticated machine ever built by human beings – their theoretical models could never be anything more than extremely well-informed speculation.

Both sides of the equation are spectacular in different ways. Though their work is grounded in rigorous number-crunching, Arkami-Hamed and Kaplan are working at the intellectual leading edge of physics, in territory that once would have sounded more like theology or science fiction. (Indeed, to some scientists the “multiverse” hypothesis, which may be untestable and unfalsifiable, still feels that way.) How do we account for the fine-tuning of the universe, for the fact that the Big Bang and the subsequent events produced stars, planets and ultimately organic life forms, when there seems to be no inevitable or inescapable reason why it should have turned out that way? (Of course, as various progenitors of the “anthropic principle” have noted, the only possible universe we can observe is one that has evolved to have observers in it.) Supersymmetry and the multiverse hypothesis supply different potential answers: Maybe there is an inherent and immutable order and we just can’t see it yet, or maybe we just happen to live in a “lucky” universe, surrounded by kazillions of others that are balls of gas or goo without matter or life.

But it’s especially exciting to see what experimental physicists like the young American Dunford and her Italian boss Gianotti have accomplished (it’s wonderful how many women work in this field now) with a combination of ultra-high technology and old-fashioned nuts-and-bolts engineering. The LHC itself is not just a magnificent scientific achievement but a monumental, beautiful and indeed artisanal object (largely built by hand) that has brought together thousands of scientists, engineers and technicians from all over the world. As Kaplan notes, Iranians have worked alongside Israelis, Indians alongside Pakistanis and Russians alongside Americans, all in pursuit of a tiny, unstable thingummy with no spin and no electrical charge that exists for a barely measurable amount of time. You don’t need to understand the physics to feel the immense collective excitement when the LHC comes online for the first time, and when two separate teams of researchers confirm the discovery of a previously unknown elementary particle with a mass between 125 and 127 giga-electron-volts.

It’s that number, by the way, that poses grave problems for the supersymmetry hypothesis, and may even lead, Kaplan fears, to “the end of physics.” (If the multiverse theory is correct, we may be running out of particles to discover in the individual bubble of our own universe, but have no realistic hope of being able to look outside it.) That’s only one perspective, and even a cursory reading of science magazines and physics blogs reveals a tremendous amount of debate about the Higgs discovery – there’s a vocal minority that doubts the new particle even is the Higgs – and about where physics will go, or should go, from here. If I had to guess, I would say that “Particle Fever” will fire up a whole bunch of future scientists – I’m taking my kids this weekend – and if it captures the end of one era, it may lead to the birth of another.