The story of Joshua Lederbeg, who with a young Carl Sagan helped pioneer the search for extraterrestrial life 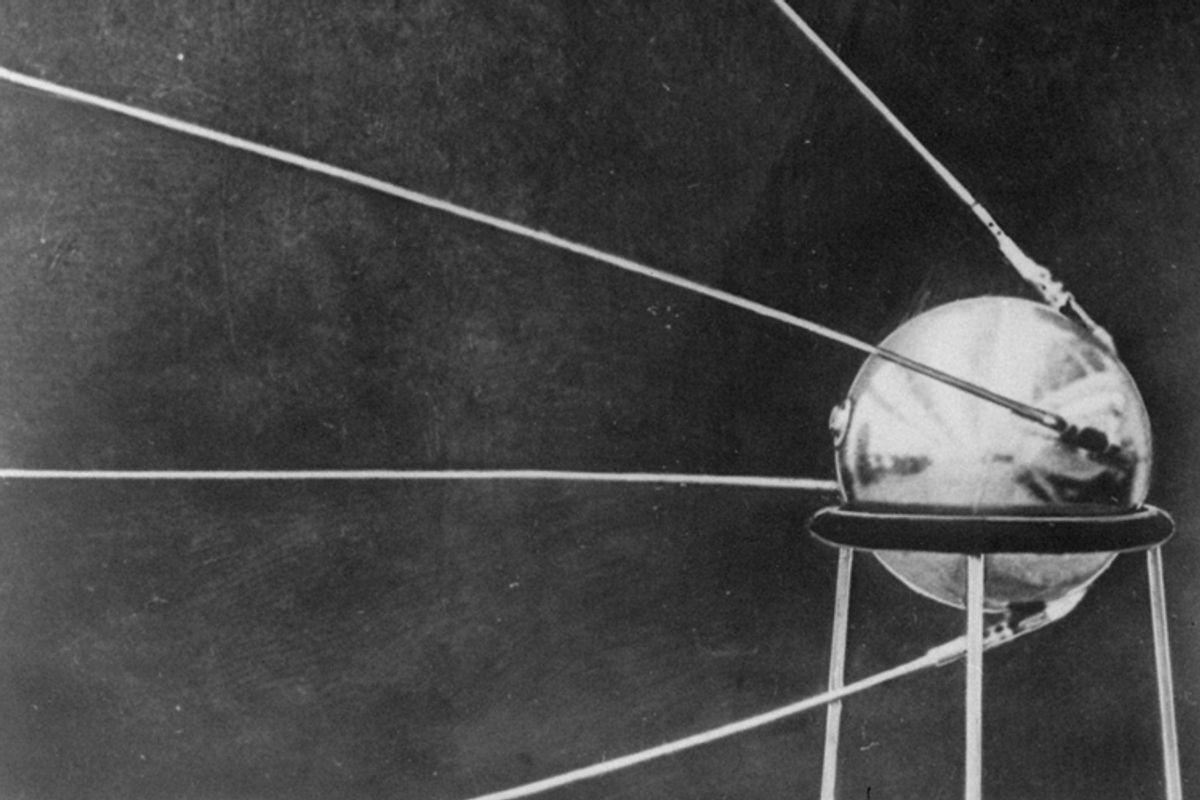 This first official picture of the Soviet satellite Sputnik I was issued in Moscow October 9, 1957, showing the four-antennaed satellite resting on a three-legged pedestal. (AP/Zentralbild Picture Service)
--

Astronomy and biology have been circling each other with timid infatuation since the first time a human thought about the possibility of other worlds and other suns. But the melding of the two into the modern field of astrobiology really began on Oct. 4, 1957, when a 23-inch aluminum sphere called Sputnik 1 lofted into low Earth orbit from the desert steppe of the Kazakh Republic. Over the following weeks its gently beeping radio signal heralded a new and very uncertain world. Three months later it came tumbling back through the atmosphere, and humanity’s small evolutionary bump was set on a trajectory never before seen in 4 billion years of terrestrial history.

At the time of the ascent of Sputnik, a 32-year-old American called Joshua Lederberg was working in Australia as a visiting professor at the University of Melbourne. Born in 1925 to immigrant parents in New Jersey, Lederberg was a prodigy. Quick-witted, generous, and with an incredible ability to retain information, he blazed through high school and was enrolled at Columbia University by the time he was 15. Earning a degree in zoology and moving on to medical studies, his research interests diverted him to Yale. There, at age 21, he helped research the nascent field of microbial genetics, with work on bacterial gene transfer that would later earn him a share of the 1958 Nobel Prize.1,2

Like the rest of the planet, Australia was transfixed by the Soviet launch; as much for the show of technological prowess as for the fact that a superpower was now also capable of easily lobbing thermonuclear warheads across continents. But, unlike the people around him, Lederberg’s thoughts were galvanized in a different direction. He immediately knew that another type of invisible wall had been breached, a wall that might be keeping even more deadly things at bay, as well as incredible scientific opportunities.

If humans were about to travel in space, we were also about to spread terrestrial organisms to other planets, and conceivably bring alien pathogens back to Earth. As Lederberg saw it, either we were poised to destroy indigenous life-forms across our solar system, or ourselves. Neither was an acceptable option. When he returned to the United States he quickly threw himself into learning all he could about astronomy and rocketry, and began writing urgent letters to the National Academy of Sciences, alerting his colleagues to the imminent danger.

By the spring of 1958, Lederberg’s warning of a “cosmic catastrophe” was starting to make people sit up and pay attention. But this pot-stirring wasn’t just about scaring researchers and policy makers. It also marked the birth of a new type of science that could take place outside the usual bounds of the planet. In his own words, “I was the only biologist at the time who seemed to take the idea of extraterrestrial exploration seriously.” His considerable reputation didn’t hurt, and in the following years Lederberg managed to place biological investigations squarely on a fledgling NASA’s agenda, coining a new term along the way, “exobiology”—the study of life beyond the Earth.

Exobiology profoundly influenced the way space exploration was conducted. Strict protocols were developed for the sterilization of spacecraft, and for quarantines to restrict what they might bring back. NASA built clean rooms, and technicians swabbed and baked equipment before sealing it up for launch. Scientists got to work and hurriedly computed the acceptable risks for biological contamination of other worlds. One of the standards developed stated that a mission must present no more than a 1 in 10,000 chance of disrupting an alien ecosystem, a somewhat arbitrary choice that perhaps says more about our tolerance for messing up planets than anything else.

Later, upon the triumphant return of Apollo 11, instead of being paraded, the astronauts were promptly locked up in a converted Airstream trailer for three weeks of careful isolation. There is a well-known picture of President Nixon grinning at Armstrong, Aldrin, and Collins, all safely behind the trailer’s airtight window, and perhaps happier for it. Eventually, after Apollo 14, it became clear that the lunar surface environment was effectively sterile, and so future quarantines were skipped.

Lederberg wasn’t finished though. He and the young Carl Sagan had become friends in the early 1960s, and together they helped define the emerging fields of solar system exploration and the search for extraterrestrial life. In 1965, NASA’s Mariner 4 spacecraft sped by Mars, sending back the first close up images of a desolate and cratered world, an arid desert planet. No vegetation, no civilization, barely an atmosphere. It was a pivotal moment, far removed from earlier optimism about life in our solar system, and it made clear how demanding biological exploration was going to be—if there were clues to life out there, they were going to be found with a microscope. In light of this information Lederberg, Sagan, and others spurred advanced conceptual and experimental work on microbial and chemical assays that would culminate with the spectacular Viking missions to Mars in 1976. These twin landers carried highly sensitive automated wet labs, specifically for incubating and detecting microbial organisms that could be lurking in its red soil—one of the last reasonable refuges for life in this inhospitable place.

However, for all their sophistication, in many respects the Viking missions to Mars also represented the end of Lederberg’s brand of exobiology. The landers’ attempts to spot microorganisms, or any sort of organisms, didn’t pan out. The biological tests gave confusing and unexpected results, now generally considered to be a consequence of the rather fearsome chemistry of the upper soil—full of nasty oxidants akin to substances used in rocket fuel. Viking made it clear that finding life beyond the Earth was going to be vastly more challenging than hoped—or feared.

Partly in response, partly as a natural evolution, the specialized study of exobiology began morphing into a much larger scientific fishing net. It co-opted everything, from terrestrial microbiology and the origins of life, to interstellar chemistry, planetary physics, and even a smattering of cosmology. This wasn’t an easy transformation. It was a field with pitifully little data. But much of the impetus of Lederberg’s original vision remained; these were profound questions, and appetites had been whetted. In the U.S., NASA stuck to its guns, supporting an unprecedented array of interdisciplinary studies ranging from evolutionary biology to astrochemistry; actively seeking out science that would otherwise fall through the cracks of conventional funding programs.

In the late 1970s and into the ’80s, scientists’ imaginations were reignited by the discovery of terrestrial organisms living in remarkably extreme environments. Microbes and larger creatures were found supping the noxious super-heated effluvia of volcanic vent systems, kilometers down in the world’s oceans. Elsewhere, bacteria were identified that readily survived desiccation, ionizing radiation, and freezing. Carl Woese and other scientists identified the great domain of archaea and provoked a host of new ideas on the origins of life, and Thomas Gold talked about the insinuation of life into subsurface planetary environments. There was a sense that we had overlooked much about life on Earth, and that meant we might have overlooked much about life elsewhere too.

By the 1990s the term exobiology was barely adequate to convey the scope of scientists’ questions, and the effort was re-branded as “astrobiology,” a full-on merger of astronomy and biology. It had become the quest to understand life as a truly cosmic phenomenon—a pan-disciplinary adventure that started taking shape just as the first bona fide planets were discovered orbiting other Sun-like stars in 1995.

In retrospect, it was an incredibly fortuitous chain of events that led up to this point, beginning with bacteria and Sputnik, and ending with exoplanets. Had the timing been different we could have unwittingly bumbled around contaminating the solar system left and right, far beyond any natural diaspora. In doing so we’d have hindered, possibly squandered, the opportunity to examine the indigenous life that might exist on other worlds.

Instead, we sipped a cocktail of Cold War posturing and paranoia, garnished with Lederberg’s quick-witted thinking. This put the superpower space race into a bio-containment lockdown, but it also bought time to look more closely and carefully at other worlds. And had we not quickly sobered up with those early visits to Mars, and even Venus, we’d have missed the deeper implications about life’s abundance. Life is not a given, its frequency on the cosmic stage is a vital statistic to learn, but gaining that knowledge is one of the greatest scientific challenges of all time. For these reasons astrobiology is arguably both the luckiest and the unluckiest scientific field of the past hundred years.

The venture can still be a slightly uneasy partnership; biologists and astronomers don’t always see eye-to-eye on scientific priorities. But we deal with it, because in many respects Lederberg’s original motivation to protect and preserve is also more urgent than ever. We’re not just looking to discover life’s cosmic abundance, we’re also looking to place our own world in proper context, to understand it well enough to try to plot a stable course through the environmental changes that we’re carelessly, and probably needlessly, making.

Here too is a hint to the greatest union, the one yet to come. We now know for a fact that Mars has at times been a far more temperate place. We also know that our solar system does not harbor the kinds of planets that may be most numerous in the galaxy, those a little larger than Earth. Such worlds exhibit extraordinary diversity, even when examined with our currently primitive data. Some are dense and rocky, or strange places with gas-rich envelopes. Others perhaps have radically different geochemistry, where carbon, not silicon, is the bedrock. One day soon we’ll have to find a way to explain our place within that planetary menagerie, and maybe we’ll have to explain our place within an extraterrestrial biological menagerie too. That will be the ultimate merger of knowledge, the placement of Earth’s life on the cosmic stage—when astrobiology finally comes out of the cold.