As a popular Dem governor politicks at his party convention, he runs into unexpected turbulence (UPDATED) 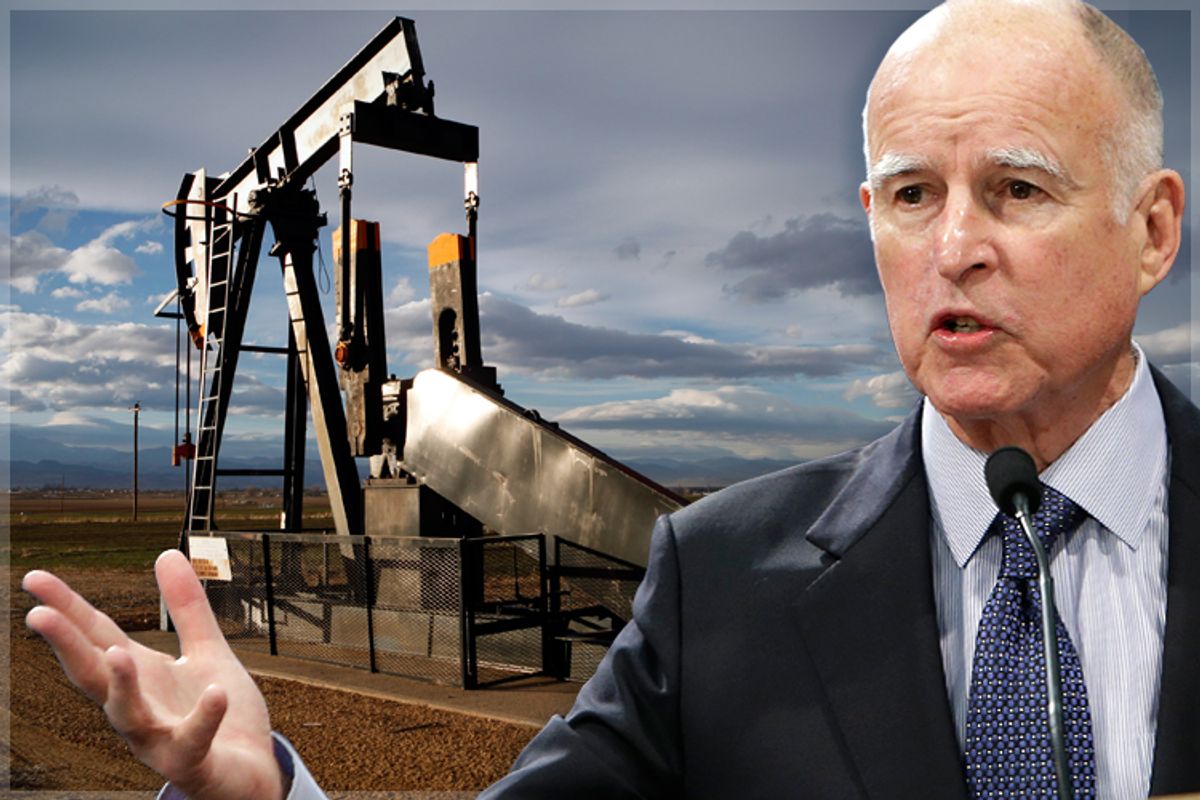 The California Democratic Party convention is normally a pre-scripted affair, where the press gets copies of the speeches in advance and writes their stories before the politicians deliver them. However, this weekend’s convention in Los Angeles exploded into an unusually vocal battle over fracking, revealing tensions between the elected leadership and the party rank-and-file.

Similar debates have played out among Democrats across the country, with activists no longer allowing establishment figures to talk about stopping climate change out of one side of their mouth and support what they see as a devastating attack on the climate with the other.

A few years ago, California had no regulations at all against fracking, and an unknown number of companies were already injecting liquids at high pressure to release natural resources hidden in shale rock. In California, fracking is not generally done for natural gas, but oil, most of it in the Monterey shale, a massive sedimentary formation in the central part of the state. This region contains, by some estimates, more than half of the recoverable shale oil in the United States, and as such represents a bonanza for oil companies.

“Some of our oil is dirtier than the Canadian tar sands,” said RL Miller, the head of the state party’s environmental caucus and a key anti-fracking activist, noting the intensity of energy needed to recover the thick oil out of the Monterey Shale. “In my mind fracking for that oil is as bad as the Keystone pipeline.” In addition to the environmental costs, engaging in the seismically volatile activity in a known earthquake zone unsettled many in the state, including normally conservative local farmers.

Activists sought a moratorium on fracking, but have been consistently stymied. Proposed regulations were defeated in the state Legislature in 2012, and the eventual bill that passed in 2013 was a weak alternative. It did mandate disclosure of fracking activities and the chemicals used in fracking, and would pre-test water wells near fracking sites before and after production to examine changes to water quality. But the rules won’t take effect until 2015, and an environmental impact study was similarly delayed as well.

Critics consider the bill a poor substitute, resentful that a Legislature dominated by Democrats would produce regulations with such deference to the oil industry. Many blame Gov. Jerry Brown for orchestrating the opposition to stronger regulations, and they vowed to continue their fight for an outright ban. A bill, SB1132, has been introduced that would pause fracking in the state until the release of the 2015 environmental impact report.

The activist work on fracking was in evidence in Los Angeles. A packed environmental caucus on Friday night featured an unlikely set of establishment politicians supporting the moratorium, including Eric Bauman, vice chairman of the state party, and John Perez, speaker of the Assembly last year when the weaker regulations passed. Perez, now running for state controller, told the caucus he would push the moratorium through the Assembly this year. Some activists viewed this with skepticism. “When I went to Perez’ office a year ago to ask him to put the moratorium back in the bill, his staff said he had no power to do it,” said Dorothy Reik, a state party delegate and anti-fracking activist. Now when he’s a lame duck, all of a sudden he has the power.”

Miller and her colleagues targeted Gov. Brown’s Saturday keynote address, printing up signs that read “Another Democrat Against Fracking” and planning a silent protest, holding up the signs during the speech. Security personnel at the morning session confiscated a number of the signs, but many made their way through to the convention floor. Miller herself was briefly asked to leave the hall but returned without the signs.

Brown, who announced and will likely win a bid for an unprecedented fourth term as governor, began his address amid a smattering of anti-fracking signs in the audience. Still, Brown’s speech was well received, until he began to discuss the state’s historic drought. Stressing the importance of water conservation, when fracking is incredibly water-intensive, struck some as discordant. “Fracking uses millions of gallons of water and then pollutes that water so it cannot be reused,” Dan Jacobson of Environment California told Salon. “Do we want to start to invest in an industry that uses so much water?”

The expected silent protest suddenly became vocal. Persistent shouts of “No Fracking!” seemed to rattle the normally sure-footed Brown. “All you guys who like to make noise, just listen a moment,” Brown said, trying to steer the audience back around to his points about fighting climate change with a range of solutions. But he had lost the crowd by then, as the slogans and shouts increased. He concluded by saying, “Thanks a lot, and keep protesting, but add a bunch more stuff.” You can watch video of the speech here.

Brown does have a climate record to tout, with his support for the state’s cap-and-trade system, his at times lonely advocacy for high-speed rail, and continued investments in renewable energy. “I support everything he said that he’s doing,” said RL Miller after the speech. “But climate leaders don’t frack.”

Just a couple of hours after Brown’s speech, billionaire former hedge fund manager Tom Steyer, who plans to spend up to $100 million in campaign ads this year pressuring lawmakers to fight climate change, addressed the convention. He called for legislation that would force oil companies to get approval for fracking from counties through a public vote, requiring a two-thirds threshold. This is the same threshold that the state and local communities in California must secure to raise taxes. Steyer argued that fracking effectively imposes a tax on the public because of the health and safety costs that result from it, and so the public deserves the same protections as businesses enjoy. “This two-thirds vote requirement will empower local communities to secure the safety and health provisions their people deserve,” he said. “It will give communities the right to determine whether fracking is really in their interest.”

Steyer told reporters after the speech that he didn’t coordinate his message on fracking with the protest. “We didn’t write this speech in the two hours in between us and Governor Brown’s,” he said, adding that he’s never talked about fracking with Brown. But he did connect his vision for holding oil companies accountable with a growing anti-fracking movement. “I think that all over the United States, there’s a move toward local empowerment,” Steyer said. “We’re hoping that the Legislature is going to act on this, because these seem like very straightforward and common-sense things to do that would be good for our economy and our state.”

Gov. Brown, a fairly stubborn politician, is unlikely to be moved by such a public display of opposition, even as an anti-fracking rally scheduled next week in Sacramento gets thousands of sign-ups. But the tide around Brown has turned. Keep in mind that the crowd at a state party convention is made up of party stalwarts, inclined to support top officials almost unreservedly. That this became the site of a backlash speaks to the intensity of opposition to fracking inside the party, an intensity that’s bound to grow over time. With California the only major oil-producing state without a tax on oil extraction, and with Monterey shale fracking on the industry’s agenda, this issue is sure to percolate in the state for the next few years, and activists have grass-roots support and the funds to act on their side.

In fact, on Sunday delegates passed a fracking moratorium in the plank of the state party platform, a useful tool for getting the Democratic-led Legislature to pass the moratorium bill.

Politicians, and not just Democrats in California but across the country, have a choice to make. They can continue an unholy alliance with the oil industry, trading environmental stability for a promise of jobs, and hiding behind rhetoric about stopping climate change while allowing fracking to flourish. Or they can listen to increasing unrest among the public, and align their stated desire to protect the planet with their actions.

UPDATE: To clarify, while final rules for fracking in California will not get finalized until next year, a number of emergency regulations did get implemented this January - a few months after passage - including water testing, disclosure of fracking sites and tracking of chemicals.