The secret to group sex that no one tells you: You can -- and should -- say no. I learned this lesson firsthand 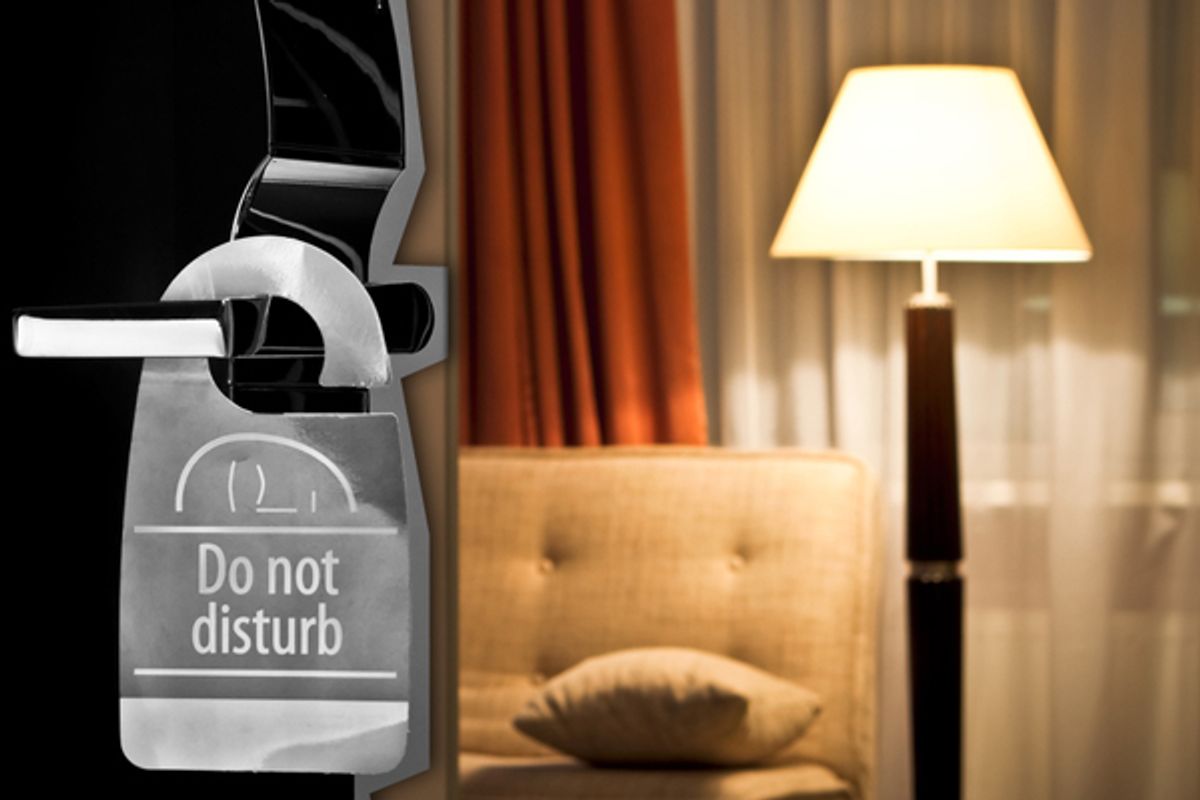 The night of February 14th, I washed my hair with lavender Dr. Bronner’s; cut my fingernails and painted my toenails poppy-red; shaved my legs and labia, hopping on one foot in my tiny shower; picked out a pair of silky underwear; and then very carefully, so as to not tear the nylons, rolled on a pair of black thigh highs, which I clipped to a seventy-five dollar garter belt I bought online my freshman year of college.

Then I pulled a dress over my head and went on my way to the designated address, which had come enclosed in a second missive, and included a phone number. The cold winter air blew up my skirt and moved between my legs.

Bonobo monkeys are known to greet each other with oral sex, hence the title of the book, The Bonobo Handshake, wherein the handshake is actually cunnilingus. This is far better than the human greeting of oral circle-jerking. The 2010 pop-evolutionary psychology book Sex At Dawn made waves for comparing human and bonobo sexuality — one of its main arguments was that monogamy is against human nature. Hey, birds do it. Bees do it. Even the trees do it. So wanna screw? The point being: our sexual hang-ups are social constructions, and it might be best if we did as the bonobos do.

The sex party was held at an apartment, the host — dressed in a robe that was tied loosely at his waist, and revealed a long stretch of hairy leg — ushering us into a living room dimly lit with candles and a floor lamp turned to its lowest setting. If you are wondering, we shook hands like people, not bonobos.

The apartment smelled like incense, smoke rising in white columns from pillars that were burning all over the room. I found it thoughtful that they provided something to help us forget how our bodies smelled as they worked. There was wine and candies, conversation hearts mixed with chocolates and caramels from a box. Condoms and lube were strewn throughout the apartment, also like candy. I poured myself a glass of white, downed it faster than I probably should have, and poured another.

I knew perhaps 10 to 20 percent of the people in the room. Because we are all still socialized into thinking of sex as something shameful and private, we lingered with our glasses of wine, talking around the fact. We stood around for what seemed like far too long, fully dressed, chatting and introducing ourselves; getting antsy. Occasionally, one of us would stroke another, along the arm or down the back in a smooth, long gesture. Later in the night this would turn into a signal — a shall we? — but for now it was just a reminder of what we had all come for.

Then, because I am always the first to do such things, I took off my dress, pulling it over my head. Like a chain reaction, shirts and jeans popped off all around me, the room growing a fleshier shade of warm. A couple that had come as a pair started kissing. A girl in sparkly lingerie wrote the night’s safe word — cacao, after the Portlandia skit — on the heart-shaped insert that had come in the box of chocolates, and hung it on the wall.

Group sex induces a fugue state of touching, where your vision tunnels into a starry blur of hands and mouths and your vocabulary narrows, by necessity, into yes, no, please, stop, and harder. After my fifth glass of wine I decided I wanted to lie down and have people grope me gently, as though I were Marina Abramović performing Rhythm 0, unrated and uncut. I lay down on a futon that had been folded out for the night and put my arms above my head, where my hands dangled off the frame.

Somewhere above my head, people were kissing. A girl asked to remove my underwear, which I would lose in the apartment, and walk home without later that night.

In spring of 2012, an acquaintance of mine was preparing for a performance piece in which she would return all gestures directed at her. If the participant took their shirt off, so would she. If they kissed her, she would kiss back. “What if someone penetrates me?” she wondered aloud. “How would I penetrate them back?” I didn’t think she had anything to worry about, but two years later, I can say that there are many ways to penetrate someone, and I think I saw most of them that night.

How many people can be engaged in full coitus in a two-bedroom apartment? Quite a few, as it turns out. Two couples on the futon; one on the couch, bent over and standing, curiously, instead of horizontal; another two can fit on the giant beanbag the host dubbed the Love Sack, which measures at least five feet in every direction and is made of memory foam, to better embrace your body as it is railed into the sack. This in the living room alone.

Anyway, I did meet someone. It was the handcuffs that did it: he had brought a pair, I mean, and he was sad that he hadn’t found a chance to use them, and I perked up at that and went to join him across the room, where I held the cuffs in my hands and played with their shiny black metal tongues. I clipped one on my wrist, then the other. “How do I get them off?” I asked. He pressed the quick-release tabs and I sprang free, then clicked them back on again. The metal was cool on my skin. I liked the way the chain swung between my wrists.

Because we were at a sex party, we had sex; if we had met at any kind of party other than a sex party, I would have spent the rest of the party trying to ensure I would sleep with him after the party. This is what I mean by the social space of the orgy simply removing constraints to the act: it’s more efficient to do it right there. Like bonobos, we shook hands. I knew his name, and he knew mine. I knew he was a tall boy with short blond curls. He knew I was a small girl with long dark hair. He put a condom on and moved around inside me. The chain between my wrists hit itself and made small metallic noises.

After we were done, and I felt shaky and happy and turned inside out, we lay on the beanbag and talked. Next to us a gay couple was making the Love Sack quiver with their dual ministrations. On the other side of us a friend of mine was texting; her manicured nails tapped against the smooth screen of her phone. People were starting to leave, pulling clothes on, searching the floor for underwear. My boy left, taking his handcuffs with him; about half an hour later, I left too. I peered under the futon for my panties, but couldn’t find them, so I decided to walk home with nothing under my dress. I hugged the host and my friends. The night was cold and starry, and I walked carefully, to avoid slipping on ice.

The next morning I woke up sore. At brunch, I dished about the party. I mentioned that I had liked the last person I slept with, but didn’t know his full name.

“You should try to get in touch with him,” a friend of mine said. So I did some sleuthing and found him and Googled to make sure I had the right one. I am not on Facebook because it terrifies me.

“How weird is it to email someone after you’ve had sex with them?”

My fingers hovered above the keyboard. School email or Gmail? Subject or (no subject)? How to engage in the foreplay of intimacy when the final boundary of sex had already been crossed the night before, and in public? What to say to someone for whom the only remaining mystery was that of my personhood, and for whom I was not sure I wanted to be a person at all? Was it better to leave it all a mystery?

hey! just wanted to say it was super fun fooling around last night, wanna do that again sometime?