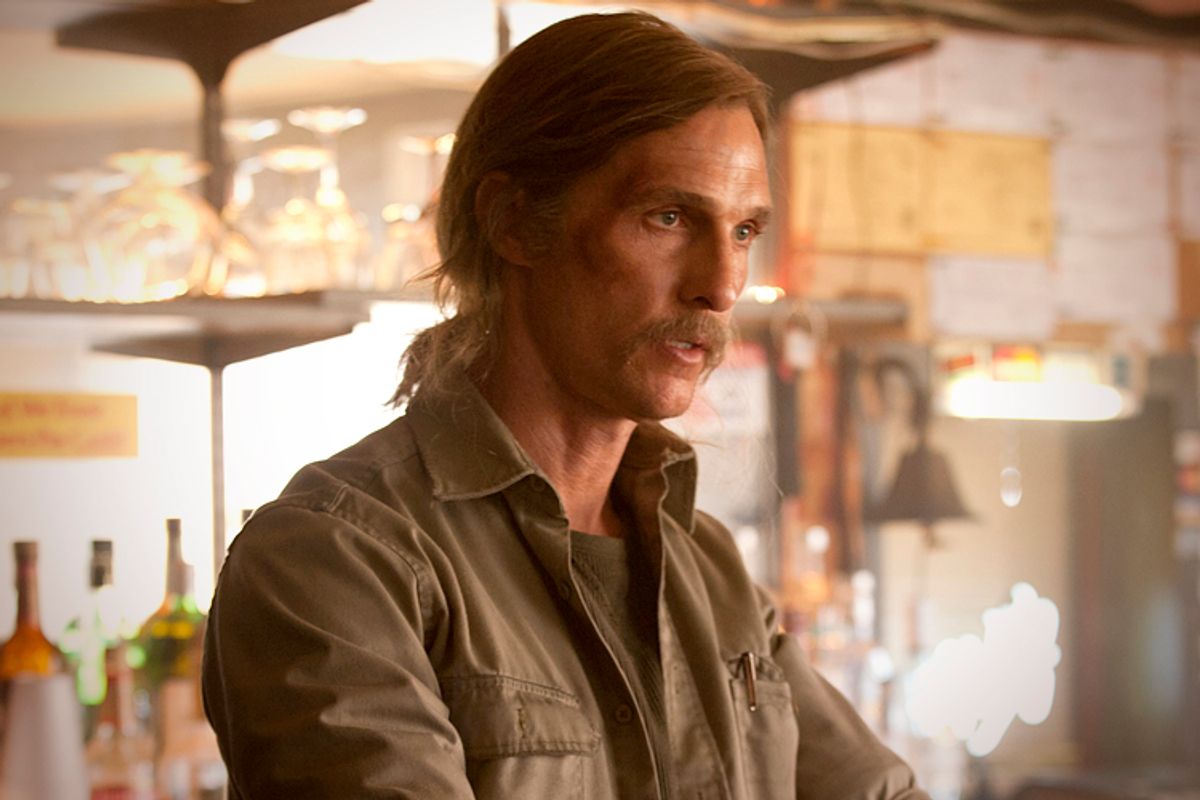 Women were not the only ogled objects in “True Detective.” The bouncing breasts of young ladies, the slut-shaming sex between Maggie and Rust, not to mention the ritualized rapes and abundance of hookers in the series, almost cover up the most compelling, leer-inducing aspect of the show -- the impoverished South.

The series, which ended Sunday to grand-scale ratings, didn't have to take this path. As someone who studies southern Appalachia in popular culture, I have become occasionally numb to the portrayal of other parts of the southern United States, viewing their representation/stereotypes as being less severe. Louisiana in particular.

Louisiana gets heaps of praise. “True Blood” made it sexy and campy. “Treme” showed its heart. The last season of “Top Chef” showcased its deliciousness.

There's another side, though. A bit darker. “Duck Dynasty,” “Gator Boys,” “Cajun Pawn Stars,” “Swamp People,” etc. All reality television series that showcase people living off the land or trying to get by, often downplaying the intelligence of its stars. It paints the state as a different country, with different rules.

But those rules are not as far-flung as “True Detective” might have you believe. Creator Nic Pizzolatto, who grew up in the Lake Charles, La., depicts his hometown as a post-apocalyptic landscape in which the rapes and murders of women and children are covered up by kin connections. He follows what I have deemed the three rules of a Southern horror story: Close Family Relationships, Weird Sex and Malicious Rednecks.

Important note: The more overlap between the above three elements, the better.

Essentially Lake Charles received its own “Deliverance” through the episodes of “True Detective.” Has ever a show depicted such a large number of beaten and bruised female prostitutes? As far as the series reveals, there's no reason that Marty's elementary-school-aged daughter draws graphic pictures of people having sex or sets up her toys to depict a doll getting gang-banged. It's just one of those things kids in rural Louisiana do.

In the second-to-last episode of the series, good ol' boy Errol is reveled to be the bad guy. The cops currently investigating the crime stop to ask him a question, leading Errol to halt his riding lawnmower and slowly start talking about his family. The cops hurriedly leave, and Errol continues to talk, his voice shifting from dimwitted to sinister. His true self is revealed as well as his facial scars.

When you think the sex and assault and combinations thereof have gotten as creepy as they can be, there's the finale. The villain, Errol, fingers his half sister while she recounts a time another family member molested her. The scene is set in the family home, littered with paper, looking a like a hoarder's paradise. Let's not forget that the dad is rotting in one of the rooms. Venn diagram of Southern horror story...achieved.

Of course, these are poor people, very poor people. That seems to be the landscape of Lake Charles. Desolate, seething with factory smog, somewhat remote, down on its luck forever. It's a place where family ties go askew, and the sex does, too. Or at least that's what Pizzolatto would have the rest of country believe, the majority of whom will know the place only from this show.

It's rare to see negative portrayals of large cities on television or in the movies. It's because these locations have the money and therefore the power to portray themselves and their inhabitants well. When it comes to the representation of small towns and rural America, they are at the mercy of the people who reside in these big cities, who often have left these landscapes behind them or never really knew them in the first place.

It's the responsibility of these outsiders to show respect to places and people they portray. Unfortunately, for Louisiana's heel, it might be a long time before it emerges from the impact “True Detective” has made.