How to actually "marry smart"

Susan Patton tells women to find a husband in college. Try this instead: Sleep around! Work hard! Microwave meals! 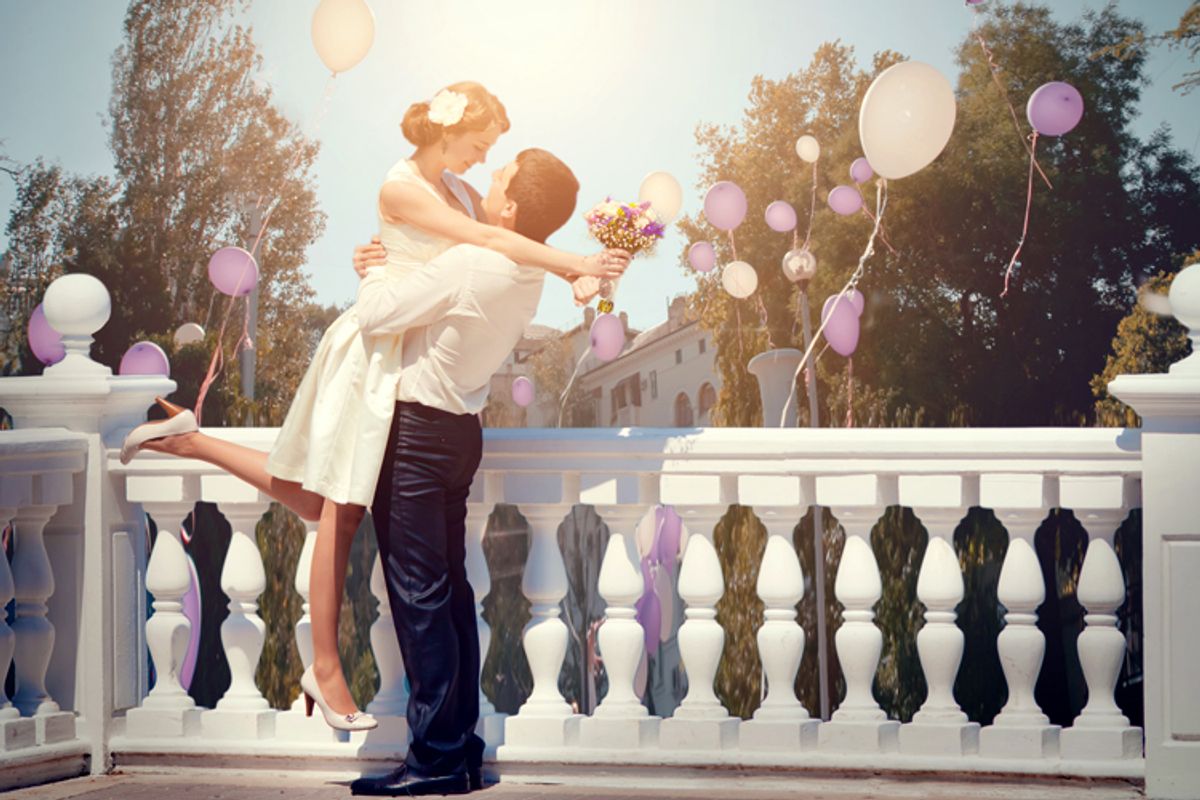 Young single straight women, take cover! Susan Patton is out there flacking for her book, "Marry Smart: Advice for Finding THE ONE." She stopped by the "Today" show this morning to tell college-age women to find a husband immediately -- and also to learn how to bake bread, get plastic surgery in high school and, you know, not get themselves raped, as women are so often wont to do.

It's such patently absurd advice and yet this is exactly the sort of cultural messaging that used to freak me out as a 20-something single straight lady. In acts of self-punishment, I would read these self-appointed gurus, or watch them on the "Today" show spouting their B.S., and genuinely worry that they were right -- that I would end up sad and alone.

I did everything the Susan Pattons of the world said not to do and I ended up marrying a freaking wonderful man -- not despite disobeying these retro rules, but because of it. That's why, amidst all the "Princeton mom" noise, I bring you instructions on how to actually marry smart, according to me. True story, I recently went to the optometrist and she told me, "Your eyes aren't young anymore," so I feel like that makes me at least as qualified as Patton to give life advice.

The microwave is all the lover you need for now. Swing by Walgreens after a long day at the office and pick up a Stouffer’s frozen lasagna. Grab a $9 bottle of white wine while you’re at it. You’ll probably cry into your partially warmed food while watching “Snow Buddies” — those talking pups, so cute! — but one day you will look back at these scenes of early bachelorettehood and smile. This is how you learn to be alone, which you need to do before learning to be together. Sorry, them's the rules.

You know that drug dealer who keeps money in his freezer and doesn’t know where to put apostrophes? Date him. Same with the guy who literally has “I’m a mistake” tattooed on his arm. They are terrifically wrong for you, but they are truly lovely people who will enrich your life. (If they are not truly lovely people, get the hell out of there. Only poor choices with hearts of gold are worth your mistakes.) It’s only from dating these self-styled bad boys that you will realize the folly of making yourself interesting through men. You get to be the protagonist of your own god-damn novel.

Fake so many orgasms. Look, sex in your twenties is going to be horrible. For a long time you won't even realize that sex can be more. You will take pleasure in giving pleasure. It is all the intimacy that you can take, for now. Despite the faking, these are some of the realest, rawest moments of your young life; two unformed people pressing their naked egos against each other.

It's not like you'll have learned all the sex things by the time you get married, either. That's when the learning can really begin. It won't be long before you feel like you need an entirely new word for sex.

Start joking about your shriveling ovaries once you turn 26. Collect plants and pretend that they are your offspring. Impulsively adopt a dog -- and then immediately return it after realizing that you will be evicted from your rent-controlled apartment. Cry so much about what a horrible person you are and how this is the worst thing you've ever done. Self-flagellate about how you can barely take care of yourself, let alone a dog -- let alone a child. Compulsively read trend pieces about "kiddults."

Throw pity-parties with friends. You're all single, bitter and hardened to the disappointing world of romance. Get together to drink cocktails, watch "The Notebook" and bitch about men who don't call. You will go to bed at night alone, but this friendship stuff is great! You just won't appreciate the profound, lifelong importance of it until later.

Mr. Good Enough is not good enough. That guy who seems almost perfect but still doesn't feel right? Trust yourself, dump him and then wallow in sorrow. Call him and leave drunken voicemails about how much you miss him, when the truth is that you're just afraid to be alone. Constantly remind your friends that you're a woman who "wanted too much." When books like "Marry Him: The Case for Settling for Mr. Good Enough" come out, snark it up online. Privately, weep. Later, you will feel sure that you dodged a bullet and thank yourself for being brave.

Facebook-marry a friend. You're both approaching 30, you both feel like you're going to be alone forever, so announce yourself as married, to each other, on Facebook. Plan to platonically raise kids together if neither of you meets the right person. (Conveniently ignore the fact that she doesn't even want kids.) Entertain the idea of a male harem. Now you're just owning this spinster thing. It really doesn't sound so bad anymore.

You know that guy friend you weren't romantically interested in because he was just too nice and available? Suddenly, you're grown up enough to come to your senses. Marry the fuck out of him.