GOP says poor workers should simply get a new job. How about those hating discrimination laws? (UPDATED) 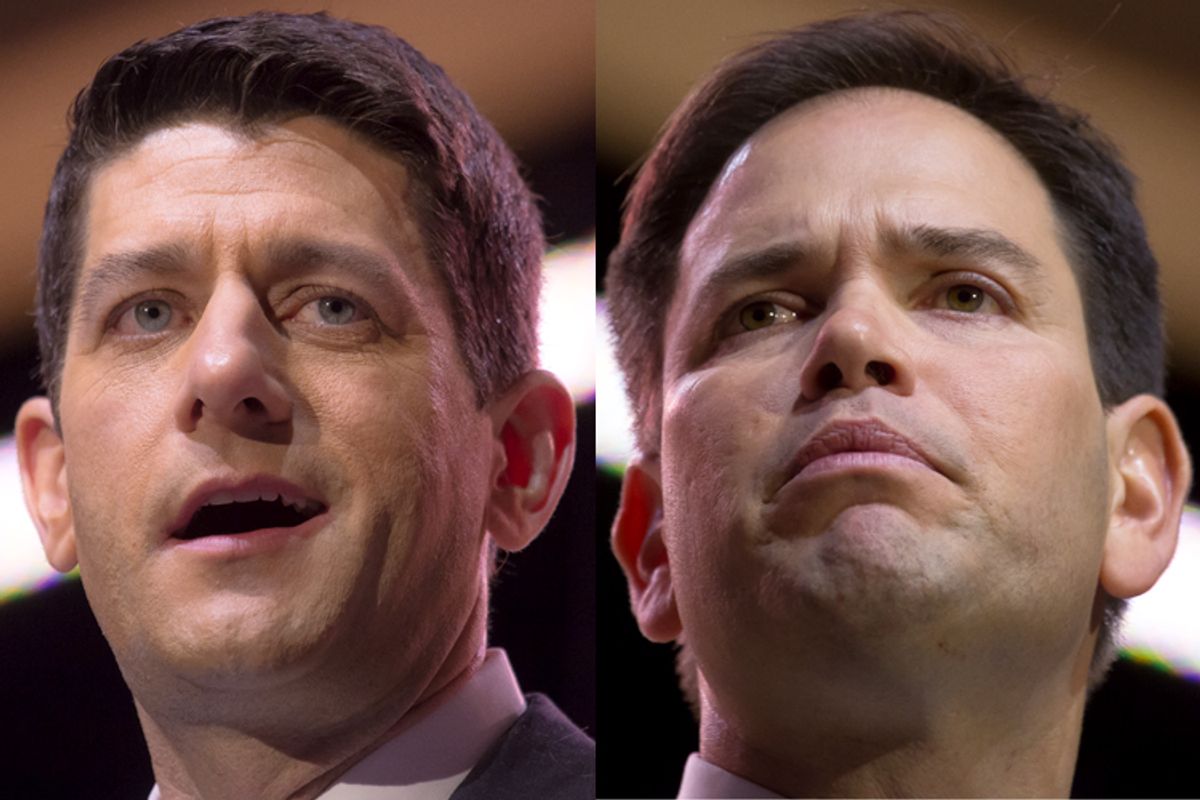 Now that the infamous Arizona “religious liberty” bill that was almost a law has become little more than a memory, conservative media outlets have resorted to contemplating the meaning of its failure. Meditating upon the substance of the bill may seem like little more than post-veto mourning, but the strategy that underlies the proposal of such statutes is still going strong.

That approach, which appears to be of a piece with broader conservative responses to a perceived loss in the culture wars, is to demand exemption from interaction with parties who are viewed as carrying out certain immoral practices. The alternative, in the view of conservatives, is that without legal protections like those proposed in Kansas and Arizona, businesses would be compelled to interact with their moral inferiors.

Commenting on this new tyranny, Ross Douthat wrote in the New York Times, “In this scenario, the unwilling photographer or caterer would be treated like the proprietor of a segregated lunch counter, and face fines or lose his business — which is the intent of recent legal actions against a wedding photographer in New Mexico, a florist in Washington State, and a baker in Colorado.”

Douthat is not alone in his concern that Christian business owners or workers might lose their employment or businesses should they elect not to have market interactions with gay people. But in fact, the Kansas legislation (which has since been abandoned) included language intended to protect against just those possibilities: as Josh Barro explains:

The bill even creates a special new employee right for anti-gay people working in the private sector. Let's say you work for a national chain supermarket with a policy against discriminating on the basis of sexual orientation, and you're asked to make a cake for a gay wedding. Now, you can refuse, and your private employer "shall either promptly provide another employee to provide such service, or shall otherwise ensure that the requested service is provided, if it can be done without undue hardship to the employer."

In fact, not a single conservative proposed that such employees or business owners just find a new job if they don’t like the way current laws are ordered. For the right wing, this is a strange turn.

When it comes to raising the minimum wage, for instance, conservatives and libertarians tend to simply maintain that employees who want more money than they’re making should get new jobs. Take Michael Tanner, writing for the Cato Institute, who suggests that “We should understand that for most low skilled workers, such as the hypothetical mother in our welfare study, a minimum wage job is a starting point, not a destination.” Tanner’s notion that low-wage jobs are merely entry points that should be tolerated until workers choose to get a new job is expanded further by John Caile at Red State, who takes it to its logical conclusion: “If you aren’t earning enough to live on, it is YOUR responsibility to gain skills, learn a trade, or educate yourself in order to make YOURSELF valuable enough to a potential employer that they are willing to pay you more. No one owes you a job. And no one owes you any particular wage.”

Put simply, the conservative position on the minimum wage is that if a person desires to make more money than their current job pays, they should aim to seek new employment, either in a different position with the same firm, or with some other firm that happens to offer them more money. It should never be incumbent on the state to ensure that people making very little money should be able to support themselves in their current position of employment – indeed, this is the reason Republicans like Paul Ryan and Marco Rubio still resist tinkering with the minimum wage to make low-wage jobs more livable.

Why, then, is the expectation that people who wish to maintain their current employment but at livable wages should simply give up their jobs and seek new ones, while those who wish to maintain their current employment but not have to interact with gay customers should receive state insurance that this possibility will be an option for them? It would seem that both circumstances – too-low wages and burdens on the conscience – militate equally against human flourishing, one by imposing the privations of poverty, and the other by potentially harming religious practice. Yet for conservatives, only one of these warrants state intervention; the other should be sorted out privately, by individual effort.

There are a number of reasons people work in the jobs that they do. For some, especially the poor, location, hours and skills are usually all relevant guideposts that lead people to occupying particular jobs. It isn’t feasible, for example, for a young mother with little job training to choose a slightly higher-paying job an hour outside her city when she needs to use public transportation to get to work and have time to pick her child up from daycare. Similarly, it’s likely not reasonable to expect a third-generation baker to close down her store and begin a new profession rather than comport with a legal system that expects her to transact with gays. In both cases, one can imagine a person’s work as being heavily contextualized in the total narrative of their life, and can see immediate problems with treating work as though it’s instantly and easily isolatable and mutable from the broader circumstances a person lives within.

But this view – that the work people do is part of their general life narrative, and should be treated as such – would seem to dictate some state protection for participation in that work, so that people can enjoy stability, self-sufficiency, and some measure of flourishing. Yet the conservative view, at least when it comes to the minimum wage, seems to dictate the opposite: that work is basically separate from the remainder of a person’s life context, and should be viewed as always easily switched in and out of to suit their interests.

If work is to be viewed as a valuable component in the whole story of people’s lives, then the valuation of labor can’t stop at those the right wing views as morally defensible – that is, pious bakers and photographers. Instead, this vision of work should extend to everyone who lives and labors, which means the idea that work should lead to some kind of flourishing should be taken seriously when it comes to workers’ demand for a livable wage.

Update, 3/12/14: This post initially suggested that Kansas’ “Religious Freedom Act" was "poised to become law " However, Kansas Republicans indicated in late February that this bill would not be pursued.