A 7-year-old wins a fight for unapproved drugs 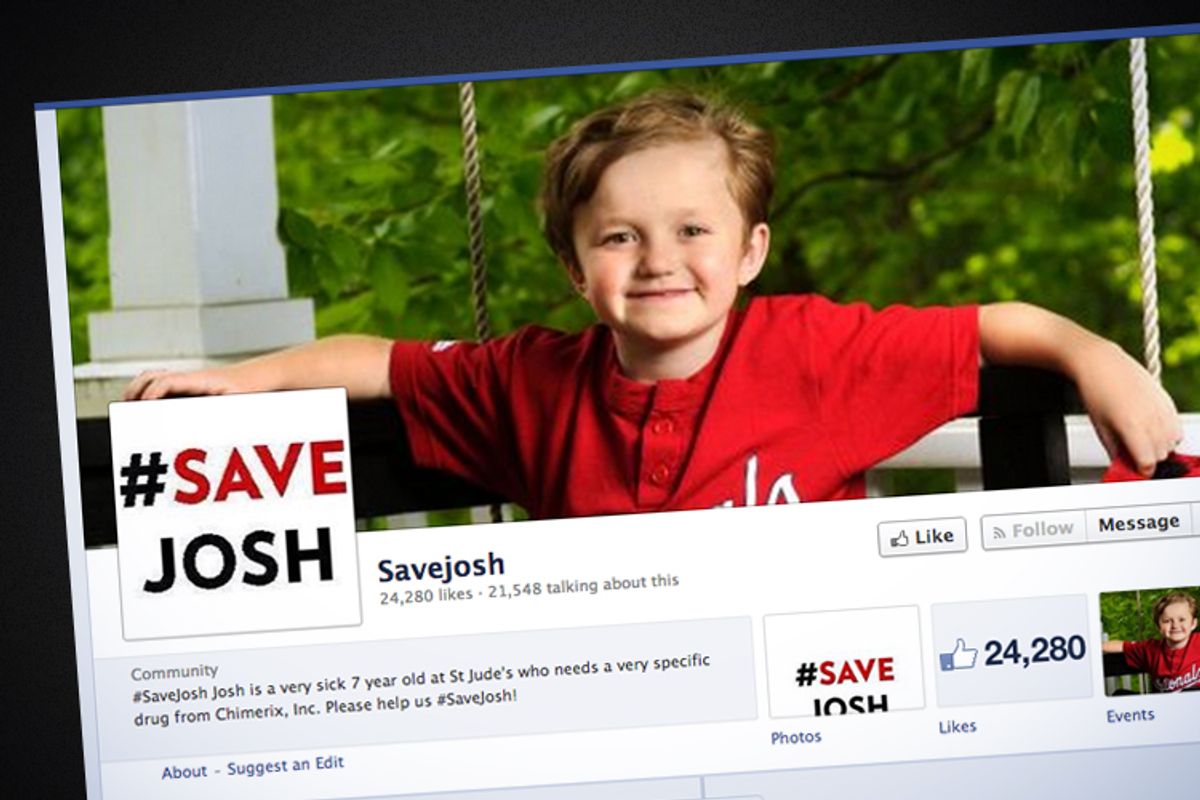 It's a story that has all the elements of a classic good guys vs. bad guys narrative, one that recently got, if not a happy ending, a hopeful new chapter. On Tuesday, the Chimerix pharmaceutical company announced that 7-year-old cancer patient Josh Hardy will become the first patient in a new drug trial to start Wednesday. Hardy's family had previously been turned down in their quest to get the boy on a course of Brincidofovir, a promising new antiviral drug that is not yet fully FDA approved. His mother, Aimee, told Fox Wednesday that the family is now "just tremendously excited."

Chimerix's decision represents a very swift about-face. Just earlier Tuesday, CNN was reporting how the "Company denies drug to dying child." Hardy, who received his first cancer diagnosis at just 9 months, is currently in intensive care with an adenovirus that is wreaking havoc with his frail immune system. Company president Kenneth Moch told CNN he would feel "horrible and heartbroken" if the boy were to take a turn for the worse, but that there was "no way" Chimerix would reverse its position. The company, which aims to get the drug on the market in 2016, argued that accepting compassionate use cases like Hardy's would hinder its efforts to get it out to the public sooner. But in light of a vocal Facebook, Twitter and a Change.org petition, "Josh's army" has prevailed.

In a battle between a very sick 7-year-old child and a drug company, the side to stand on is pretty clear. Giving patients who for various reasons are unenrolled or unqualified for clinician trials but are willing to take their chances on unapproved drugs can be the last best hope for many of them. The FDA approved 974 such waivers last year -- and as GlobeNewswire explained Tuesday, it had to work closely with Chimerix to "expeditiously" greenlight Hardy's access.

Believe me, I want that kid to get all the promising drugs he can and I want those drugs to work like crazy. I want every single person facing horrible odds and terrifying diseases to have the opportunity to grab on to something that works, and works right now. Because when you're in the throes of very serious illness, you can't sit around and wait for FDA approval. You literally don't have the time. I know; I've been there.

In 2011, I entered a Phase I clinical trial after being diagnosed with metastatic, Stage 4 melanoma. The average survival time for a patient with my diagnosis is a few months. My drug combination, though successful and proceeding apace through the trial process, is still not FDA approved. I can do the math. Without that early access to treatment, I'd likely be dead now. Last fall, when melanoma patient and Denver father of three Nick Auden mounted a campaign to gain compassionate access to the type of drug combination I've had, both Merck and Bristol-Myers Squibb turned him down. He died in November. This week, Merck announced it is now expanding its patient access for its version.

Yet all of my hopes for Josh Hardy, all my intimate experience with the power of experimental drugs, haven't just given me the desire to get these breakthrough therapies to more people, right now, before time's out. They've also shown me firsthand how risky these gambles can be, and the agonizing choices that doctors and researchers are often forced to make. Auden was disqualified from a drug trial because of an early medical complication. Hardy has been given an intravenous form of Brincidofovir, which "ravaged" his kidneys.  Now remember that unapproved drugs carry risks of severe and unforeseen reactions. More heartbreakingly, they carry the risk of simply not working. My own miracle was successful on less than one-third of the patients in the trial.

Though Jared Leto and Matthew McConaughey won Oscars for "The Dallas Buyers Club" – a movie about one man's clever, lifesaving circumvention of the FDA and the pharmaceutical industry – when I watched it several weeks ago I was mesmerized by Jennifer Garner and Denis O'Hare as the doctors caught in the midst of the battle. In one memorable scene, O'Hare vents his frustration over all the hospital trial patients who have gone off the grid, lamenting that without the data that those patients represent, the drugs they're working on won't get approval. This is the quandary that doctors still face, with every trial. They want their drugs to work and they want them to get out there, and the sad truth is that "quickly" and "safely" are often conflicting goals. They need the data to move forward, and that means making really tough choices about access. And the current crop of "right to try" bills carries with it its own set of pros and cons – it's great if the Phase 2 or 3 trial drugs you're trying to access work; not so great if you're spending money on an unconventional course of treatment that some hospice groups warn "raises false hopes."

I want this to be a story with a happy ending. I want Josh Hardy outside playing and not languishing in a hospital bed. But I hope that the conversation about drug trials and compassionate access can be more than sound bites and heroes and villains, because we all have a stake in how these stories play out. I hope we remember that behind every drug that works, every one that gets approval, there's a string of trial and error that stretches back for years, dotted with human lives.