5 shocking reasons why Americans are getting fatter

It's not just the fast food... 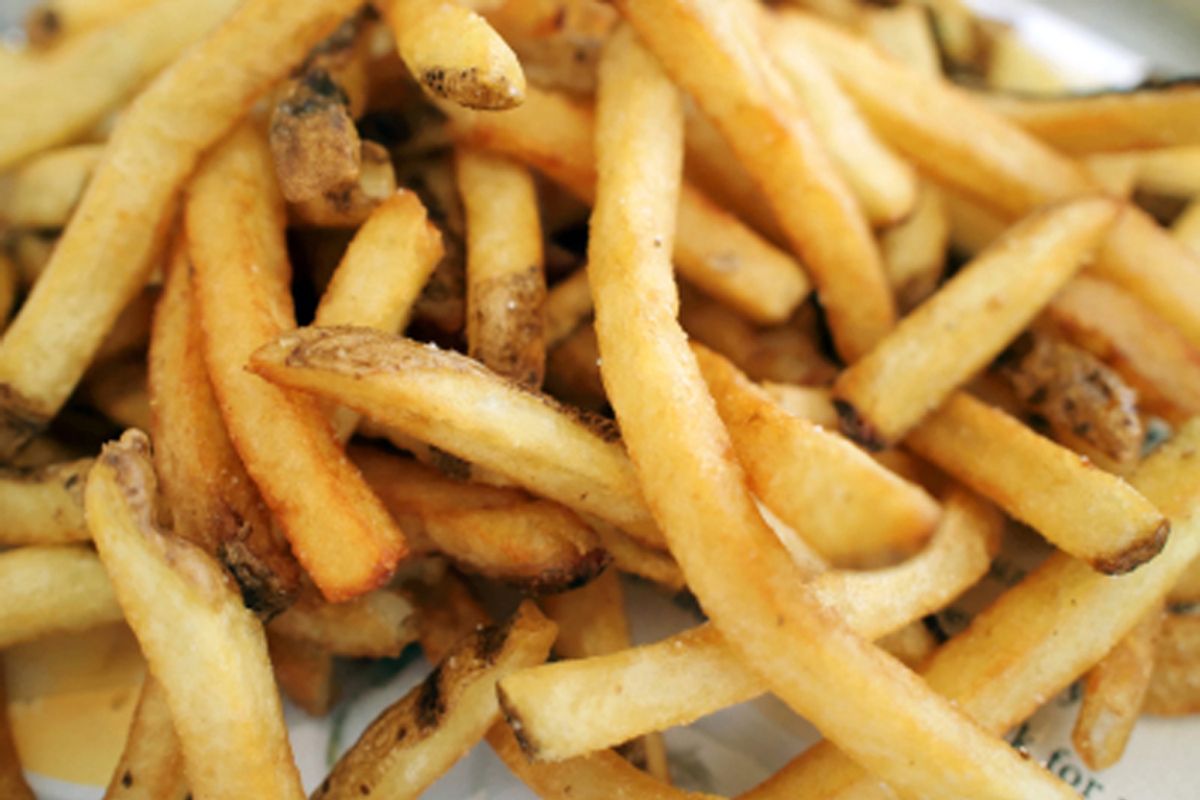 Americans have become huge. Between the 1960s and the 2000s, Americans grew, on the average, an inch taller and 24 pounds heavier. The average American man today weights 194 pounds and the average woman 165 pounds. The growing girth has led to the creation of special-sized ambulances, operating tables and coffins as well as bigger seats on planes and trains. Almost a third of American children and teens are overweight, but 84 percent of parents believe their children are at a healthy weight in one study. Why? The adults are probably overweight too.

Still there are scientific reasons why Americans are blimping up and they aren’t limited to eating too much and exercising too little. Here are a few areas under suspicion.

1. Antibiotics in food and as medicine. A recent article in the New York Times confirms suspicions that the antibiotics routinely given to livestock to make them fat do the same thing to people. Antibiotics are thought to fatten by changing gut bacteria to make absorption of nutrients more efficient. In 1974, an experiment was done on several hundred Navy recruits to see if they would gain weight on antibiotics and, after only seven weeks, they did. An experiment was also done, unethically it sounds, on "mentally deficient spastic" children in Guatemala in the 1950s, reports the Times. The children gained an extra five pounds over a year compared with children who were not given antibiotics. Denmark researchers found babies given antibiotics within six months of birth were more likely to be overweight by age seven.

Most researchers blame over-prescription of antibiotics for excessive human exposure; US children get as many as 20 antibiotic treatments while they are growing up, says Martin Blaser, a leading antibiotic researcher at New York University Langone Medical Center. But studies show there are antibiotic residues in US food too, especially in meat and milk, and the government tests for them. That means even if you avoid unnecessary antibiotics from the doctor, you could be getting them from the grocery store.

2. Other livestock fatteners. If antibiotics used to make livestock fat could make us fat, is there any reason to think other weight-producing drugs for livestock wouldn't do the same?Ractopamine, marketed as Paylean for pigs, Optaflexx for cattle and Topmax for turkeys is widely used in the US and banned in many other countries. It is given to 60 to 80 percent of US pigs, 30 percent of ration-fed cattle and an undisclosed number of turkeys. There is no withdrawal period for ractopamine before slaughter but Big Ag says the drug is not in the meat because it exits the animal as manure. Okay, but what happens to the manure?

Also banned in European countries are the hormones US cattle growers rely upon, such as oestradiol-17, trenbolone acetate, zeranol and melengestrol. Zeranol may have more actions than just making mammals fat. It is a "powerful estrogenic chemical, as demonstrated by its ability to stimulate growth and proliferation of human breast tumor cells in vitro at potencies similar to those of the natural hormone estradiol and the known carcinogen diethylstilbestrol," says the Breast Cancer Fund. Translation: it may be linked to US breast cancer rates, too. No wonder Europe doesn't want our beef.

3. Pesticides and other endocrine disrupters. Some antibiotics and artificial sweeteners are similar molecules to endocrine disrupters—the chemicals used to make fire retardants and plastics that are increasingly in our food and environment. Endocrine disrupters, like BPA (Bisphenol A), banned in some baby bottles, and Triclosan found in Colgate's Total and many dish detergents, are linked to a host of shocking symptoms like genital deformities in wildlife and infertility, low sperm counts and possible early puberty and diabetes in humans. But they also may be linked to obesity.

s early as 2003, the journal Toxicological Sciences addressed effects that endocrine disruptors have on fetal development that likely play a role in adult obesity. "Obesity has been proposed to be yet another adverse health effect of exposure to endocrine disrupting chemicals (EDCs) during critical stages of development," echoes an article in the International Journal of Andrology. Pregnant women with high levels of the endocrine disrupter PFOA (perfluorooctanoic acid used in the manufacture of as Teflon and Gore-Tex) in their bodies were three times as likely to have daughters who grew up to be overweight, reported the New York Times' Nicholas Kristof.

4. Sugar substitutes. Artificial sweeteners have always been billed as a way to cut calories and lose weight. But recent research shows they may do just the opposite. When researchers at the University of Texas Health Science Center studied 474 people who drank two or more artificially sweetened soft drinks a day they found the people gained five times as much as those not drinking diet drinks. Thanks for nothing!

There are three reasons artificial sweeteners may do more harm than good. One is that some of the sweeteners—which tend to be chemicals like acesulfame potassium and aspartame—may slow metabolism, speculate researchers. Secondly, artificial sweeteners separate "food seeking behavior" from the "reward" of real nutrients and can set up sweets addictions because the reward is never received. They literally "train" people to crave sweets. Finally the presence of artificial sweeteners in a product doesn't automatically mean natural sweeteners aren’t present too. Some food manufacturers use both. Read the label. Marion Nestle, a professor in nutrition, food studies and public health at New York University and leading food expert, told me she isn’t aware of any convincing evidence that proves artificial sweeteners help people to lose weight. One artificial sweetener, Splenda, has similarities to endocrine disrupting pesticides....

5. Industry and government marketing. Most people are aware of aggressive junk food marketing, especially to children, and everyone from Disneyland to First Lady Michelle Obama has spoken out about it. In a study in the journal Pediatrics, children who tasted identical graham crackers and gummy fruit snacks, some with and some without cartoon characters, "significantly preferred the taste of foods that had popular cartoon characters on the packaging." Who says advertising doesn't work?

Researchers who studied 500,000 California middle- and high-school students found those who attended schools located near fast-food outlets—surprise!—weighed more. Still, it is not just the food industry that is responsible for our growing national girth.

The USDA, even though it cautions food consumers about high-fat, obesity-linked foods, plays the other side of the street as well and is linked to a group that seeks to get people to double their cheese intake to help milk sales. Dairy Management, a USDA "marketing creation" with 162 employees, according to the New York Times, has helped Pizza Hut, Taco Bell, Burger King, Wendy's and Domino’s cheesify their menu options!

"If every pizza included one more ounce of cheese, we would sell an additional 250 million pounds of cheese annually,” rhapsodized the Dairy Management chief executive in a trade publication. Though Dairy Management is mostly funded by farmers, it received $5.3 million from the USDA during one year, for an overseas dairy campaign, which almost equals the total $6.5 million budget of USDA's Center for Nutrition Policy and Promotion—the group that cautions us about fatty foods like cheese. Yes, the government is talking out of both sides of its mouth when it tells the public what to put in its mouth.