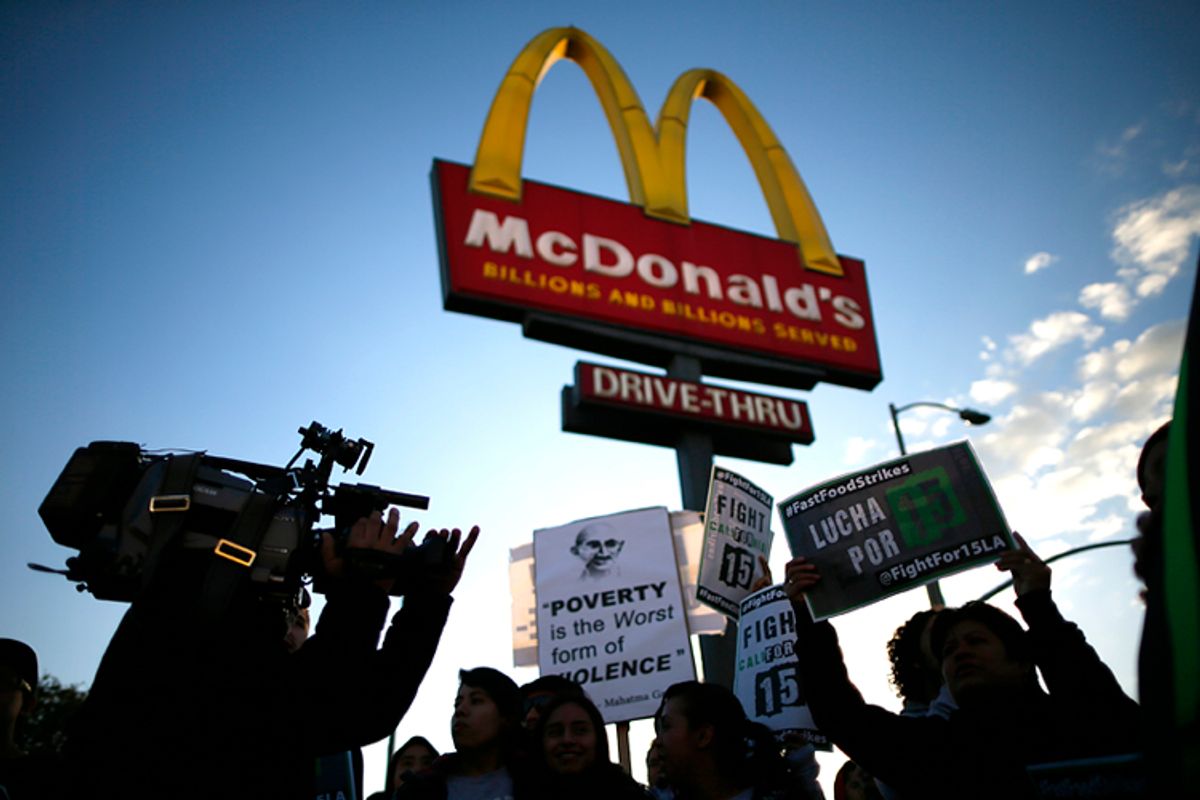 McDonald's workers in three states are suing the corporation and its franchisees over alleged wage theft, opening a new front in the embattled U.S. labor movement’s effort to transform a mammoth industry.

"I knew I wouldn’t be making a lot of money, but I thought a well-known company like McDonald's would treat me fairly -- at the very least follow the law," plaintiff Jason Hughes told reporters on a midday call announcing the suits. "We brought this lawsuit because neither has happened." Workers allege forms of “wage theft” – failure to pay legally required compensation – including under-compensated overtime in California; uncompensated time cleaning uniforms in New York; and being required to show up, but not allowed to clock in, when business is slow in Michigan. McDonald's did not immediately respond to a request for comment.

As I’ve reported, organizers behind the past year’s fast food strike wave – activism primarily funded and directed by the Service Employees International Union – have previously sought to highlight the industry’s alleged rampant wage theft problem, including by releasing a survey in which 84 percent of 500 New York City fast food workers said they’d experienced at least one form of wage theft (like off-the-clock work, missed breaks or unreimbursed delivery expenses) in the prior year. The same day last May that the report was released, New York Attorney General Eric Schneiderman announced the issuance of subpoenas to a fast food corporation, and the investigation of several fast food franchisees. (When asked about strikes, McDonald's has said both the corporation and its franchisees are "committed to providing our employees with opportunities to succeed.")

The most significant threat posed by the potential class actions – one apparent arm in a campaign of media, consumer, political, economic and workplace pressure on fast food giants – may be its potential to draw scrutiny and force disclosures about the relationship between the giant McDonald’s corporation, which netted over $5 billion in profit last year, and its smaller individual franchisees, which are the legal employers of most McDonald’s workers. "In the past, McDonald's has tried to shield itself from liability," said Joseph Sellers, one of the attorneys bringing suit. But "we found evidence that McDonald's has indeed exerted control over the daily operations" of the franchised stores that "makes it legally jointly responsible" for the alleged crimes.

In California, workers are alleging wage theft at directly corporate-owned McDonald’s stores as well as at franchisee locations. As I’ve reported, a California judge has found sufficient evidence to make Wal-Mart a co-defendant in a lawsuit, Carrillo v. Schneider, over alleged wage theft in one of the retail giant’s subcontracted warehouse hubs.