How big oil destroys the world: A real-life saga of greed 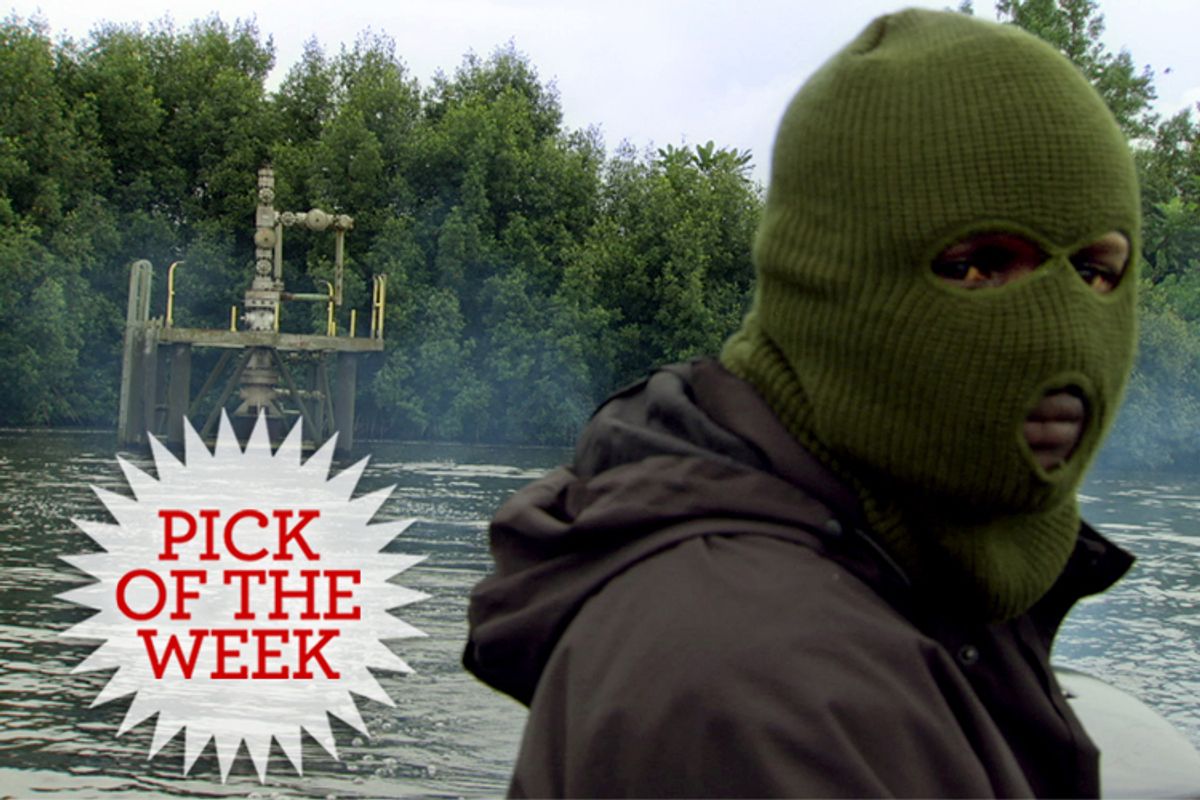 If you want to know how the world works, as opposed to how we are told it works – or how we wish it might work – you need to see “Big Men,” a remarkable new investigative documentary about oil, money, Africa and America that comes with Brad Pitt’s name attached as executive producer but was directed by Rachel Boynton. If Boynton is not yet as well known as Laura Poitras, the fearless documentarian closely associated with Glenn Greenwald and Edward Snowden, she belongs in the same company as one of the world’s most intrepid filmmakers. In “Big Men,” she gains access to the corporate boardroom of the private equity firm Warburg Pincus, where guys in suits sit around discussing a $2 billion oil deal, and to the camps of armed militants in the Niger Delta, where guys with Kalashnikovs, wearing ski masks and castoff NBA T-shirts, vow attacks against the corrupt Nigerian government.

Boynton’s previous movie, “Our Brand Is Crisis,” explored how a little-noticed presidential election in Bolivia became a chance for American campaign consultants, including James Carville, to road-test their tactics and messages (on behalf of a pro-American, pro-capitalist “centrist” candidate, to be sure). George Clooney is now developing a fictional version of that story, reportedly to star himself and Sandra Bullock, and “Big Men” may have similar potential. Although I suspect I know where Boynton’s political opinions lie, she’s a rigorous straight shooter who isn’t naive about the inner workings of the capitalist world order and does not seek to demonize anyone. It might be fair to describe “Big Men” as a tragic fable about how an event that should have made things better for many people – the discovery of an immense underwater oil field 35 miles off the coast of Ghana – wound up doing no one any good. But it’s more like a Russian novel than a straightforward morality play, and the question of who the heroes and villains of the story may be is left up to you.

Indeed, Boynton always seeks to return the story to a human scale, even when it’s a story of skulduggery, corruption and international finance (three interchangeable terms, one might say), a story that leaps around, soap-opera style, from New York to Dallas to the Niger Delta to the Ghanaian capital, Accra. For instance, it would have been easy for a certain kind of left-wing muckraker to render Jim Musselman, the CEO of a small oil company called Kosmos Energy (does that sound like a CIA front group or what?), as an inherently bad person: He’s a bald, rich, white guy from Texas who stands to become a whole lot richer after Kosmos’ gamble on Ghanaian oil turns into a winning lottery ticket. When he shows up to greet a Ghanaian tribal chief bearing bottles of Scotch and Hennessey and a $10,000 donation for an educational charity (whether or not this is a bribe remains unclear), it’s pretty easy for the viewer to start edging toward contempt.

But Musselman comes off here as an essentially decent person, raised on a ranch where his parents and grandparents are buried, who genuinely believes that Kosmos’ huge offshore oil project will benefit Ghanaians as well as his investors. But of course Musselman’s personal qualities don’t matter; like everybody else in the story, he’s a prisoner of money. (Somewhere Karl Marx makes a similar point: Under capitalism, human beings are supposed to be the masters of capital, but in practice it’s the other way around.) Boynton opens her film with ruthless quotations from Milton Friedman and from John Huston’s “Treasure of the Sierra Madre,” and those are exactly the right touchstones, both for this story and for the larger sphere of international capital it represents. Greed is not exactly a new feature of human society, but in our current dispensation it has been elevated to the level of a theological virtue. With this much money on the table – Kosmos was at one point valued as a $5 billion company – it’s every man for himself, and the devil take the hindmost.

Musselman is really nothing more than a well-compensated employee of the nameless investors at Warburg Pincus and Blackstone who bankrolled Kosmos in the first place. As Warburg Pincus partner Jeffrey Harris explains in passionless terms, they are interested in only one thing: a sizable return on their high-risk investment, which was somewhere in the high hundreds of millions. Those faceless 1-percenters (more like 0.1-percenters, to be fair) are the real “big men” who stand behind all the others in the story. The phrase is self-explanatory Nigerian slang, often applied to politicians, clan leaders, businessmen and criminals alike. If Musselman dreams of being a big man, so does a charismatic Ghanaian businessman named George Owusu, who sold Kosmos the oil rights he held after cold-calling everyone named Musselman who lived in Dallas. (In this tale of betrayals, switchbacks and double-crosses, it’s a phone call they will both live to regret.)

As for the nested levels of officialdom who have reportedly siphoned $400 billion-plus in corruption out of the oil economy in Nigeria (Ghana’s next-door neighbor) since the 1960s, they’re big men too, who have enriched themselves and their cronies while driving the country’s overall standard of living down even as it has become a major petroleum exporter. As for those guys in the ski masks along the Niger River, who call themselves the Deadly Underdogs – are they really political rebels with an agenda of economic justice, or just wannabe big men? One tells Boynton that he wanted to help her make her film because he dreams of becoming famous on television, which is somewhat unlikely given that we can’t see his face. One reason “insurgents” blow up the Nigerian oil pipelines, it turns out, is because they’ve been promised payoffs by local contractors from the ensuing cleanup.

But “Big Men” is more than a roundelay of hopelessness or cynicism, since Boynton makes clear that there are activists in both Ghana and Nigeria who are struggling against the cycle of corruption and greed. Corruption in Africa is often described in the West as if it were an endemic condition, rather than one that has been deliberately induced. Imperialism in the 19th-century sense no longer exists, but the neo-imperialism of the current age rests upon oil companies and other outside corporate interests who have found that breeding and nurturing a corrupt and semi-Westernized local elite is the easiest way to do business in the developing world. As one Ghanaian activist tells Boynton, any attempt by Africans to resist this system leads to ideological pushback. When a newly elected Ghanaian government decided to exercise its right to take a second look at the Kosmos contract in light of the oil field’s massive value, the Wall Street Journal described its decision as “local thuggery.”

It didn’t have to be this way, and still doesn’t. Yes, I’m aware that the era of African nationalism and African socialism in the 1970s had grave problems, some of which stemmed from its status as a zone of proxy war between the United States and the Soviet Union. But almost everything about this situation was accurately predicted, years ago, by Frantz Fanon, Patrice Lumumba and others: Any time people in the developing world allow their natural resources to be exploited according to rules of the “free market,” rules written by Western corporations and/or Western governing elites for their own benefit, they will come away worse than they were before. Is there an exception to this to be found anywhere in the world? Fanon would have said that eventually “the wretched of the earth” will wake up and learn their lesson. If this vivid, compassionate but unstinting film is any indication, Rachel Boynton is not convinced.

"Big Men" is now playing at the IFC Center in New York. It opens March 21 in Dallas, March 22 in Albuquerque, N.M., March 28 in Los Angeles and Washington and April 18 in Chicago, with more cities and home video to follow.