Paul Ryan's worthless attempt to save face: Why he's still an overrated fraud

From Ayn Rand to Charles Murray, he thinks the rich deserve their wealth and the poor are to blame for their misery 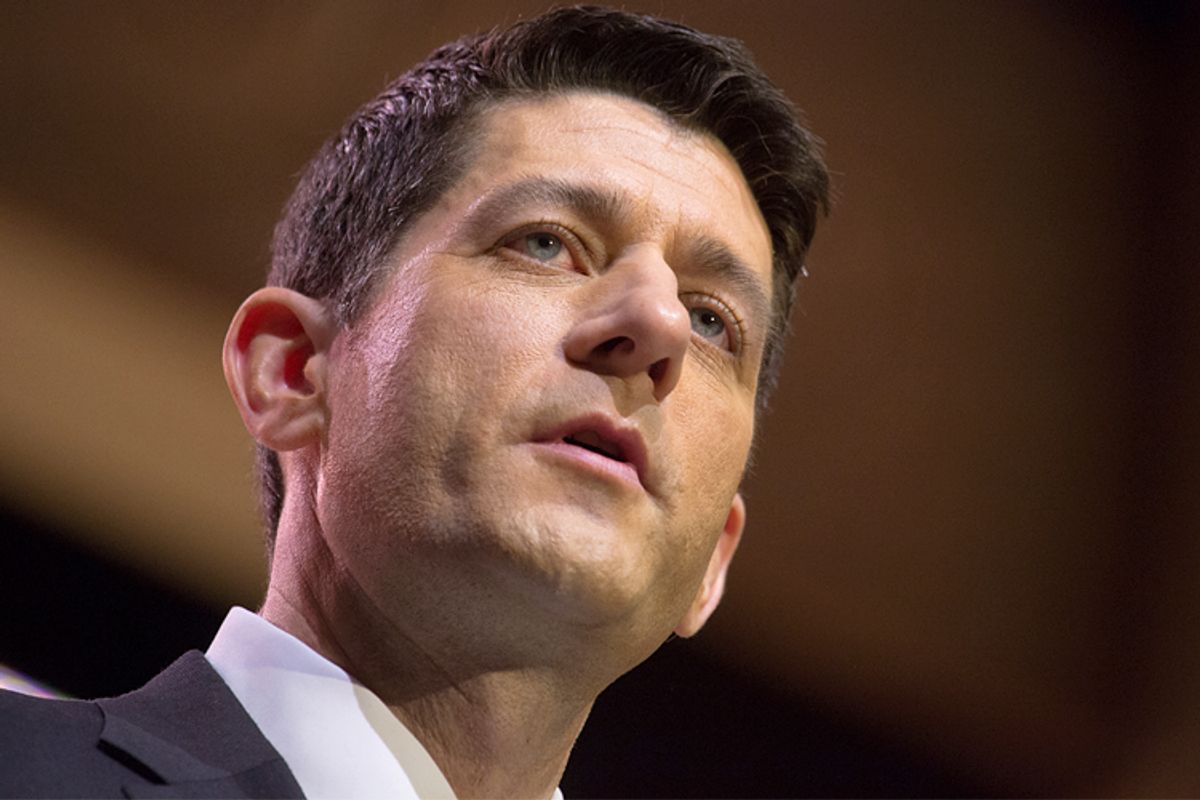 Beltway writers have recently tried to outdo themselves with breathless profiles of a “new” Paul Ryan, deeply concerned about the poor. I’ve warned repeatedly that Ryan’s views on poverty are just warmed-over Reaganism, and now we have proof. McKay Coppins’ piece “Paul Ryan Finds God” should have revealed that his God is no longer Ayn Rand but Charles Murray, the man who put a patina of (flawed) social science on Reagan’s lyrical lie, “We fought a war on poverty, and poverty won."

But let me explain all of what it means to cite Charles Murray in 2014. Murray is so toxic that Ryan’s shout-out must be unpacked. First, Rep. Barbara Lee is absolutely right: Ryan’s comments about “inner city” men who are “not even thinking about working or learning the value and the culture of work” are, in fact, “a thinly veiled racial attack,” in the congresswoman’s words. “Let’s be clear, when Mr. Ryan says ‘inner city,’ when he says, ‘culture,’ these are simply code words for what he really means: ‘black.’”

A tip for Ryan: If the racial subtext of your remarks “never even occurred to me,” as you cite a writer who has been repeatedly charged with racism, who is categorized as a “white nationalist” by the Southern Poverty Law Center (I'm not sure I'd go that far), well, that in itself is a problem. As Murray himself told the New York Times about his landmark book “Losing Ground:” "A huge number of well-meaning whites fear that they are closet racists, and this book tells them they are not. It's going to make them feel better about things they already think but do not know how to say.” Apparently Ryan is one of them, if we give him the benefit of the doubt and call him “well-meaning.”

But Murray proves you can embrace noxious racial stereotypes about African-Americans, and also hold contempt for a lot of white men, and women. He demonstrated that in his last book, “Coming Apart: The State of White America, 1960-2010.” Murray argues that white people have developed the same character problems that claimed African-Americans 50 years ago, which he outlined in "Losing Ground": They prefer shacking up to marriage, they don’t go to church, they’re lazy and dishonest and enjoy the government dole. After all, the same percent of white children are now born to single mothers – just over 25 percent -- as were black children back when Daniel Patrick Moynihan issued his alarms about “the Negro family.” And the reasons are largely the same: promiscuity, laziness, women who insist on equality – and lower IQ.

“Coming Apart” relies on the same ugly genetic fatalism and bogus notions of genetic differences Murray’s been peddling for years – this time among upper- and lower-income whites. In his awful book “The Bell Curve,” he relied on explicitly racist (and mostly discredited) scientists to argue that blacks and Latinos lagged behind whites and Asians in wealth and income because they had lower IQs, and the basis wasn’t centuries of oppression and deprivation but genetics. This time around Murray told his reviewers he was going to dodge the racial trap, and talk about white people. And again, he finds an IQ gap between the “cognitive elite” and lower-class whites that he says helps explain our winner-take-all society.

The other deeply offensive argument Murray makes in “Coming Apart” is that feminism helps explain the decline of work among lazy lower-class men. He approvingly cites Reagan-era anti-feminist George Gilder, author of the insane “Sexual Suicide,” who blamed women’s equality for letting women give up the job of civilizing men. “Gilder saw disaster looming as women stopped performing this function, a position derided as the worst kind of patriarchal sexism,” Murray noted. “But put in less vivid language, the argument is neither implausible nor inflammatory: The responsibilities of marriage induce young men to settle down, focus and get to work … George Gilder was mostly right.”

And again, the proof of Murray’s sexist theorizing turns out to be bogus geneticism:

There are genetic reasons, rooted in the mechanisms of human evolution, why little boys who grow up in neighborhoods without married fathers tend to reach adolescence not socialized to the norms of behavior that they will need to stay out of prison and hold jobs….[Liberals] will have to acknowledge that the traditional family plays a special, indispensable role in human flourishing and that social policy must be based on that truth.

All of that helps explain why Ryan thinks he can get away with insisting, “This has nothing to do with race whatsoever.” Rick Santorum pulled the same trick when he claimed he didn’t say “I don’t want to make black people’s lives better by giving them other people’s money.” (It gets funnier every year that we were supposed to believe he said “blah people.”) Santorum, too, quoted Charles Murray and “Coming Apart” on the campaign trail, and even said explicitly that white people were coming to share the same “dependency” on government that had ruined African-Americans.

But it’s worth noting that even with all the evidence that Murray is now stigmatizing a lot of white people, Paul Ryan is still using dog-whistle racist language like “inner city” to share his concern about poor people lacking “a culture of work” In denying any racism behind his remarks, he actually didn’t use the best evidence he could have mustered. He didn’t have the courage to say, "Hey, my boy Charles Murray thinks lower-income white people are lazy and shiftless, too!" But that would require insulting much of the GOP base. Ryan’s too ambitious for that.

I once foolishly believed Murray’s equal-opportunity contempt for the poor and working class might wake up those struggling white folks that he and his Republican admirers disrespect. That didn’t happen, because outside of the rarefied confines of right-wing think tanks and the occasional Rick Santorum speech, they don’t talk about white people that way. The folks Murray – and Ryan – hold in contempt went big for Romney-Ryan in 2012.

But there’s one final reason that Paul Ryan's hailing a “culture of work” and stigmatizing government assistance is particularly offensive. This is the same Paul Ryan whose family’s construction firm fattened itself on government contracts; who received Social Security survivor benefits after his father died and used that public money to put himself through college; who then went on the government payroll and has never done anything other than attack poor people while on the government’s dime; who makes $174,000 a year in taxpayer dollars while keeping himself camera-ready with his PDX90 routine (Paul Ryan shirtless is still one of the top prompts on Google); who enjoys $350 bottles of wine thanks to lobbyists; and then dumps on the lazy, immoral inner-city poor with gambling addict and fellow government assistance recipient Bill Bennett.

This is the guy to whom the GOP is outsourcing its anti-poverty policy. Maybe he can hook the “inner city poor” up to the gravy train he’s ridden his entire life.