Governor again manages to avoid questions on the bridge scandal, but is tormented by local college students 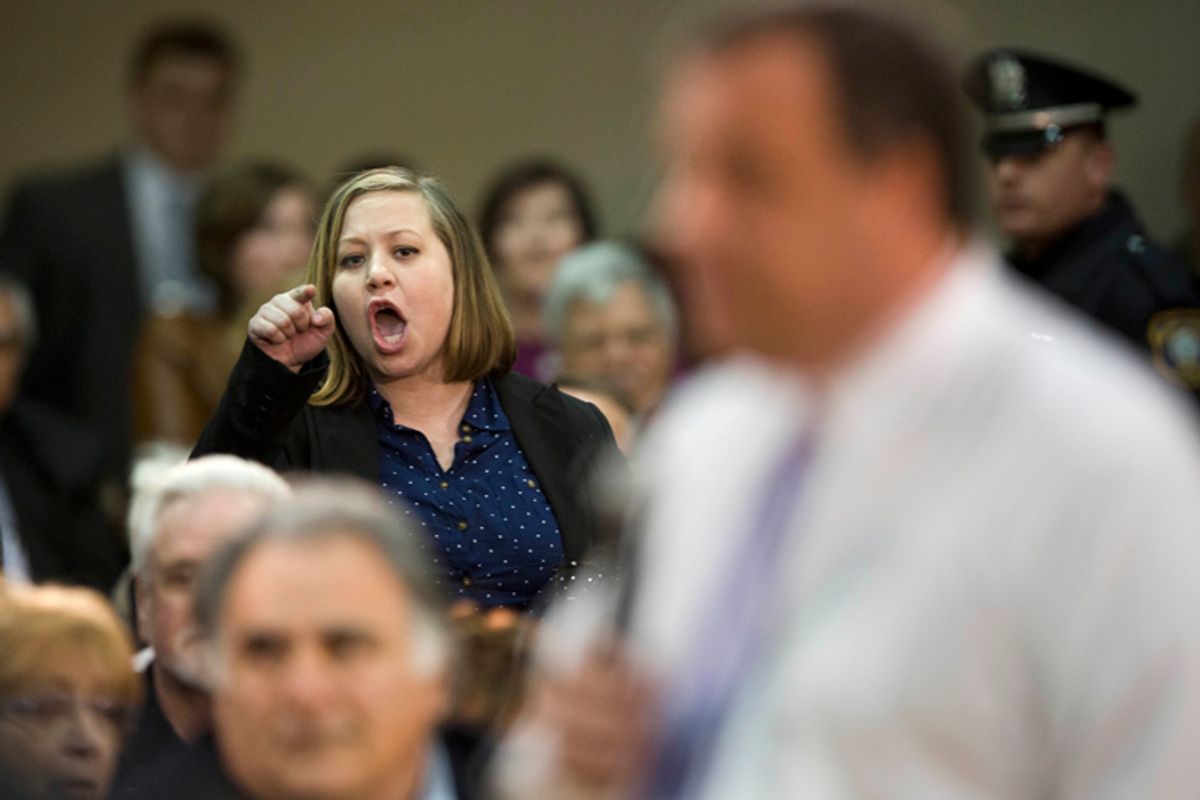 MOUNT LAUREL, N.J. -- In Gov. Chris Christie's fourth town hall since his termination of top aides tied to Bridgegate, the governor again managed to receive no questions on the scandal from the public, even as those same aides continue to invoke their Fifth Amendment rights. But Christie did receive the ire of several hecklers at the event.

Christie has consistently cited the lack of any questions coming from the general public at these town halls since his January press conference as evidence the scandal is only a media fixation and partisan ploy. Notably, each of these town halls has strategically been held in friendly areas.

And Thursday the governor attempted to use interruptions by college student hecklers from nearby Rowan University, who yelled phrases like "Christie hires crooks and liars," to bond with the several hundred local residents.

As each one of the several students affiliated with the New Jersey Working Families Alliance was escorted out by police, the crowd showed disdain for the protesters and applauded their ejection from the YMCA facility in Burlington County.

Last year, Christie garnered more than 62 percent of the vote in this county that President Obama carried with just under 60 percent a year earlier.

"I really love youthful enthusiasm, I really do," quipped the energized Christie after the fourth orchestrated interruption. "These folks who come in here today ginned up for their own partisan purposes -- they are getting exactly what they want," Christie said. "They get taken out. They get attention and the press follows them out and then interviews them."

The questions Christie did get ranged from concerns over the closure of a charter school to what the state had committed to do to fight Alzheimer's. Christie also used the forum to continue his push to shift the state's emphasis on fighting illegal drug use to treatment, away from incarceration.

"It costs $49,000 to house somebody in prison," as compared to $24,000 for in-patient treatment for drug addiction, noted Christie.

There were several anti-Christie pickets outside who held up posters that were critical of the governor's response to the state's continued foreclosure crisis. Inside, a handful of environmental activists silently held up anti-fracking signs to protest the governor's vetoing of a bill to ban the importation of fracking waste from neighboring Pennsylvania, which has embraced the controversial gas extraction process.

Christie's continued ability to elicit intense passions, both for him and against him, was very much on display in Mount Laurel.

Skip Brockner, a Vietnam War veteran, who is now retired, bills himself as an NRA member "who is an opinionated son of a bitch." Brockner says he "fell in love with Chris" when, in the run-up to a hurricane, Christie told thrill seekers "to get the hell off the beach."

As for the Rowan protesters, Brockner wanted to take a firmer hand than the police. "I got tired of hearing their weanie whiney asses. As a matter of fact, I asked a couple of cops if I could go over there and slap them."

Despite the relatively warm reception Christie got, there were a number of audience members who went away without asking questions they thought were actually more pressing than Bridgegate.

Mike McNeil, who leads the New Jersey chapter of the NAACP, says he had hoped to bring to Christie's attention the state's affordable housing crisis, which he says Sandy has made only more severe.

"He needs to take a walk and see what the real problem is," says McNeil. "He may be hearing" that the homeless are "only a bunch of drug addicts ... That's not true. There are families out there, working people."

Next Tuesday Christie will hold his 114th town hall in South River in Middlesex County, badly hit by Sandy.

Meanwhile, the U.S. attorney for New Jersey, as well as the state Legislature, continue to investigate the circumstances surrounding lane closures last September by the George Washington Bridge that resulted in a four-day traffic nightmare for the Democratic mayor of Fort Lee.

Democrats have alleged the closures were linked to a Christie campaign effort to pressure Fort Lee Mayor Mark Sokolich to join almost 50 other elected Democrats who endorsed Gov. Christie for reelection. Christie has denied any role in Bridgegate or any effort at such political intimidation.

He has asked Randy Mastro, longtime top aide to former Mayor Rudolph Giuliani, a Christie ally, to conduct an internal probe of what happened, which Christie has committed to make public. No date has been announced for its release.