Would your obituary go viral?

A Delaware man gains fame in his final message 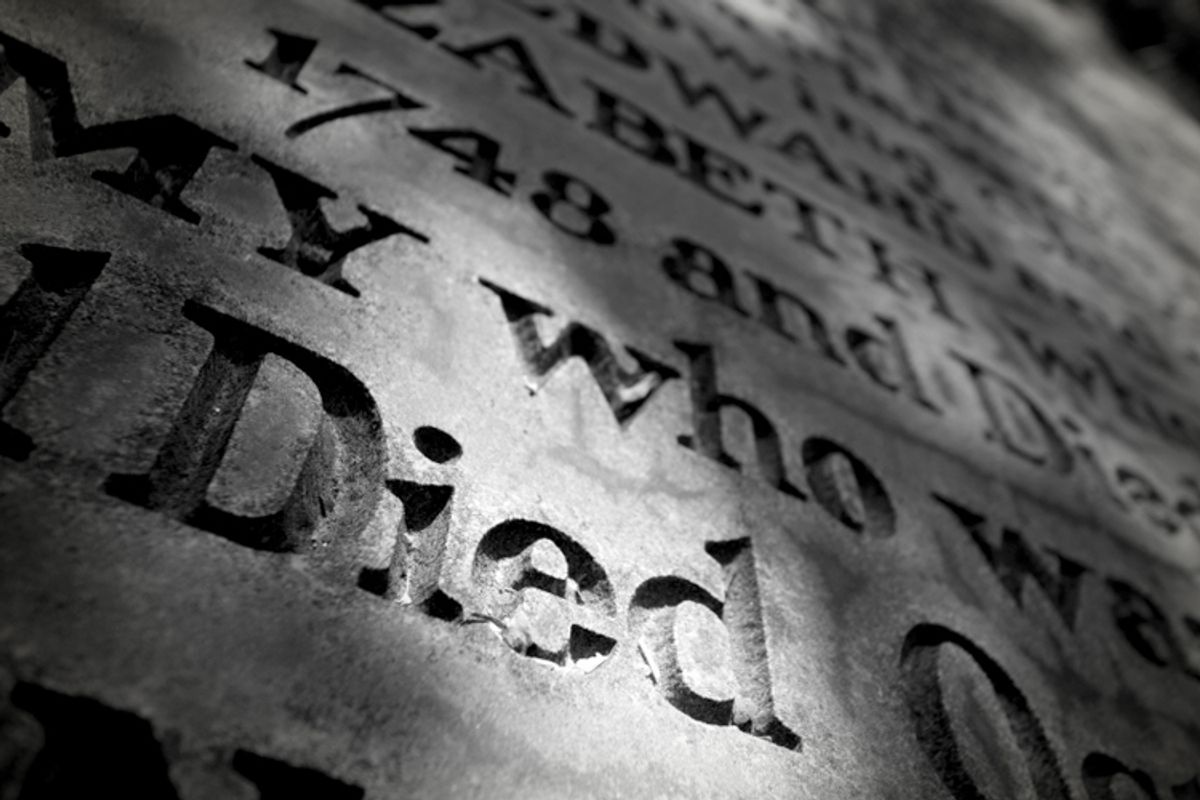 Of all the reasons to go viral, having it be for your obituary has got to be the least satisfying. In the spectrum of things to be famed for, I think most of us would even prefer it be for our Olive Garden review or grape-related pratfalls.

But Walter George Bruhl Jr. will not be remembered outside of his immediate circle of family and friends for his light saber technique or way with a blender. Instead, he has attained a little bit of immortality for his sassy self-penned obit, which his grandson Sam immediately posted on Reddit after he died Sunday. Take THAT, Selfies At Funerals, you've just been one-upped big-time.

Bruhl begins his epic obit by borrowing from Monty Python, describing himself, dead parrot-like, as "no more, he is bereft of life, he is deceased, he has wrung down the curtain and gone to join the choir invisible." He goes on to cheerfully describe a life in which he "drifted through the Philadelphia Public School System," a military stint he did "because of Hollywood propaganda" and an eventual career he was "downsized" from after "a fine anniversary dinner and a token gift."

It's funny, humble, slightly corny stuff – exactly how you'd wish your own grandfather would describe his life and eventual wish to be left "standing in the corner of the room with a glass of Jack Daniel's in his hand so that he would appear natural to visitors." And after Sam Bruhl posted it to Reddit, it soon cropped up everywhere else, as the "hilarious obit" became the golden-voiced panhandler of 2014.

As Mary Schmich noted recently in the Chicago Tribune, the viral obit has gained a surprising amount of traction recently. And what makes them interesting is that they're as varied as the lives of the people they chronicle. Three years ago, blogger Derek K. Miller had a friend send out one last prewritten message from his blog about his cancer experience. It began, "Here it is. I'm dead." In a quite different message, last September, the demise of Marianne Theresa Johnson-Reddick was marked with an obit that announced, "On behalf of her children who she so abrasively exposed to her evil and violent life, we celebrate her passing from this earth and hope she lives in the after-life reliving each gesture of violence, cruelty and shame that she delivered on her children."

There's something about the final word, the real and true final word to someone's life, that fascinates us. It seems to offer – though it doesn't really – a fleeting glimpse of other side of life. Derek Miller claimed, "I haven't gone to a better place, or a worse one. I haven't gone anyplace, because Derek doesn't exist anymore," though George Bruhl would have you know that he is "now exploring the universe." But the real allure of the viral obit is in the message of the writer him or herself, of the luxurious gift that so few people get – the chance to just simply say goodbye. Before she died last summer, Jane Lotter penned a heartfelt thank you to her friends and family and declared that "Knowing and loving each one of you was the success story of my life." Isn't that what we all hope the person we've loved and lost would say of us? Isn't that how we'd all want to look back on our own lives?

Though considerably less introspective than Lotter's, that same kind of warm, spirited joy for life is evident throughout Bruhl's obit as well. But what makes Mr. George Buhl's obituary truly stand out, even more than his cute old man references to his wife's longing for a mink coat, is his understanding that whatever there is after death, life here on earth and aboveground goes on. In his final words, he asks that "Instead of flowers, Walt would hope that you will do an unexpected and unsolicited act of kindness for some poor unfortunate soul in his name." It's one thing to leave behind one last laugh. It's another to challenge the people left laughing – and crying – to remember that all we have in the end is what we've given to others. All that matters is how generously we loved. It's a message worth going viral. So thank you for that, Walt -- wherever you are.