How drugs and "Saved by the Bell" saved my life

When my mom went missing, I had no idea what to do. But movies and music led me through, as they always have 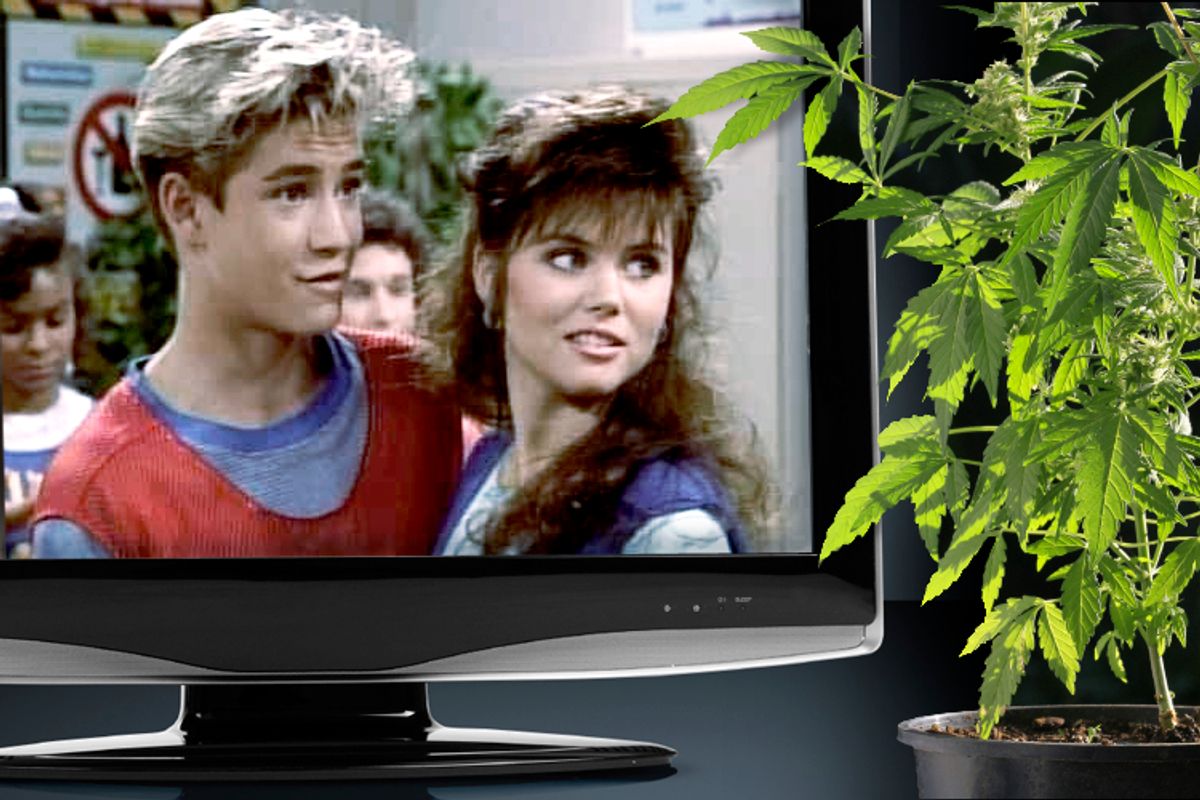 I was insanely stoned on a particularly potent strain of indica, and I think a few Valium, when I got the call that my mom was “missing.” This was a normal work night, a Monday I believe, and I wouldn’t have picked up the phone after 10 p.m., as a normal night consisted of taking a couple bowl hits and avoiding any late calls from friends. This, however, was a call from my mom and stepdad’s house in Illinois, past midnight their time, so I knew something was wrong. I figured my grandmother had died, so I steadied myself mentally and accepted the call. My stepdad was stuttering words, but at that moment I learned two facts: The first was that my mom had been missing since 1 p.m. Illinois time, when she left for an everyday bike ride. The other was instinctual but just as certain: She was dead.

I didn’t faint, or slide down a kitchen cabinet. I remember feeling hot, like I had a fever, but I didn’t “break down.” After I hung up the phone, I put my hand over my mouth and shut my eyes.

I’m not a working smoker, someone who can puff during the day or get creative and deal with extreme situations. I’m the kind of guy who takes a couple hits every night before bed, and watches TV. Handling something like this while stoned, however, was like being a staggering drunk in the eye of a tornado. I had no idea where to go. I went back to bed, and as I’ve done my whole life, whenever the wheel of Fortuna spins against my favor, put on “Bill Cosby: Himself,” and shut my eyes. TV, albums and movies are my other drug, and the trick I’ve learned is to put on something, usually a comedy special or movie that I know by heart, and enter that world as an audience, crew or band member. These are the support group to my breakups, mild setbacks, depression, broken dishes, dead pets or flat-out, fuck you moments of despair and misery. This is the story of two months in my life where I learned that: A) My mom committed suicide, B) I have the best friends and family in the world, and C) movies and music can save your life.

Shock is almost as good as opiates. I spent December 2013 in a constant state of lucid shock. The weird thing was, I wasn’t using. I’ve been a casual drinker since I had my first taste at 13. I always wanted marijuana to work properly (euphoria/positive world outlook), but dammit, even after years of use -- which began by sneaking onto my roof at 14, with a lava lamp and Miles Davis’ “Kind of Blue” providing background mood -- it still can go either way. Paranoia or mildly pleasant distraction. Hard drugs never entered the picture until I got my wisdom teeth out, at 16 or 17. It was just like my first drink. I had never met anyone I liked so much, so instantly, in my life. We got along swimmingly, and I remember taking three days off senior year high school to recover. My mom gave me a Vicodin, and once she left for work, I took three more and dragged a beach chair to the middle of the lawn, made myself a strong screwdriver, and finished Michael Chabon’s “Wonder Boys,” while listening to my recently acquired “The Big Bang! The Best of the MC5” CD on my Discman. I don’t think I’d ever been happier in my life. But I digress …

The next day after the call, there were still no clues and no updates, so I  called off work indefinitely. Not knowing what to do, I just walked. I walked the Silverlake Reservoir probably three times a day. I didn’t return dozens of phone calls. I kept thinking about my mom, on a sunny Monday afternoon bike ride, being abducted and hogtied in the back of a van. Or worse. Neither the police nor my stepdad had any information. She had simply disappeared. The weird thing is, I slept well. I fell asleep to Dave Chappelle and Chris Rock stand-up specials, and lived with Superchunk’s “I Hate Music,” an album about loss, constantly in my car. I simply didn’t know how to feel. On the third day, after the police had scoured the area thoroughly with bloodhounds and ATVs, they found my mom in an abandoned cemetery. She had shot herself in the head, left no note, or prior indication that this was a thought in her mind.

After a memorial in our hometown in Omaha that I was fucking dreading (I actually watched the movie “Elizabethtown” before leaving), I felt better, even though there were a million questions with no answers. My mom and I shared a birthday on Jan. 12, and feeling completely burned out, my friends turned up from different states, and we partied like Wolves of Wall Street. I have amazing friends and family, adjectives and descriptions that don’t convey the same meaning in print. The real problem hit when I got home. I was coming down from shock, cocaine and three days of straight drinking, which is a horrific combo. I couldn’t concentrate at work, I couldn’t zone out to “Full House” on Nick at Nite anymore. What started as about three Norcos, two Valium and two Xanax quickly skyrocketed to 10 Norcos, five valium to balance out (I was taking three Norcos right after work, which can make you a little antsy) and Xanax to totally fade at night. This was the end of January, and it felt like I was rapidly approaching a cliff, with no catcher in sight.

One of my tricks has been to get really into heavy TV dramas, and after finishing “Breaking Bad,” I started “Mad Men.” My drinking had leveled out to the point where I thought I could buy a fifth and handle it like a normal human. I had picked up a fresh bag of pills that night (12 or so assorted), so my plan was to chase a few with a scotch on the rocks. I woke up the next day around 9:30 a.m., still drunk as a boozer at closing time, and noticed the small, Ziploc pill bag, and the fifth, were empty. I knew they had gone down the hatch, because the baggie was by my bedside and there were no puddles on the floor. Immediately, I called my contact and sped off like Henry Hill in “Goodfellas,” got a gram and more pills, and more booze. This was all happening on autopilot, with the classic rock of 100.3 The Sound providing the soundtrack to my binge (“Rip This Joint,” one of my favorite Stones songs and an extremely deep radio cut, kicked into gear and my response was to accelerate). Basically I didn’t die, but I was … slowly. I couldn’t look at pictures or newscasts on my mom’s story. All I thought about was not thinking.

I remember waking up after the binge, and my favorite “Saved by the Bell,” the one with Ruth Buzzi as Screech’s Mom (I believe the episode is simply called “House Party”), and Zack and the gang break her favorite Elvis bust. I found myself cracking a crusty smile, remembering after-school days of “Saved by the Bell,” tree climbing, countless basketball games of H.O.R.S.E., and my mom’s voice faraway calling me home for dinner. There are a million examples of pop culture playing into our lives. I know my wedding song “Just Like Honey,” and I’m single. I would kindly like a montage of pictures queued to my favorite songs playing at my funeral.

I’ve been clean for a little over a month now, and pop culture helps, but it’s ultimately humanity that will save you. A lot of life happens after midnight, but I don’t have many regrets. It’s like hearing a song you shared with a failed relationship and that glorious, sunburst moment you can hear that song and not sink into depression or shameful tears. The fact is: “Saved by the Bell,” Superchunk, “Goodfellas,” “Fargo,” “Freaks and Geeks,” Ween, “The Simpsons,” “The Sopranos,” the Replacements: These documents will always be there when I need them. Drugs and drink will sadly always be there if I slip. The memories of my mom will forever be in my head, in a sunlit room, where I can always find her. Friends and family die off, as sad and inevitable as that may be. The only thing you can do, ladies and gentlemen, is want to heal yourself.  And that’s that.