Roger Waters: Why I must speak out on Israel, Palestine and BDS

Salon exclusive: The Pink Floyd star details why he supports the boycott 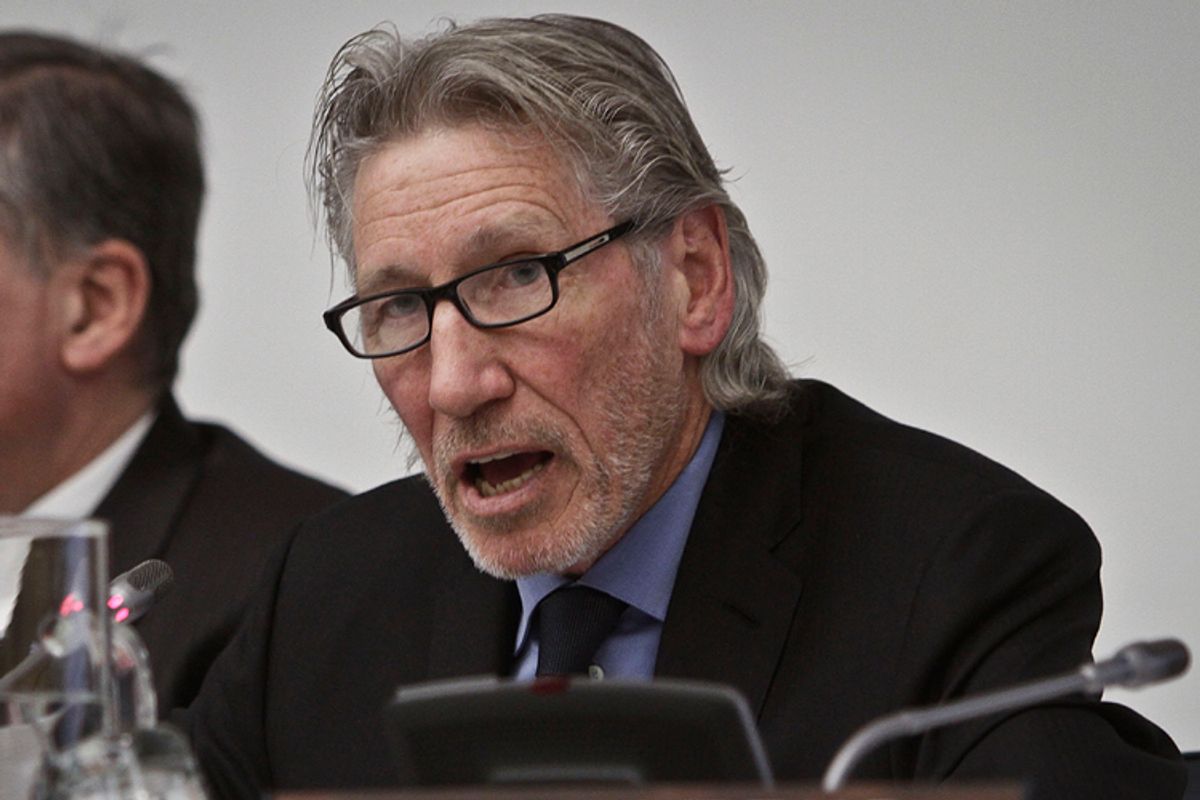 Seventy years ago, my father – 2nd Lt. Eric Fletcher Waters – died in Italy fighting the Nazis. He was a committed pacifist, and a conscientious objector at the start of the war, but as Hitler’s crimes spread across Europe, he swapped the ambulance he had driven through the London blitz for a tin hat and a commission in the Royal Fusiliers and he joined the fight against fascism. He was killed near Aprilia in the battle for the Anzio Bridgehead on Feb. 18, 1944.  My mother – Mary Duncan Waters – spent the rest of her life politically active, striving always to ensure that her children, and everyone else’s children, had no Sword of Damocles in the form of the despised Nazi Creed or any other despicable creed hanging over their heads.

Last month, thanks to the good people of Aprilia and Anzio, I was able to pay tribute to the father I never knew by unveiling a memorial in the town where he died and laying a wreath to honor him, and all the other fallen. Losing my father before I ever knew him and being brought up by a single, working mother who fought tirelessly for equality and justice colored my life in far-reaching ways and has driven all my work. And, at this point in my journey, I like to think that I pay tribute to both my parents each time I speak out in support of any beleaguered people denied the freedom and justice that I believe all of us deserve.

After visiting Israel in 2005 and the West Bank the following year, I was deeply moved and concerned by what I saw, and determined to add my voice to those searching for an equitable and lawful solution to the problem – for both Palestinians and Jews.

Given my upbringing, I really had no choice.

In 2005, Palestinian civil society appealed to people of conscience all over the world to act where governments had failed. They asked us to join their nonviolent movement – for Boycott, Divestment, and Sanctions (BDS) – which aims to end Israel’s occupation of the Palestinian territories, to secure equal rights for Palestinian citizens of Israel, and to uphold the right of Palestinian refugees to return to the cities and villages they were violently forced out of in 1948 and 1967.

After more than two decades of negotiations, the vulnerable Palestinian population still lives under occupation, while more land is taken, more illegal settlements built, and more Palestinians are imprisoned, injured or killed struggling for the right to live in dignity and peace, to raise their families, to till their land, to aspire to each and every human goal, just like the rest of us. The Palestinians’ prolonged statelessness has made them among the most vulnerable of all peoples, particularly in their diaspora where, as now in Syria, they are subject, as stateless, powerless refugees, to targeted violence, from all sides in that bloody conflict, subject to unimaginable hardship and  deprivation and, in many cases, particularly for the vulnerable young, to starvation.

What can we all do to advance the rights of Palestinians in the occupied territories, Israel and the diaspora? Well, BDS is a nonviolent, citizen-led movement that is grounded in universal principles of human rights for all people. All people! In consequence, I have determined that the BDS approach is one I can fully support.

I feel honored to stand in solidarity alongside my father and my mother, and alongside my Palestinian brothers and sisters, and so many others of all colors, faiths and circumstances from all over the world – including an ever-increasing number of courageous Jewish Americans and Israelis – who have also answered the call.

In the furor that exists in the U.S. today about BDS and the right and wrong of a cultural boycott of Israel, a quote from one of my heroes, Mahatma Gandhi, has been on my mind. He prophetically said, “First they ignore you, then they laugh at you, then they fight you, then you win.”  The BDS movement is fulfilling its promise and fits Gandhi’s description.  Once dismissed by many as a futile strategy that would “never work,” BDS has gained much ground in recent weeks, bringing with it the expected backlash.

Divestment votes at major U.S. universities, European pension funds divesting from Israeli banks that do business with illegal Israeli settlements, and the recent high-profile parting of the ways between actor Scarlett Johansson and the global anti-poverty group Oxfam are symptoms of a growing resistance to the Israeli subjugation of the indigenous people of Palestine, and also, to the decades of occupation of land designated by the U.N. as a future state for the Palestinian people.

And with each new BDS headline, the ferocious reaction from the movement’s critics, with Netanyahu and his AIPAC fulminations in the vanguard, has risen exponentially.  I think it’s safe to say BDS is in the “then they fight you” stage.

Some wrongly portray the boycott movement, which is modeled on the boycotts employed against Apartheid South Africa and used in the U.S. civil rights movement, to be an attack on the Israeli people or even on the Jewish people, as a whole. Nothing could be further from the truth. The movement recognizes universal human rights under the law for all people, regardless of their ethnicity, religion or color.

I do not claim to speak on behalf of the BDS movement, yet, as a vocal supporter, and because of my visibility in the music industry, I have become a natural target for those who wish to attack BDS, not by addressing the merits of its claims but, instead, by assigning hateful and racist motivations to BDS supporters like me. It has even been said, cruelly and wrongly, that I am a Nazi and an anti-Semite.

When I remarked in a recent interview on historical parallels, stating that I would not have played Vichy France or Berlin in World War II, it was not my intention to compare the Israelis to Nazis or the Holocaust to the decades-long oppression of the Palestinians.  There is no comparison to the Holocaust.  Nor did I intend or ever wish to compare the suffering of Jews then with the suffering of Palestinians now.  Comparing suffering is a painful, grotesque and diminishing exercise that dishonors the specific memory of all our fallen loved ones.

I believe that the root of all injustice and oppression has always been the same – the dehumanization of the other. It is the obsession with Us and Them that can lead us, regardless of racial or religious identity, into the abyss.

Let us never forget that oppression begets more oppression, and the tree of fear and bigotry bears only bitter fruit. The end of the occupation of Palestine, should we all manage to secure it, will mean freedom for the occupied and the occupiers and freedom from the bitter taste of all those wasted years and lives. And that will be a great gift to the world.

We were all equal