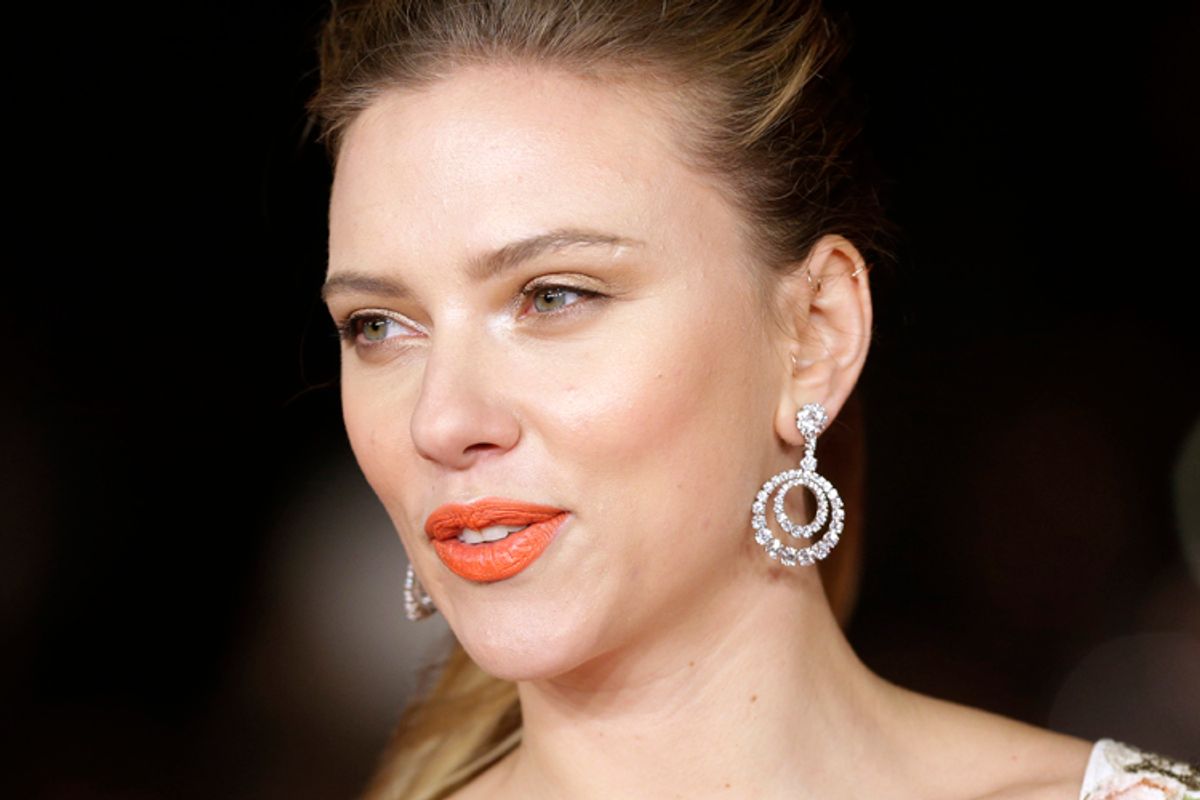 Scarlett Johansson seems to be rebranding herself -- but given her unconvincing defense of herself and criticism of the haters, her fans might prefer it if she kept silent on some issues.

The pneumatic actress, a mainstay of fashion magazine covers, has recently given interviews to The New Yorker and The Guardian in which she reflects upon her career. It's precisely the right moment for her to take stock, coming off of a great critical success ("Her") and anticipating the April releases of both a surefire hit ("Captain America: The Winter Soldier") and an edgy indie ("Under the Skin"). No one can blame Johansson, who's commonly asked about her personal life or fashion, for wanting to delve a little deeper.

But talking about the work is one thing. Johansson seems ill-equipped to defend her involvement in recent controversies, and tends to criticize her critics. For instance, in both interviews, Johansson defends her engagement with the brand SodaStream. The home seltzer maker is produced in a factory in the occupied West Bank; in order to endorse the project with a Super Bowl ad, Johansson had to resign as global ambassador for the humanitarian aid group Oxfam. Johansson told The New Yorker's Anthony Lane:

"I think I was put into a position that was way larger than anything I could possibly — I mean, this is an issue that is much bigger than something I could just be dropped into the middle of."

That's true. But Johansson wasn't dropped into a global controversy against her will; she chose to accept a check from SodaStream and, subsequently, to quit her advocacy work in order to keep the lucrative opportunity. And, far from keeping up the defense that Middle East politics are beyond her ken, Johansson makes bizarre allegations about the SodaStream factory in The Guardian, telling journalist Carole Cadwalladr:

"I stand behind that decision. I was aware of that particular factory before I signed it [...] it still doesn't seem like a problem. Until someone has a solution to the closing of that factory to leaving all those people destitute, that doesn't seem like the solution to the problem. [...] I'm coming into this as someone who sees that factory as a model for some sort of movement forward in a seemingly impossible situation."

The West Bank is indeed a difficult situation, but Johansson's representation of herself as someone with a level of perception greater than that of the human rights groups that have condemned profiting from occupied territories is the sort of thing people talk about when they wish actresses wouldn't talk politics. Johansson has broken her silence in the past, but it's been about amiable things -- endorsing her friend Scott Stringer for municipal office in New York, for instance. She's entitled to her opinion, but this feels excessive, a defense of her taking SodaStream money that's worse than the initial offense.

Worse still is her condemnation of Dylan Farrow, whose op-ed making allegations of abuse against Woody Allen in the New York Times asked Johansson, among other stars, how she would feel if Allen had abused her. (Johansson and Allen have worked together on three films, and she was widely perceived as his "muse" in the mid-to-late 2000s.) Johansson told The Guardian:

"I think it's irresponsible to take a bunch of actors that will have a Google alert on and to suddenly throw their name into a situation that none of us could possibly knowingly comment on. That just feels irresponsible to me."

Johansson goes on at some length about how she has no opinion about the allegations against Allen and that those who expect her to are barking up the wrong tree. But she doesn't have no opinion, for all that she portrays leaving Allen alone as the only fair response. Having no opinion is tantamount to having an opinion of Allen's lack of guilt and the degree to which he ought to continue making films. It's an opinion others share (clearly, or else Allen's career would be over), but not something that can be framed as utter equanimity. It's defensive -- to an ugly degree that Johansson's claim she's been receiving mean Google Alerts doesn't mitigate.

She went yet further in a brief aside to The New Yorker: "I don’t see why anyone wouldn’t" work with Allen, she remarked, as though to differ from Johansson's defense of Allen is to be not just irresponsible but wrongheaded. Not merely should the public refrain from commenting on Allen, but no one ought to turn down the opportunity to work with him.

It's an open secret, or just common knowledge, that stars almost never have to comment on things that they don't want to. Access to celebrities has never been more brokered -- indeed, Lane notes that a condition of his meeting Johansson was accepting that he was not allowed to ask about her reported pregnancy. So Johansson wanted to address the SodaStream and Allen controversies, and wanted to do so in a manner devoid of humility or open-mindedness. In responding to both issues over the course of two interviews, Johansson refused to accept that she might be criticized for any reason other than her critics' inanity and cluelessness. Maybe it's time to go back to the substance-free puff pieces that come with lavish photo spreads in Vogue or Elle -- because, for Johansson, this is a bad look.