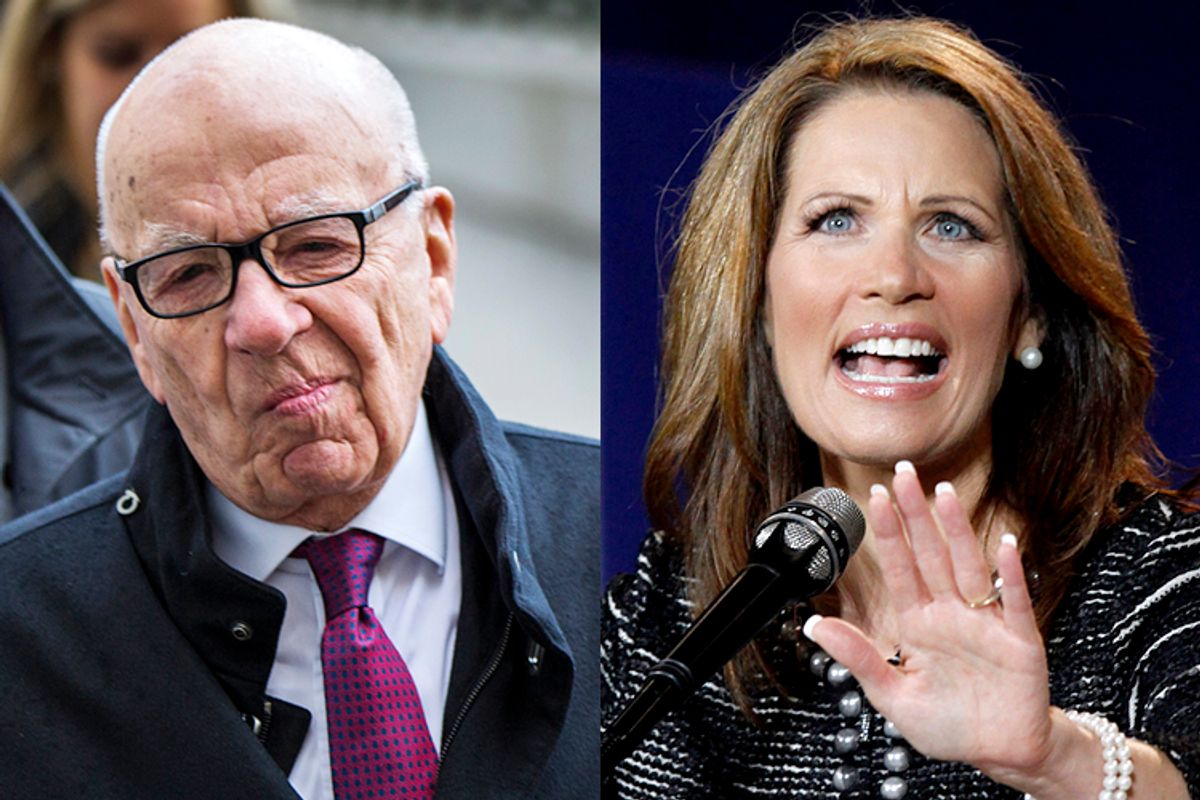 It’s St. Patrick’s Day, time for my annual ritual of ethnic angst and ambivalence. I grew up proud to be Irish American, since I was raised to think of us as underdogs and freedom fighters; as an adult, it’s hard to see so many of my people have become overdogs (or overdog defenders) and freedom squelchers. I like the way Malachy McCourt puts it: “My attitude is, St. Patrick banished the snakes from Ireland and they all came here and they became conservatives.” So today, while I have cousins I love marching down Fifth Avenue in the parade, I support Mayor Bill de Blasio’s decision to stay away as long as parade organizers continue to exclude LGBT groups from marching.

Now Rupert Murdoch has come to the defense of Irish freedom by attacking gays for having “bullied” companies and politicians into pulling out of parade sponsorship.

First it was Michele Bachmann; now the brave Murdoch is speaking up about the scourge of gay bullying. It’s preposterous and offensive, at a time when the bullying of LGBT young people and adults is a national crisis. But the right’s grievance machine has decided conservatives are the victims of the LGBT community, not the other way around. They’re getting really good at this.

Bachmann denounced “gay bullying” after Arizona Gov. Jan Brewer vetoed a law that would have essentially made it legal for businesses to discriminate against LGBT customers. "The thing that I think that is getting a little tiresome is, the gay community thinks that they've so bullied the American people and they so intimidated politicians that politicians fear them, and so they think that they get to dictate the agenda everywhere," Bachmann told radio host Lars Larson.

The Minnesota congresswoman says these gay bullies are violating her religious freedom, and that’s essentially the argument Murdoch is making (poorly) when he calls the St. Patrick’s Day parade “a religious parade.” Hey Rupert, it’s not a religious parade. As Irish Central’s Niall O’Dowd wrote Monday: The parade was never intended as an exclusively Irish Catholic parade when it first started. It was a celebration of Irish heritage, pure and simple. The parade needs to get back to its roots." It’s grown closer to the church over the years, although typically, the Archdiocese likes to cover up its controlling role.

This is a sad and self-defeating fight by parade organizers. As O’Dowd notes, they’re marginalizing themselves. Politicians like de Blasio and Boston’s Marty Walsh are being true to their own values in boycotting their city’s parades as long as LGBT groups are denied full participation. And businesses like Guinness and Heineken and Samuel Adams are being true to their bottom line, respecting the basic human rights of millions of their consumers.

Once again, it seems, so many Irish Catholics have forgotten where they came from. Rep. Paul Ryan is only the latest Irish Catholic to look away from the long history of anti-Irish discrimination based on our alleged laziness and “culture” of dependency and poverty. The English used the Great Famine as an excuse to teach the lazy Irish a thing or two about developing a work ethic for the industrial age, withholding aid because the Irish were prone toward “dependency on government.” Ryan has said his ancestors fled the famine; Ryan himself obviously fled the lessons of their suffering. Everything Ryan says about the "culture" of "inner city" men was said about his forebears.

In an era when even Pope Francis has declared “Who am I to judge?” when asked about the place of gays in the church, parade organizers have an easy out if they want it. But right wing culture warriors like Bachmann and Murdoch have an investment in Irish Catholics making themselves out to be victims, and joining their faux-crusade for religious freedom. Fox News thrives thanks to the paranoia and self-pity of its older, white, conservative audience. Just like Guinness, Murdoch is making a business decision here.