The character of "Lizzie" commits the worst crime imaginable. Thankfully, they don't make us watch -- not exactly. 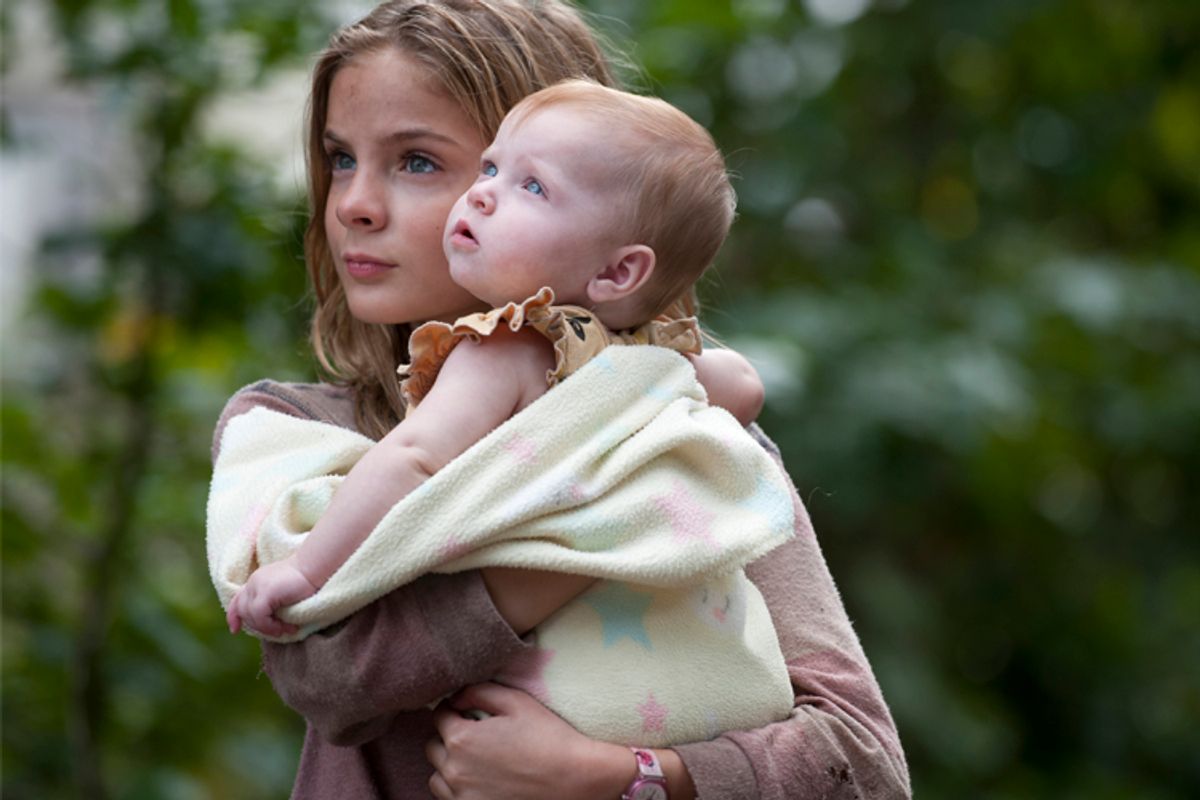 Last week, I wrote about the creepy kids of Sunday night primetime. Unfortunately, at the time of my writing, I had not been made privy to an advance of last night’s thoroughly disturbing episode of AMC's “The Walking Dead.” Unholy shit! Sorry if it’s too early for spoilers, but "The Grove" out-creeped not only anything you might see on a major network, but itself – going from “Dead’s” usual gruesome zombie killing to shocking pre-teen sororicide in just under an hour. Luckily, the show runners demonstrated a quality that the show’s detractors have long accused them of lacking: restraint. While the character of Lizzie did, in fact, murder her younger sister, we didn’t have to watch it in real time.

Fans of the show are familiar with the doe-eyed tween’s sad delusions about the nature of the undead. She named zombies, spoke to them, believing them to be only “different,” not soulless and deadly. I confess to having found the character (played by Brighton Sharbino) to be a little tedious and irritating in her childish fervor. (This episode revealed that Lizzie had been the culprit feeding rats to the walkers outside the prison. No surprise there.)

Last night, though, Lizzie’s behavior took on a terrifying intensity that was mesmerizing no matter how difficult it was to watch. It became clear that the child was mentally unstable as she launched into uncontrollable screaming fits. Maybe it’s a stretch, but I couldn’t help but think about NBC’s “Parenthood” and how the autistic teenager Max becomes unpredictable and highly emotional even during the best circumstances. If today’s pop culture has taught us anything, it’s that everything bad is infinitely worse during a zombie apocalypse.

While there are those who object to “The Walking Dead’s” depictions of violence, there are plenty who delight in it – or at least enjoy the gore as an integral part of the fantasy. Thankfully, those folks will not be huddled around office desks this morning raving about the graphic manner in which Lizzie, hoping to see the smaller girl rise from the dead, carved up her little sister Mika (Kyla Kenedy). Instead, we only see the dead girl lying on the grass in the background, her manic sister standing above her, blood dripping down her arm and the knife still in her hand. It’s certainly a grim shot, but it could have been far more explicit. For the gore-porn hounds, there was a scene only minutes earlier wherein undead burn victims stumbled out from the trees only to have their crispy, blackened heads blown open by rifle and pistol fire. But for me, nothing was more horrific than hearing Lizzie, fresh from a human kill, confess offhandedly that her next victim was to be the baby, Judith.