After I bashed him in a post, he shocked me by calling to pick my brain. And his new film suggests he was listening 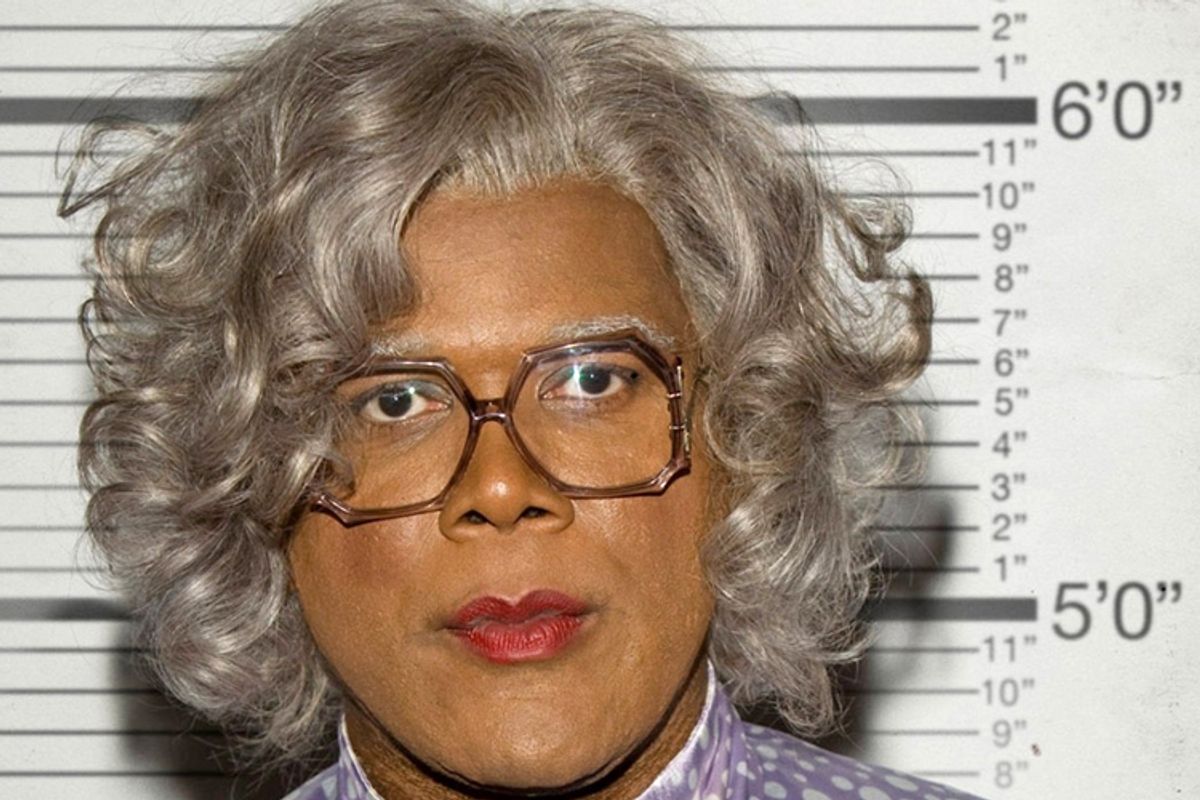 I have a love-hate relationship with Tyler Perry’s work. When his first film, "Diary of a Mad Black Woman," debuted in 2005, I went out to see it eagerly, spurred on by my family’s recent introduction of his Madea stage plays to me on a trip home from graduate school. Born and raised in Louisiana, my home state, by a family of devout Christian women, like I was, Perry’s deep-fried brand of Southern humor, open Christian proselytizing and unapologetic love of all things black and working class appealed to me. I also appreciated, in those early films, his willingness to deal with issues that plague black women’s lives – domestic violence, sexual trauma and poverty. Still new to feminism at the time, I rocked hard with Perry, and accused my grad school friends of being out of touch and overly academic when they complained about his treatment of women.

At some point, however, I began to realize that there was a script to his movies, and centrally the script involved emotionally damaged black women who were bitchy, selfish, irresponsible and unloving. Only two things would save them: Jesus and penis. And we were all supposed to ride hard, pun intended, for these movies because he delivered the penis to us on beautiful platters – men like Boris Kodjoe, Shemar Moore, Rick Fox and Rockmond Dunbar.

Around the year 2012, I stopped going to see his movies, because I would leave the cinema feeling like I had been beaten and spat upon while being told I was loved. It was the very definition of abuse. Last June, I expressed as much in a post at Crunk Feminist Collective called “Tyler Perry Hates Black Women.”

In a completely unexpected twist, Perry saw the column and had his assistant hunt me down via the Internets and set up a phone call. On June 19, 2013, an Atlanta number lit up my screen.

When I said, “hello?,” Perry’s voice boomed through the phone, “Dr. Cooper, this is Tyler Perry.”

“No, please call me Tyler. I see you’ve written some things about me, and I’m calling to get you to explain.”

I attempted a few pleasantries, but Perry, a busy man, quickly dispensed with those, and got right to the matters at hand. “You said I hate black women, and I want to know how you came to those conclusions.”

“Well,” I began, “let’s start with your movies.” So one by one, Perry listened as I brought up film after a film – I had seen all but two of his movies -- in which a woman had been punished, sometimes to the point of violence, for being assertive and ambitious. To his credit, Perry did not argue his case, because as he told me, “I didn’t call to try and change your mind. I simply like to hear from my critics every now and then.”

He simply reasserted that in his art, he had to tell the stories that were true for him. I challenged many of his truths, particularly about elitist, cold, calculating middle-class black women, but in each instance he brought out examples from his own life to support his artistic choices.

Perry, as I had long suspected, is a deeply personal storyteller; like many artists, I think his work is his therapy. I’m not so sure that is always fair to the rest of us, particularly his black and female audience, who come with our own share of traumas that we are trying to work out.

To his credit, Perry and I talked for a full 40 minutes about his work. And he listened to my criticisms. Never rude, there were even a few moments of humor. When I told him that he was welcome to call back in the future, he replied, “I’m never calling your ass again,” and we both laughed heartily. It was the realest of moments, and it was delivered with that mix of sass, familiarity and Southern comfort that only a down-home boy can deliver. I wasn’t mad.

And he told me that the one thing that had stuck with him was this challenge from me: “Is it possible for you to elevate one group of people in your films – say, working-class black women, whom he loves – without throwing the other group – often educated black women -- under the bus?” He said that question was “profound,” and that he would mull it over. We amicably ended our call.

During our conversation he mentioned his newest movie, “The Single Mom’s Club.” And it was with our conversation in mind that I ventured out, with more than a little trepidation, to see it this past weekend. I found myself hoping to see growth, desiring to be able to say something good. It turns out that being a critic is much more difficult when the objects of your criticism are paying attention. Still, I told Perry that as long as his films did harm to black women he could count on me to call him out, because we deserve better than that.

I’m happy to say that I mostly enjoyed "Single Mom’s Club." Centered around the lives of five women -- May, Jan, Hillary, Esperanza and Lytia -- who are single for a range of reasons – divorce, failed relationships and single parenting by choice — this multiracial cast of women, two black, two white and one Latina, band together to support each other as they steer their adolescent children through the stage of acting out and being self-destructive.

There are many critiques of the movie, and Olivia Cole has delivered a scathing one here. But I will say that this movie is one of Perry’s better efforts. I didn’t see him punishing women for being ambitious, but rather, in Jan’s case, pointing out the ways that white men can be perniciously sexist in creating corporate cultures that don’t support women who want to work and have families. For once, the middle-class black woman, Nia Long’s character May Miller, was not punished and pathologized for being ambitious or blamed for having a child by a man with a drug problem.

Cole argues that Perry trafficked in the stereotype of the hypersexual Latina, and she is certainly one of only two women shown in an explicit sexual situation in the movie. But I thought Perry did a good job of showing the abusive, manipulative machinations of her ex-husband, and the way he tried to turn their daughter against her by turning her into the bad guy. Still, I do think that black portrayals of Latina characters – in this film and in BET’s hit show "Being Mary Jane" – do leave something to be desired, and this is a tension that the Browning of America will force us all to navigate more effectively.

Perry in past movies also seemed to have a special ire for ambitious women like Jan and May. These two women know each other because Jan is a publisher and May a writer. Perry comically deals with Jan’s classism and racism, and her general social awkwardness. Cole reads Perry’s choice to highlight both Jan’s and May’s long periods of celibacy as recourse to a stereotypical ideal of Jan as frigid and May as dainty and pure. I think that is a fair critique, but I also think we should pay attention to the statistics that tell us that upper-middle-class women across races, particularly those who are more career driven, often have less time for romantic relationships. I have plenty (more than I can count on two hands) highly educated black women friends who’ve been celibate between five and 10 years. It’s not uncommon.

I was most interested to see how he would handle Cocoa Brown’s character Lytia. She’s dark-skinned, poor, plus-sized, has a gaggle of children, and works at Waffle House. And while I know that this body type and social situation conjures the very stereotype of a welfare queen, I thought Perry resisted attempts to read her in this way, by pointing out that she chooses to work rather than be on welfare like her sister, even though she barely makes enough to get by at her job. For this, she is accused of trying to raise her son to be white. Though two of her sons are in prison, she is struggling mightily to make the youngest one “be somebody.” The reality is that the prison industrial complex has ravaged many black families, and I appreciate Perry showing a hardworking, working-class mom with dreams for her son. She’s tough, and her son resents being a latchkey kid. But her love for him is clear.

Perry’s treatment of Lytia, and setting her up as a foil against her willing welfare-queen sister, is certainly a story that could be more nuanced. But having grown up as the latchkey kid of a hardworking single mom, who was often resented by those in the community for wanting more, I recognize much truth in the scenario presented.

Unfortunately, Perry did not manage to escape his continued reliance on the threat of violence to bring tough women into line. Lytia has an ardent male suitor who pursues her throughout the movie. Eventually, he straight-up manhandles her in order to coerce her affection. I didn’t appreciate that scene, as it bordered on sexual assault. However, Perry escapes this claim by having Lytia manhandle her suitor in return and then return his sexual affection. The idea that big women or tough women must be manhandled in order to compel their submission is a recurring theme in Perry’s movies, and while I certainly appreciate a man who knows how to physically engage with the body of big woman, manhandling is not necessary.

While I know it is patriarchal for all the women’s happy endings to revolve around ending up with a man, I’m a sucker for romance, and I was happy that each woman found a partner. But I also think that the movie is celebrating these women’s resilience in the face of tough life challenges, and that their happy endings had as much if not more to do with this.

Trust that I, too, didn’t expect to be so generous about this movie. Perhaps receiving a phone call from Tyler Perry has dialed down my ire considerably. But mostly I think he gets a lot right in this film. And I think the clearest marker of that is the fact that it was his lowest-grossing opening weekend to date. Raking in only $8.8 million at the box office over the weekend, Perry had a dismal showing.

This may mean that his nearly decades-long monopoly on black viewership and high-grossing movies is over, particularly with the success of films like "Think Like a Man," "Ride Along" and "About Last Night." And that, I think, is a thing to celebrate. But if the terrible reception of this movie means that his audience — composed mostly of black and working-class Christian women – can’t get down with his more mainstream films, then I wonder what this means for how this community understands itself. And I wonder what it means, that for the first time in a long time, based solely on what Perry set out to do in this film, I think he gets it very nearly right.