The destructive myth about religion that Americans disproportionately believe

The U.S. is the last remaining highly developed country that hasn't abandoned this problematic belief

This week, Pew Research Center published the results of a survey conducted among 40,080 people in 40 countries between 2011 and 2013. The survey asked a simple question: Is belief in God essential to morality? While clear majorities say it is necessary, the U.S. continues to be an outlier.

In 22 of the 40 countries surveyed, the majority says it is necessary to believe in God in order to be a moral person. “This position is highly prevalent, if not universal, in Africa and the Middle East,” says the report. No surprise there, but Asian and Latin countries such as Indonesia (99 percent), Malaysia (89 percent), the Philippines (99 percent), El Salvador (93 percent), and Brazil (86 percent) all fell in the highest percentile of respondents believing belief in a god (small G) is central to having good values.

Interestingly, clear majorities in all highly developed countries do not think belief in god to be necessary for morality, with one exception only: the USA.

So what of the U.S.? A comparatively eye-popping 53 percent of Americans essentially believe atheists and agnostics are living in sin. Despite the fact that a research analyst at the Federal Bureau of Prisons determined that atheists are thoroughly underrepresented in the places where rapists, thieves and murderers invariably end up: prisons. While atheists make upward of 15 percent of the U.S. population, they only make up 0.2 percent of the prison population.

With the exception of the U.S. and China, the survey finds that those “in richer nations tend to place less emphasis on the need to believe in God to have good values than people in poorer countries do.” The chart below illustrates this point: 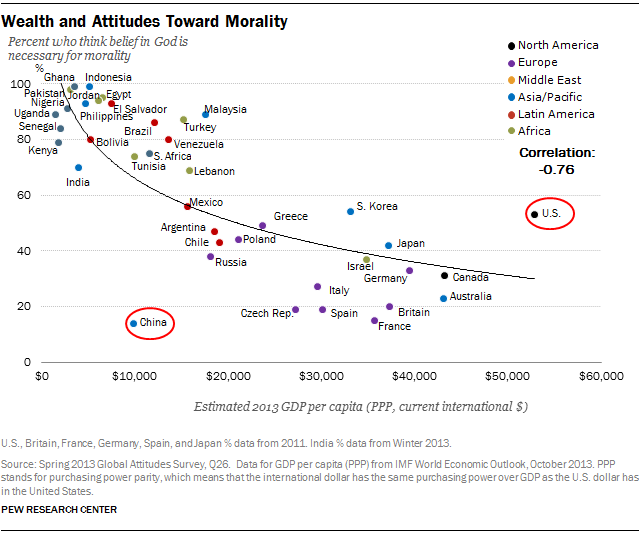 Staying with the U.S., this correlation between a high rate of poverty and high degree of religiosity is supported by a 2009 Pew Forum “Importance of Religion” study that determined the degree of religious fervor in all 50 states. The study measured a number of variables including frequency of prayer, absolute belief in God, and so forth. Led by Mississippi, Alabama and Arkansas, nine of the top 10 most religious states were Southern. Oklahoma ruined the South’s clean sweep by sneaking in at No. 7.

Not coincidentally, led again by Mississippi, Alabama and Arkansas, nine of the top 10 poorest states are also found in the South, while Northern and Pacific states such as Wisconsin, Washington, California, New York, New Hampshire and Vermont are among the least religious and the most economically prosperous.

Drilling down further, a 2011 Barna Group study titled "Diversity of Faith in Various U.S. Cities" found that “the cities with the highest proportion of residents who describe themselves as Christian are all in the South.” Leaders are Shreveport (98 percent), Birmingham (96 percent), Charlotte (96 percent), and Greenville (94 percent). The cities with the lowest percentage of religiosity include New York, Boston, Los Angeles, San Francisco, and Seattle. David Kinnaman, who authored the Barna study, said the research “confirmed many spiritual assumptions about various regions of the country. The South hosts many of the nation’s Christians, while the West and Northeast play to more secular stereotypes.”

In an earlier piece, I wrote that the primary reason for abject child poverty in these Southern states is that more than a third of children have parents who lack secure employment, decent wages and healthcare. But thanks to religion, these poor saps vote for the party that rejects Medicaid expansion, opposes early education expansion, legislates larger cuts to education, and slashes food stamps to make room for oil and agriculture subsidies on top of tax cuts and loopholes for corporations and the wealthy. Essentially, the Republican Party has convinced tens of millions of Southerners that a vote for a public display of the Ten Commandments is more important to a Christians' needs than a vote against cuts in education spending, food stamp reductions, the elimination of school lunches and the abolition of healthcare programs.

Isn’t it time to save the South from itself, and/or to save America from the South? These studies and the current political zeitgeist remind us that it’s the religious South that continues to hold the country in some kind of 1860s time warp. While the more secular America is trying to deal intelligently with real problems — taxes, spending, environment, healthcare, education, inequality, and poverty – the South is rooted in religious fanaticism, ancient grudges and demagoguery.

While the Republican Party retains its monolithic hold on the South, the rest of America remains deprived of universal healthcare, electric cars, sensible gun control laws, carbon emission bans, a progressive tax structure that underpins massive public investment, and collective bargaining laws that would compress the income inequality gap. In other words, without the South’s religiosity, "America" would again look like a developed, secular country, a country where it’s probable for an atheist to be elected into public office, and where the other 50 million law-abiding atheists wouldn’t be looked upon as rapists, thieves and murderers.