In a private video for employees, Target warns workers a union "would change our fast, fun and friendly culture" 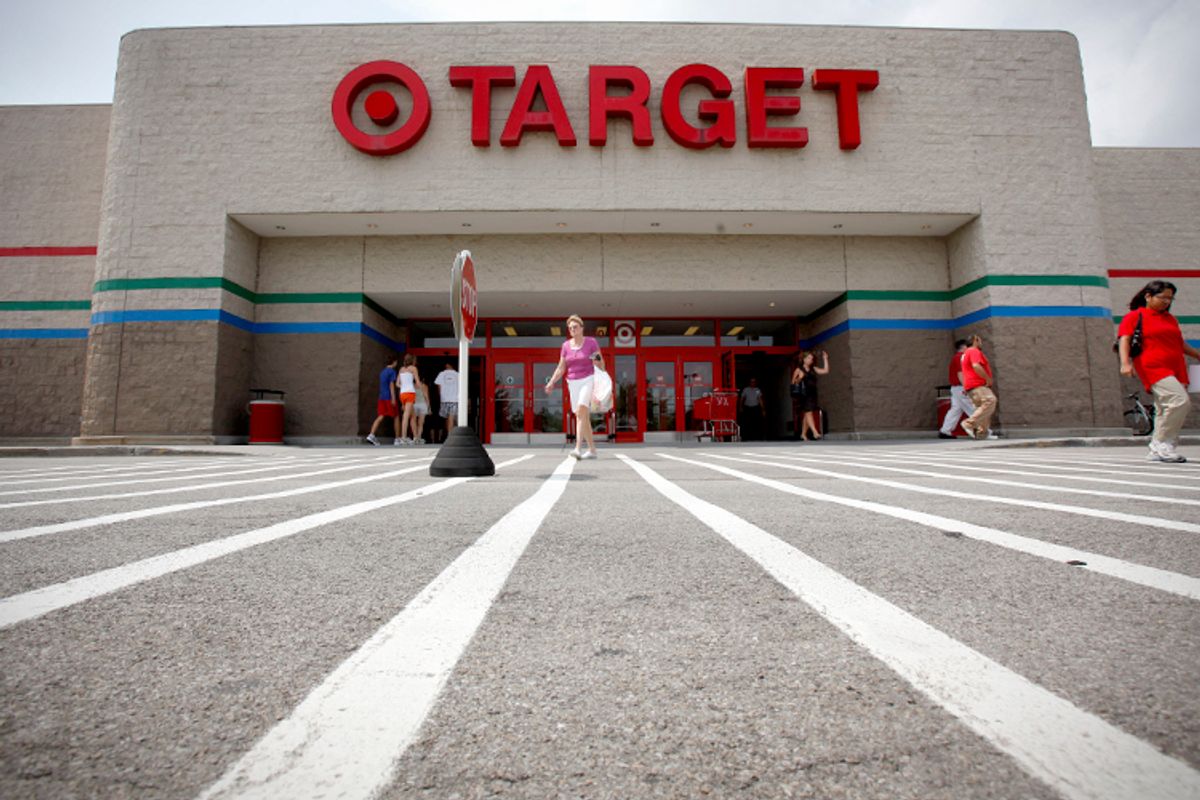 Target’s anti-union video for employees -- which previously drew ridicule for strained and earnest delivery, kitschy and melodramatic graphics, and sub-par production values -- appears to have gotten a makeover.

The newer video, reviewed by Salon (but which is not being re-posted for legal reasons), echoes or repeats verbatim many of the lines from its predecessor, which Gawker’s Hamilton Nolan posted in 2011 and mocked as “shitty propaganda” with “the production values of an eighth-grade educational film.” Gone are the switch to black-and-white (to depict a unionized universe); the trippy image of $20 bills stacking up against a shifting red background (to represent union dues), and the sight and sound of a slamming door (to portray being cut off from communicating directly with management). An actual Target executive no longer makes a cameo to stiffly set forth Target’s stance on organizing; instead, the two stars of the new film ("Dawn" and "Ricardo," replacing "Doug" and "Maria") make all points on his behalf.

But the message is much the same: Narrators tell employees -- whom union organizers charge were required to watch the video in mandatory meetings -- that right now, “We put people in jobs because they’re well-suited for them, not because of the day they happened to get hired.” If a union came in, “chances are they would change our fast, fun and friendly culture, with their way of doing business.”

Workers are warned that “this is a very competitive business that we’re in,” and that “If Target faced rigid union contracts like some of our competitors, our ability to serve our guests could suffer dramatically – and with fewer guests, what happens to our team?” Even if they vote union, they’re told, “Management doesn’t have to agree to any union demand.” The video closes with a pledge that “there are always people you can talk to,” and a list of five places to take your questions: “Supervisors/leaders”; “Human Resources”; “Chat Sessions”; “Best Team Survey”; and “Employee Relations and Integrity Hotline” (not listed: rank and file co-workers).

The Target video, “Think Hard: Protect Your Signature,” was shown to Valley Stream, N.Y., Target employees in the lead-up to a 2011 unionization vote, according to the United Food & Commercial Workers union. Target was compelled to turn over the video as part of the National Labor Relations Board’s investigation of alleged illegal union-busting prior to that election, in which employees voted against becoming Target's first unionized employees. In a 3-0 decision last year, the NLRB found sufficient wrongdoing by Target to throw out that election result, paving the way for a new unionization vote. However, citing intimations of lost jobs (including in that now-hipper video) and an alleged purge of union activists (whom the NLRB has not ordered Target to reinstate), the UFCW union last week told Salon that it now plans not to pursue another vote there.

“The system failed the workers, as it’s going to continue to fail the workers,” said UFCW Local 1500 organizing director Aly Waddy. Before the election, she alleged, Target used a mix of legal and illegal tactics to scare and spy on workers; after the union was defeated in the vote, she charged, the company rewarded or punished employees based on their stance toward the union, and used a four-month store shutdown for renovations as a pretext to transfer or terminate 20-some pro-union activists. “None of the workers that started the campaign are there …” Waddy told Salon, “Workers have seen a company that’s gotten away with doing whatever it is that they wanted to do.”

While the UFCW filed charges with the NLRB alleging union activists were illegally targeted for termination, the union was unable to secure any rulings to that effect from the Labor Board. Instead, the NLRB decision throwing out the 2011 election results cited a company solicitation policy, which it found illegally interfered with workers’ organizing rights, as well as “a coercive interrogation, a threat of unspecified reprisals, and the distribution to employees of a leaflet that unlawfully implied a threat to close the store if employees selected the Union …”

Asked last week about the UFCW allegations and NLRB findings, a Target spokesperson emailed that Valley Stream employees had "strongly rejected unionization," and that "The judge dismissed the union's claim related to the temporary closure in its entirety." She said that the company had "reached out to the NLRB" to schedule a rerun election, "Out of respect for our team's desire to move past this issue ..." (Target did not confirm or deny the UFCW's report that Valley Stream workers were required to watch "Think Hard: Protect Your Signature" prior to the 2011 vote, but did say that the prior video reported by Gawker "is no longer used at Target," and noted that "we communicate with our team members through a variety of channels, including videos.")

In sworn testimony, Tashawna Green, a union activist hired by the UFCW after being fired by Target, described conversations in which members of Target management “told us not to let them hear us mention anything about a union” or “you could be terminated”; questioned her about comments she’d made in the media; and warned her to “be careful  of what you do ‘cause you never know what could happen.”

One flier provided to the NLRB (and to Salon), headlined, “WILL THE STORE CLOSE IF THE UNION GETS IN,” told workers, “There are no guarantees” and “The union has a terrible record of store closings," and ended with an urging to “VOTE NO” and an invitation to meet with management to get statistics on declining unionization and closings of unionized stores. Green testified that she “had team members ask me if this is true, that if the Union gets in, will the store close?” and that “A lot of people were concerned and scared” that was the case.

While the Target store is still standing and once again open for business, argued the UFCW's Waddy, “the company’s threats were made good,” when “the company got away with closing the store and cleaning house and getting rid of all the workers” pushing unionization. (According to the UFCW, almost none of Target's over 900 U.S. store remodels have involved shutting down the store.) While scrapping election plans, Waddy told Salon that the UFCW would “maintain communication” with workers at the Valley Stream, N.Y., store, and was in touch with Target employees elsewhere as well. (The UFCW's Target Change campaign maintains a website criticizing the company and inviting employees to get in touch.) Asked if the union would pursue another NLRB-supervised union election, she said, “We would really have to look at it case-by-case.”

Pro-union activists and academics have long warned that U.S. labor law’s wide berths and weak enforcement leave ample opportunities for both legal and illegal intimidation of workers who try to organize. (Salon has covered such allegations at name-brand giants including Wal-Mart, Amazon and NBC Universal, and lesser-known employers including artisanal bakery Amy’s Bread, pharmaceutical distributor McKesson and document storage company Iron Mountain.) 2009 research by Cornell’s Kate Bronfenbrenner suggests that employers hold mandatory anti-union meetings (like the ones in which UFCW says Target aired its revamped movie) in 89 percent of NLRB election campaigns, and are alleged to fire pro-union activist workers in 34 percent of campaigns and to threaten plant closings in 57 percent.

Like its predecessor, Target's post-makeover anti-union video closes with the words, "Refuse to sign, and keep Target union free." But whereas the old one touted the decline in private sector unionization to 8 percent of the U.S. workforce, the new one notes the rate has now dipped below 7 percent.