Can millennials be convinced to care about job creators? Maybe this guy in a leather jacket and glasses can do it 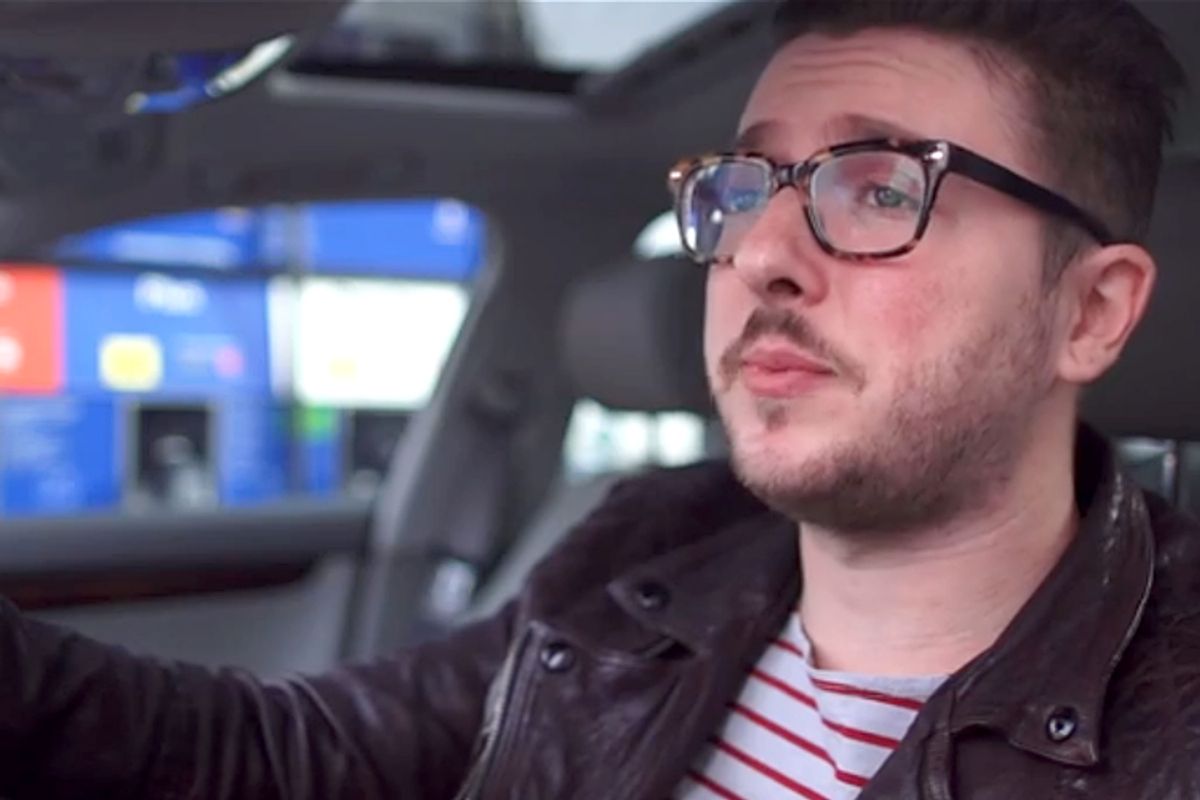 Everyone knows how hard it can be to market to millennials. Today's young Americans are wise to the traditional tricks of the pitchman. But one thing this generation responds to is sincerity. The best way to reach them is with an earnest, honest message from someone they can identify with. For a great example of what professional marketers think that means, take a look at this brilliant new ad campaign from the Republican National Committee. Meet Scott Greenberg, totally identifiable millennial guy who also happens to be a Republican:

Now it's true that millennials, on average, are less likely to buy or own cars than any other current generation of Americans. One-third of households headed by millennials under 25 had no car in 2011 (and only one-third of millennials actually head their own households), and fewer 16-24-year-olds had driver's licenses in 2011 than at any point in the last half-century.

But give the RNC some credit: Most millennials still believe that they need or will need to own a car (which, in most of America, is a completely accurate belief), they just find the cost of car ownership a burden. Just like Scott here! And that's why Scott is a Republican: Because they support an "all of the above" energy policy, which Scott sums up as, "solar, wind, shale gas, oil, whatever!" I mean, increased domestic energy production doesn't necessarily lower fuel prices in the U.S. because it is a worldwide market, and "all of the above" is actually the energy policy of both parties, but, you know, "whatever," as the millennials say. "LOL," they sext one another. "Let's frack some shale gas, YOLO."

(As for Scott's "heating bill at home," like I said, that is probably mostly a concern for the 34 percent of millennials who actually are in charge of their own homes.)

But Scott is not finished connecting with his peers from this gas station. In this second ad, he expresses sympathy for millennials who, unlike Scott, aren't working.

Scott is "ticked off" at politicians who "vote for regulations that make it impossible to hire anyone." (Which regulations? He doesn't specify.) "Listen," he says. "You can't help the unemployed by hurting the people who could employ them."

I'm sorry, Scott, but you definitely could help the unemployed by doing that. You could hurt the people who could employ them by raising their taxes and giving that money to the unemployed. Or you could hurt them by threatening to raise their taxes unless they agree to hire more people. I'm not saying either of those are the right way to help the unemployed, I'm just saying your argument has some holes. And, you know, it's sort of weird that your sympathies lie with the people who could employ your friends but don't, because they are mad at the government. I am just saying. Millennial to millennial.

In fact, millennial to millennial, one thing that connects both of your little messages here is that you seem to be saying you are a Republican because you support policies that will increase the profitability of certain Republican-allied industry interests, like business owners and energy companies, instead of just supporting direct action to help your fellow millennials deal with the real problems of high transportation costs and unemployment. Maybe instead of increased energy production and "not hurting job creators" we could try increased access to (and more reliable) public transit and, I dunno, having the government subsidize the hiring of (or directly hire) people who want to work? Just spitballing.

It's easy to laugh at Republican millennial outreach efforts, because all millennial outreach efforts by institutions run by rich old people are invariably hilarious and insulting, but at least this one has a guy who does look like a normal young (college educated, white, well-off) urbanite. It's not one of these guys. Scott Greenberg is saying strange, vague things that sound like they were written by someone trying to mask his actual agenda, but he is not openly condescending to young people (well, besides that stripey shirt) by referencing youth culture or awkwardly employing slang (or, god forbid, rapping). He's a Republican because he believes that helping the rich get richer will somehow make gas prices fall, and while I do not expect that message to resonate with many other people in Greenberg's demographic, it is at least a less hostile pitch than "I am a Republican because I think white men are a persecuted class" or "I am a Republican because the other guys are nerds and fags."

Unfortunately for the GOP, those more hostile sentiments are also the more common ones among Republicans of all ages, because the Republican economic platform pretty much only appeals to people with large investment portfolios. In other words, the GOP is screwed with youth voters not because of messaging problems, but because young Americans are less white, the white ones are less likely to harbor deep-seated racial resentments or hostility to gender equity, and all of them are much less likely to be rich.