"We can't live like this!" The huge Christie disaster the national media is missing 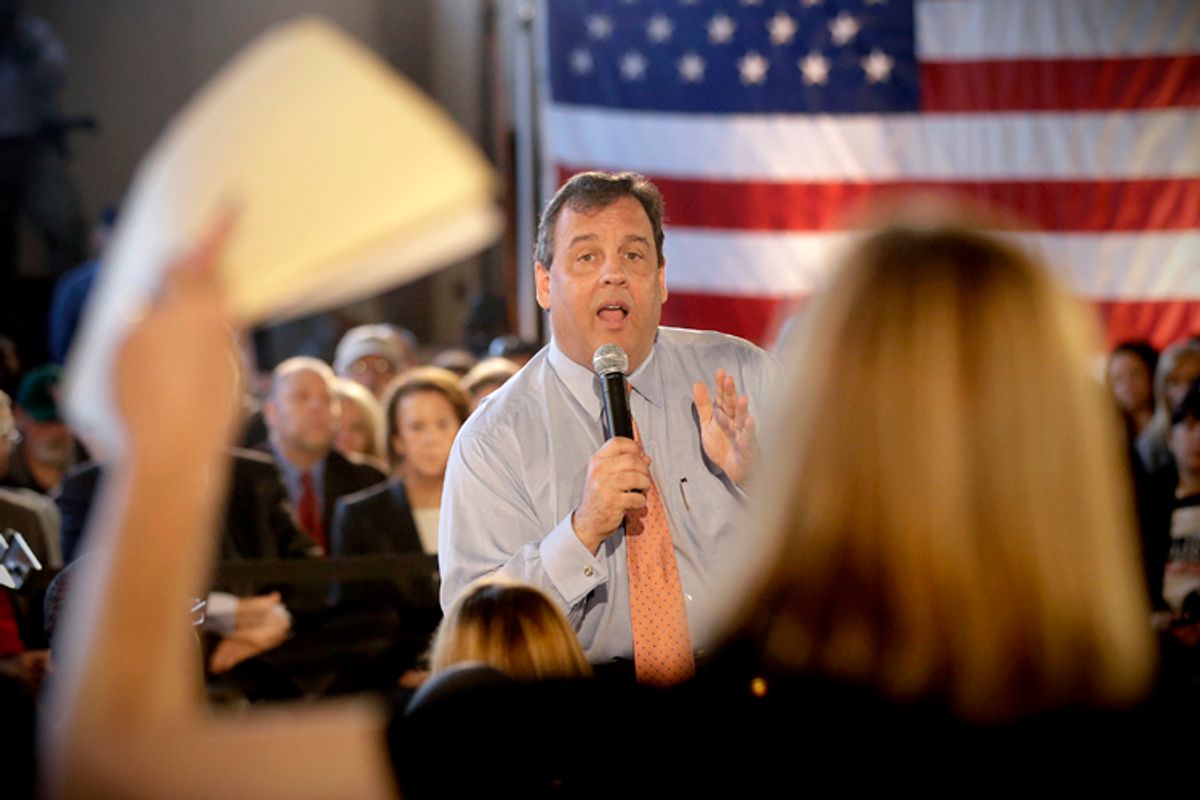 SOUTH RIVER, N.J. -- As New Jersey residents welcome the second spring since Hurricane Sandy, Gov. Chris Christie is being increasingly challenged by red tape-weary storm victims at his town halls, like the one he just did in South River in Middlesex County.

Several thousand households are still navigating a byzantine process to get the aid they need to get on with their lives. Local press reports have chronicled families with children still living in trailers. Their water pipes froze over while they waited for answers about the fate of their Sandy-damaged homes.

Now, post-"Bridgegate," the governor has to also share his town hall spotlight with activists from the left-leaning Working Families Alliance. The WFA has committed to dog him with unsolicited questions about "Bridgegate" and what they contend is Sandy mismanagement linked to Christie cronyism.

At South River, particularly hard hit by Sandy, more than a dozen WFAers popped up out of the audience confronting the governor. They chanted "New Jersey deserves better" as they were escorted out by police. A week earlier in Burlington County there had only been a half dozen.

At the Tuesday town hall Christie told the audience that it was the Communication Workers of America, the union representing state workers, that was behind the ongoing protests.

"They (the protesters) are recruited by the people who we, collectively we, have been standing up against for the last four and a half years--- the folks who want more and higher taxes from you so they can get bigger raises and more benefits," Christie said.

"We think the governor is trying to distract from the legitimate questions being raised by students, environmentalists, healthcare and housing advocates," says Rob Duffey, a spokesman for the WFA. Duffey confirmed the CWA was one of the group's supporters, which he said also included grass-roots groups and the Service Employees International Union.

Almost a year and a half after Sandy graphic evidence of that storm's wrath is still apparent in this part of Middlesex County, which includes Sayreville and Woodbridge. There are boarded-up homes right next to others back in good repair with St. Patrick's Day flags flying. Still others are in a kind of vacant limbo.

Gov. Chris Christie urged residents of this working-class community "to be patient" with the rebuilding process. But residents were clearly frustrated.

"People are getting short-tempered," said Gary Thomas, a retired police officer from Edison. "I know a lot of people who lost homes. They are still displaced.

"Promise me the world but now deliver. That's the thing. A lot of people are in distress. Still the help is hard to get. The banks, the mortgage companies don't want to hear much," says Thomas.

"I am hoping they get on the stick and move this faster, " says Dolores Androvich, whose home in Woodbridge was so badly damaged it was condemned. Androvich says she has been accepted for a flood buyout but has no idea if the proceeds from that deal will be enough to pay her mortgage much less sufficient to rebuild.

Androvich, who lives with her mother, has been living in temporary housing since Sandy struck. "My mother is over 70 years old. She has been displaced for almost a year and a half. We can't live like this."

Last month the  Christie administration quietly terminated the primary contractor responsible for helping Sandy victims navigate the Reconstruction, Rehabilitation, Elevation and Mitigation Program. In public comments Gov. Christie would only say the state and the contractor had "fundamental disagreements" over how the program should be run.

WNYC has reported the firm had contributed $25,000 to the Republican Governors Association, which Christie chairs. The RGA  has been a major contributor to Christie's campaigns.

The governor conceded the process has been fraught with challenges and delays for Sandy households still looking for a final resolution but said New Jersey's efforts compare well with New York City's and New York state's.

Christie has been sharply critical of what he says are lengthy environmental and historic reviews of Sandy applications by the federal government. HUD Secretary Shaun Donovan told a Senate panel the reviews were being turned around in a matter of weeks.

Christie is also still pointing to what he asserts was an unprecedented 90-day delay by the federal government, including the GOP-controlled house, in passing disaster aid in the aftermath of Sandy, which destroyed or damaged more than 365,000 homes in the state.

That "front end delay" is still having an impact, according to Christie. "For context, it was less than 10 days after Hurricane Katrina that Congress voted tens of billions of dollars in aid to Louisiana, Mississippi and Alabama."