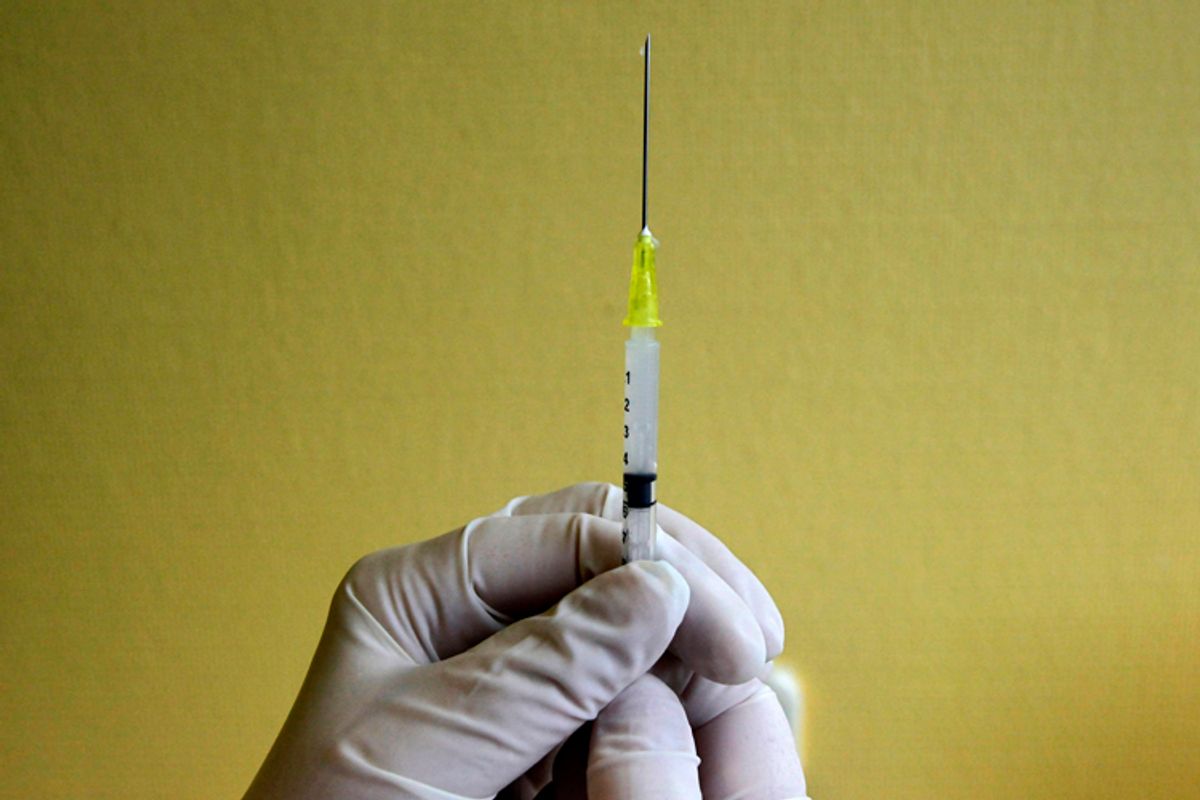 America, I want you to back away from the Fox News. I want you to turn off the talk radio, unfollow Donald Trump on Twitter and seriously reevaluate your commitment to some of those Reddit threads. Because it's turning your brain into a festering pile of paranoia. I'm just saying because I care.

The latest evidence – and by evidence I mean actual data culled by professionals and not "something somebody thought he heard in the backmasking on a Hendrix track" -- of our collective mania is a new study from the University of Chicago that reveals that nearly half of all Americans believe medical conspiracy theories. Nearly half. The findings, published this week in JAMA Internal Medicine, are culled from a study of 1,351 adults who were polled about their beliefs on six popular theories: "The CIA deliberately infected large numbers of African Americans with HIV under the guise of a hepatitis inoculation program," "Doctors and government still want to vaccinate children even though they know these vaccines cause autism and other psychological disorders," "The FDA is deliberately preventing the public from getting natural cures for cancer and other disorders because of pressure from drug companies," "Health officials know that cell phones cause cancer but are doing nothing to stop it because large corporations won't let them," "Public water fluoridation is really just a secret way for chemical companies to dump the dangerous byproducts of phosphate mines into the environment," and "The global dissemination of genetically modified foods by Monsanto is part of a secret program launched by the Rockefeller and Ford foundation to shrink the world's population." As the study's authors write, "49% of Americans agree with at least one medical conspiracy theory and 18% agree with three or more." Or, in the words of "30 Rock's" Tracy Jordan, "White dudes inject AIDS into our chicken nuggets." And this, right here, is how a man like Kevin Trudeau, a man who is now serving a 10-year jail sentence for lying about what the mythic "they" don't want you to know, managed to spend months on the New York Times bestseller list and make himself an embarrassment of riches.

In a nation in which a full third of the population rejects evolution and people go berserk disputing a TV show about science, maybe our not-based-on-anything-real-or-conclusive medical skepticism isn't surprising. The study's lead author, J. Eric Oliver, suggests the findings also reflect our difficulty with complex issues that are not black and white. "Science in general -- medicine in particular -- is complicated and cognitively challenging because you have to carry around a lot of uncertainty," he says. "To talk about epidemiology and probability theories is difficult to understand as opposed to 'If you put this substance in your body, it's going to be bad.' It's important to increase information about health and science to the public. I think scientific thinking is not a very intuitive way to see the world. For people who don't have a lot of education, it's relatively easy to reject the scientific way of thinking about things."

If your neighbor who thinks the "Left Behind" movies are totally going to happen also wants to believe the dentist is putting tracking devices in his fillings, it's a free country. (Side note: OR IS IT?) But the implications of a deep distrust of the health system have greater implications for all of us. The study reports, "Although it is common to disparage adherents of conspiracy theories as a delusional fringe of paranoid cranks, our data suggest that medical conspiracy theories are widely known, broadly endorsed, and highly predictive of many common health behaviors." And "high conspiracists" – people who believe three or more common theories – are less likely to "use sunscreen or get influenza shots or annual checkups," and more likely to use herbal supplements.

We all need to have agency over our own healthcare – and traditional medical practitioners are wise to work with patients to come up with complementary and alternative medicine plans that are in the best and safest interests of everybody. We don't have to swallow every press release for every new alleged miracle big pharma drug. But these persistent and unfounded theories are driving a perpetually booming snake oil business that peddles unregulated and dangerous "cures," and it's leading to a frightening return of diseases that were once all but eradicated. Got measles? Thank an anti-vaxxer. And remember that while not every doctor is trustworthy, ignorance and fear are indisputably bad for your health.