White guys still don't get it: This is the real reason they dominate TV

Institutional sexism explains why the media is dominated by white men. Here's how we start fixing it 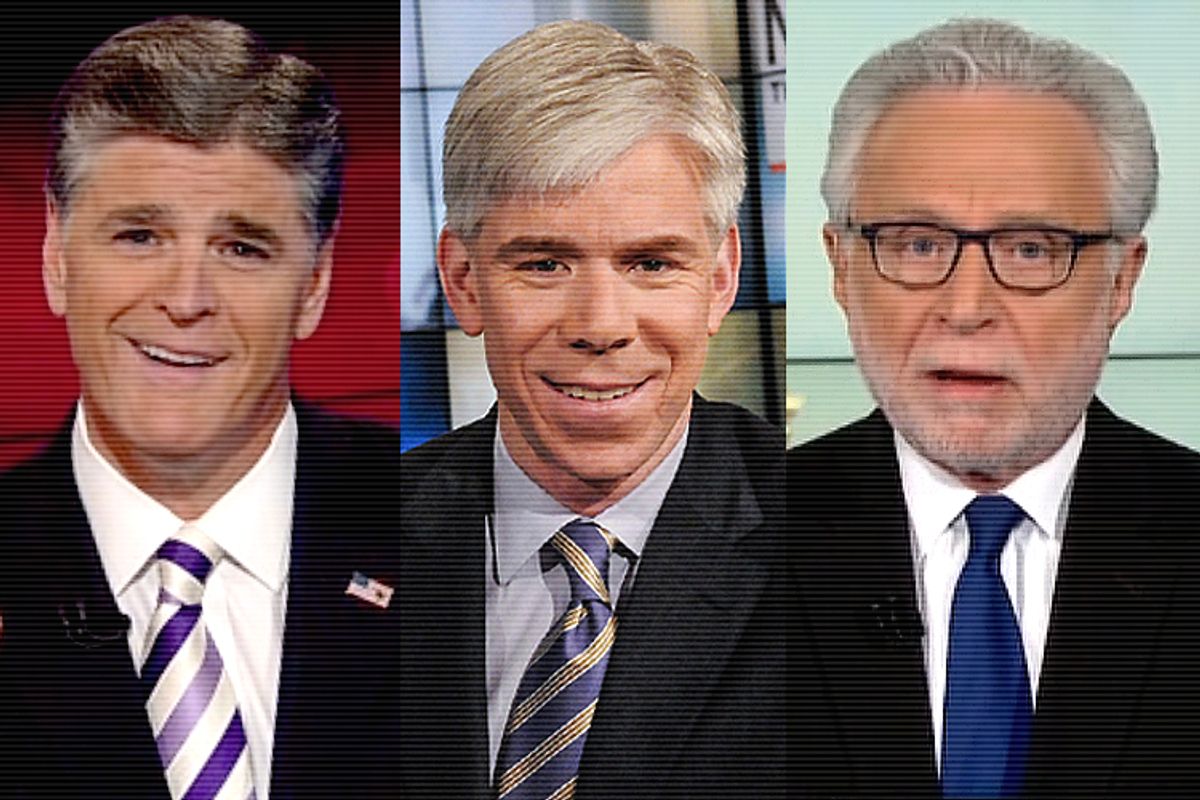 This week, Steve Paikin, host of a Canadian TV program called "The Agenda," publicly asked, “Why Won’t the Women Come On Our Show?” What ensued, among some straight-faced suggestions, was a biting, often funny hashtag conversation on Twitter, #WomenOnlyExcusesForPaikin, mocking Paikin’s descriptions of the reasons women give for not showing up when asked.

Paikin’s question actually had two parts. One, why do women decline to come on the air? Two, why does it seem as though there are comparatively few women experts available, even in 2014? Let’s assume that these two premises accurately reflect the parameters of the problem for a moment, since these two points recur with exasperating and dulling regularity.

First, why would there be fewer women available when asked? Working women do still have less time and make less money, so showing up to engage in punditry has to be worth it.  Structural issues continue to mean that women are still doing most of our unpaid work and making less than their male peers for paid work. Television appearances often take place in the evenings and on weekends and are not such an attractive option when you have less time and do not have consistent childcare that you can depend on.

Additionally, while maybe not the case for Paikin's show, many appearances are unpaid, and that is a disincentive for those of us making decisions about how to make our efforts financially productive.

Recently, I was part of a group that had to invite speakers to participate in an event. There was no budget, so we had to eliminate the younger, more diverse candidates, more than half of whom were women, because they needed to have their expenses covered and, ideally, be paid for speaking. That meant we were left with the typical TV talk show guest that Paikin describes: older, white men for whom the need to be paid was not pressing.

Additionally relevant to that cohort is childcare. Women, especially older women who would have traditionally recognized expertise in a subject, are more likely to be mothers who, in general, don’t have wives at home, unlike many of their male peers with seniority. Consider this: Of the Fortune 1,000 companies only 14.3 percent have female board members. Senior people managing boards, businesses and companies are overwhelmingly men (84 percent). A survey of 1,200 executives revealed that 75 percent of the men had stay-at-home wives. This is the corporate world, but I would bet a lot of money that other industries and sectors have similar numbers in the “expert” category.

This is why Paikin was roundly made fun of for saying: “We have also discovered there also seems to be something in women's DNA that makes them harder to book.  No man will ever say, 'Sorry, can't do your show tonight, I'm taking care of my kids.' The man will find someone to take care of his kids so he can appear on a TV show.  Women use that excuse on us all the time.” As was waggishly pointed out last night, “Excuses? They’re called reasons.”  This has nothing to do with women’s DNA and everything to do with the invisibility of care work in our calculations of GDP.

Second, expertise. What is it and who has it? Expertise comes from experience and tenure, and women’s ability to develop both is frequently and systemically constrained by workplace dynamics that remain stubbornly tied to the idea, in defiance of reality, that the ideal worker is a man with a wife at home. This is not because we are not able or ambitious, but because, by and large, men are rewarded with more pay, promotion and credibility when they have children and the opposite happens to women.  Women’s responsibility for care also means they work part-time more and are inhibited from accruing tenure and … expertise.

These facts are what’re called the Motherhood Penalty and the Fatherhood Bonus, both extensively documented. They have real and tangible effects not only on time, but also on the definition, recognition and development of expertise.

Subject expertise is also affected by stereotypes, implicit bias and stereotype threats that feed our sex-segregated workforce. Paikin explains, for example that “90 percent of economists are men. So already you're fishing in a lake where the odds are stacked against you.  And unfortunately, it's the same for foreign affairs, politicians, the sciences, labour issues, and the list goes on.”

Men and women continue to aggregate in gender specific fields. Even when women enter higher-status, male-dominated sectors, there are consistent, well-documented biases in hiring and promotion that affect women’s ability to become recognized experts. There is nothing that one television show can do to change this situation. There are, however, women experts in virtually every field today. It means doing the harder work of finding them if they are not part of your go-to network.

Paikin goes on to touch on a gendered confidence gap, without remarking on its meaning. “No man will say, 'Sorry can't do your show tonight, I'm not an expert in that particular aspect of the story.'"  The fact that men can and do “get up to speed on the issue and come on” doesn’t actually make them experts – it only proves that they have confidence in themselves and believe others will too.

It’s not just a matter of self-perception, however.  Women are expected to prove their qualifications and have more of them. We need more qualifications in order to be paid fairly and to succeed. Men do not feel the same pressure to prove their expertise because they don’t have to. They are still able to wake up, look in the mirror and feel perfectly confident talking about virtually anything.  It’s a likely and predictable effect of seeing yourself pervasively represented in culture as competent, able and powerful. There is a reason why only young white boys experience a surge of self-esteem when they watch television.  Girls and women do not, as a rule, derive a message of cultural power from the moment they are born, so we overcompensate and second-guess ourselves.

Lastly, without seeming to consider in detail the factors above, Paikin followed up with this tweet: “is it possible women just don't want to be on TV as much? possible???” Ah -- choice -- just like unequal pay, right?

Here’s one additional reality that hasn’t sunk in for many well-intentioned people in media: Free expression in the public sphere involves more risk for women and the traditionally marginalized than for most men on television and those writing Op-Eds.  This is no less true today than it’s ever been. Indeed, because of the amplifying nature of the Internet, and our distinctly unempathetic free speech norms, it can be worse.  Women who express their opinions publicly are often excoriated in sexist and gender essentializing ways.

Critiques of our opinions more frequently hinge on our sex’s perceived deficiencies than on the quality of our ideas.  Additionally, we are frequently harassed and violently threatened. This reality has a suppressive effect that not many people are that interested in considering. I know many able and ambitious women who shy away from greater public exposure because they do not want to deal with rape and death threats and do not want to put their families at risk. It is entirely possible that many women censor themselves way before television appearances become an option.

Having said all of this, however,  and while acknowledging that these reasons probably narrow the available pool of women, I don't think these are the primary reasons media remains stubbornly not diverse. Most women I know who are working and interested in media work, with or without children, go out of their way to make themselves available for television and radio appearances when asked. If we can’t, we often recommend another woman in our place because we are many of us very aware of this imbalance and, for the most part, really want to rectify it.  Which brings us to what Paikin did not address directly or indirectly: a structural issue not mentioned above, namely, staffing, resources and institutional commitment.

Paikin’s show’s staff does not appear to be especially diverse. Additionally, while they’ve talked about this problem, are committed to gender parity and have asked around to find women experts, "The Agenda" does not appear to have a systematic plan for increasing the presence of non-traditional voices. Paikin makes clear its goal of gender parity and describes the show's efforts. However, the lack of staff diversity ultimately undermines the stated commitment because these two things go hand in hand.  If programs are genuinely interested in diversity and gender parity, then they have to reflect this interest in their own organization’s makeup. The staff on "The Agenda’s" webpage lists 14 people, three of whom are women. I don’t like making assumptions about people’s race or ethnicity based on how they look, but this is not a particularly diverse looking group from that perspective, either.

There are three steps institutions can take to rectify these imbalances:

1. Talk to organizations and programs that are succeeding in achieving gender parity and diversity. This doesn’t have to be limited to television shows. After annual VIDA counts highlighted deplorable gender gaps at their organizations both the Paris Review and the New York Times Book Review implemented substantive changes. They are examples of how awareness moves to concerted effort and quickly effects change. Or, talk to producers at the "Melissa Harris-Perry Show," which single-handedly has more diversity that all other Sunday morning talk shows combined.

2.  In the short term, build new networks, the ones outside of traditional comfort zones, in order to expand reach in finding contributors. There are formal organizations like SheSource and the OpEd Project dedicated to developing and helping others find women experts and increase diversity of voices in media.  Reach out to TheLi.st and understand what #changetheratio efforts are about.  SheSource, a project of the Women’s Media Center, has more than 750 media-experienced women experts and an ever-expanding roster of women.  Likewise, in the U.K., the Women’s Room is an excellent source. In Canada, DiverseCity Voices was founded to do the same thing. These are just a few options; there is no shortage of structured professional networks of women that media bookers should have on autodial.

3. Most important, have a benchmarkable, long-term plan, create policies and dedicate resources. It takes people, time and money to solve this problem. Train staff to understand implicit bias and how it works in language, outreach, hiring and promotion. Shani Hilton, BuzzFeed’s deputy editor-in-chief, recently wrote a terrific piece about this, "Building a Diverse Newsroom Is Work."

Paikin’s interest seems genuine, but organizations committed to change, frankly, aren’t making open appeals for ideas on Twitter. We know what is effective. People with influence, power and real desire for equitable change have to do the hard work of making it happen.  Can we please put this question to rest now and ask instead, “What is your plan to make a difference?”