The venerable Sunday show is no longer a ratings powerhouse, and NBC's response is to make more Web videos 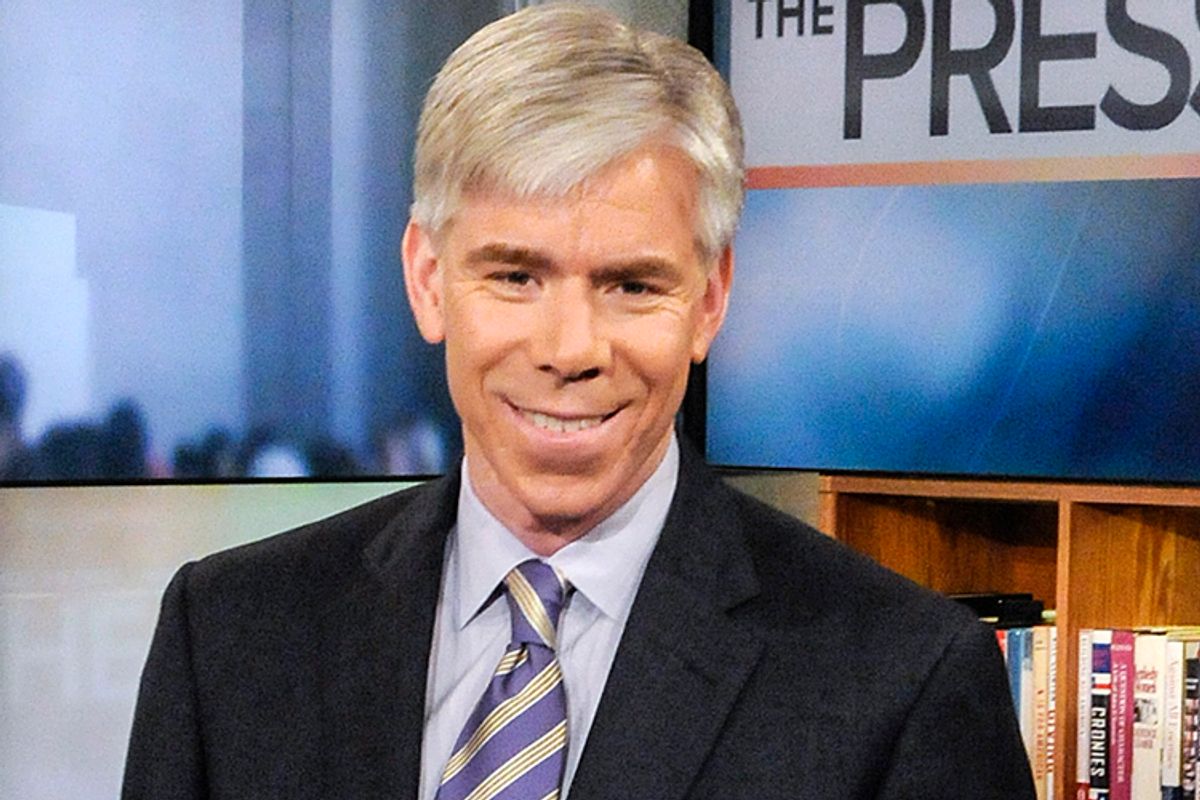 NBC's "Meet the Press" is in trouble. After dominating the Sunday morning ratings war for decades, it has lately faltered, coming in third in the fourth quarter of 2013. Critics and media writers think host David Gregory ought to be replaced. But NBC executives, according to Michael Calderone, are sticking with Gregory. "We're doubling down on David Gregory right now," says NBC News senior vice president Alex Wallace. (Wallace may not understand that the phrase "double down" refers to knowingly making a high-risk bet. If that's the case, she is not alone.)

While they are sticking with Gregory, NBC executives are not too proud to make some desperate grabs for a younger audience. Millions of people still watch the Sunday shows, but few of those viewers are under the age of 55. Network news executives and producers are keen to reach a younger demographic, but unwilling to make some of the more radical changes -- like having a non-idiot host and not inviting John McCain on every goddamn week -- that may attract a more youthful audience. Instead, NBC's gambit is having David Gregory do additional interviews and panel discussions to be aired on "the Internet," a global computer network known to be popular with the non-retired set. To emphasize that he is, as the kids say, "with it," Gregory will sometimes not wear a tie.

Gregory has long done web-only interviews ("Press Pass") for the "Meet the Press 24/7" page, and has been conducting interviews over Twitter ("Tweet the Press") in the past few months. On Thursday, NBC News launched "Meet the Press Express," a mid-week digital video series, hosted by Gregory, which features a rotating group of journalists from the network's Washington bureau.

In a play on the NCAA tournament, Gregory, sans tie, spoke with Roll Call's Christina Bellantoni, The Atlantic's Molly Ball, and the Washington Post's Wesley Lowery about their political brackets, and the group sized up the futures of key political players. The "Meet the Press Express" discussions are expected to be more casual than the Sunday roundtable and to feature a younger generation of political journalists who may someday appear on the television show alongside, say, New York Times columnist Tom Friedman or historian Doris Kearns Goodwin.

Brackets ... but for politics? That's just the sort of outside-the-box approach to political analysis that appeals to a guy like me, an 18-54-year-old male consumer.

All the network Sunday shows, "Meet the Press" included, are notorious for their conservative (in every sense of the word) booking choices. Old, white center-right men dominate the interviews and panels, with the same few faces appearing again and again. So it's nice to hear that "Meet the Press" will finally feature some younger, fresher voices. But ... only on the Web, apparently. Because they are, in some sense, auditioning to be allowed to sit at the Sunday morning grown-ups table with respected elders like Bill Kristol.

But "Meet the Press" is not losing viewers to "Face the Nation" and "This Week" because those shows skew younger -- Bob Scheiffer is no one's idea of a teen idol and those shows have nearly identical booking practices. "Meet the Press" is declining because it's not the definitive version of its thing -- the Sunday morning political chat show -- anymore, and its competitors offer essentially the exact same product, giving no one a reason to remain loyal to one over the others.

So I will give NBC some credit. The solution is not to replace Gregory with someone like Chuck Todd, the human incarnation of the odious phrase "politics junkie." That show would be largely the same. Instead, the network will apparently allow Gregory to continue to guide "Meet the Press" toward its inevitable, long-overdue demise. Which is fine! If there has to be a "Meet the Press" I'd prefer a good one to the current bad one, but there doesn't actually have to be a "Meet the Press."