We're all told we're "Divergent," all the time -- behind the bogus dystopia lies a panegyric to consumer society 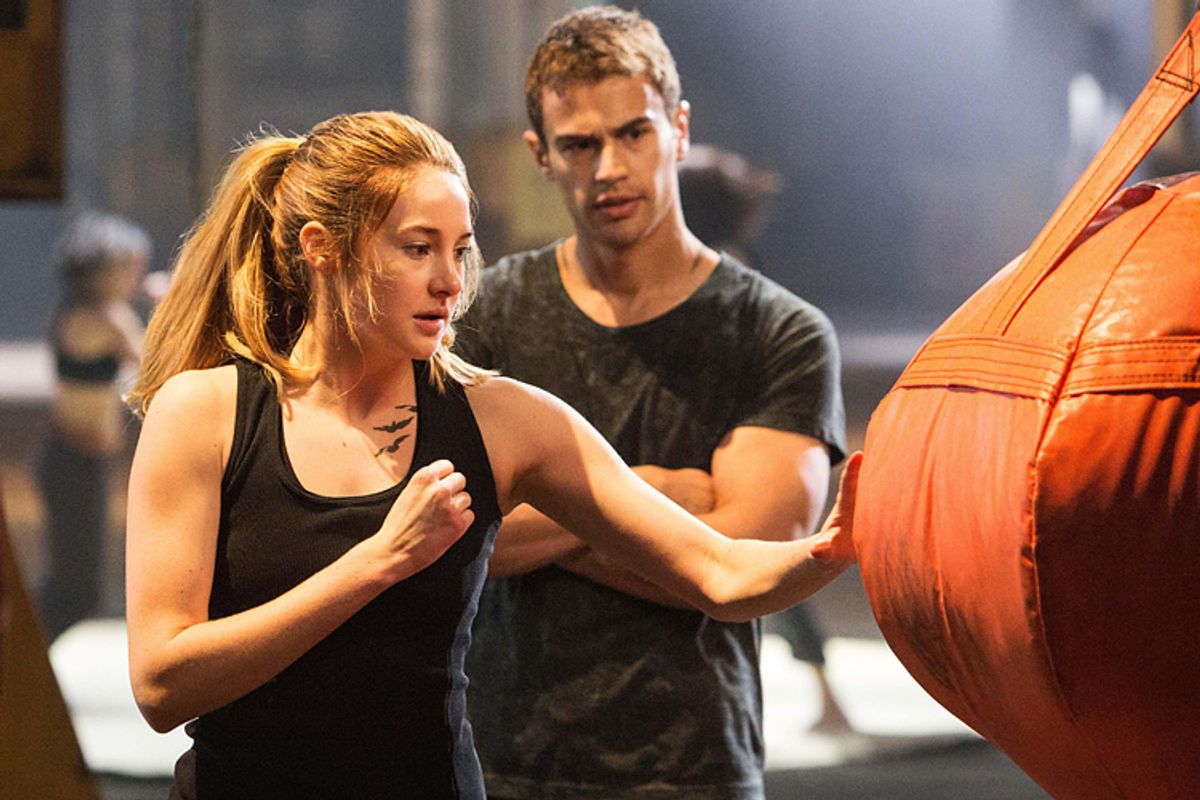 “Divergent” follows in the footsteps of “The Hunger Games” in a number of obvious ways: It’s an expensive action movie with a female hero and a romantic subplot, set in a dystopian future society and based on a series of popular young-adult novels. Its star, 22-year-old Shailene Woodley, has been groomed and selected over the past couple of years to stand alongside “Hunger Games” lead Jennifer Lawrence in a new Hollywood firmament of youth, an important consideration for a business that now sees itself dangerously tethered to a cluster of middle-aged stars. That’s the context for the analysis I’m expected to provide: a mixture of industry-savvy “let’s not forget this is a business,” some reified male-gaze mooning about Woodley’s limpid hazel eyes and lustrous brown hair, and some pretense of suspending disbelief when it comes to this recycled Teens vs. The Man adventure yarn. Well, screw that.

Instead, I’d rather go beneath the surface to look at the structural function of these stories – the role they play in the cultural economy – where I think we can identify even more intriguing similarities. Both “Divergent” and “The Hunger Games” are fundamentally works of propaganda disguised as fantasy or science fiction. They’re not propaganda on behalf of the left or the right, exactly, or at least not the way we generally use those words in America. They are propaganda for the ethos of individualism, the central ideology of consumer capitalism, which also undergirds both major political parties and almost all American public discourse. It’s an ideology that transcends notions of left and right and permeates the entire atmosphere with the seeming naturalness of oxygen in the air. But at least if we acknowledge that it is an ideology, we can begin to understand that it limits political action and political debate, and restricts the heated warfare between Democrats and Republicans to a narrow stretch of policy terrain.

To begin with, if we accept the maxim that all fictional works about the imagined future are really about the present, what do these works have to say? They contain no intelligible level of social critique or social satire, as “1984” or “The Matrix” do, since the worlds they depict bear no relationship to any real or proposed society. Where, in the contemporary West, do we encounter the overtly fascistic forces of lockstep conformity, social segregation and workplace regimentation seen in these stories? I’m not asking whether these things exist, or could exist, I’m asking where we encounter them as ideology, as positive models for living.

In the world modeled by Apple and Facebook and Google, the answer is pretty much nowhere. The organization-man stereotype is universally mocked, from corporate boardrooms to political debates to beer commercials. They serve the function Emmanuel Goldberg served for Big Brother. Every CEO who’s spent decades in the executive suite is told he must rebrand himself as a maverick; the entire drama of the 2012 election involved Mitt Romney’s hilarious efforts to make himself look like an outsider. Every right-thinking person in our age knows her survival depends on her self-branding; we are all meant to be entrepreneurs, innovators, rebels, free spirits. The insistent theme of the consumerist economy is that we are all “divergent,” the cool-sounding label that renders Woodley’s character an outcast, and that the mechanism of the market is calibrated to thrum to our unique personal frequency.

So, no, the oppressive future societies depicted in “Divergent” and “The Hunger Games” are not allegorical representations of the present, whatever Tea Partyers may tell you. (Please observe: I am not saying there is no danger of fascism in America. But it will come in a prettier package.) Rather, they are exaggerated frames placed around works of social praise, or panegyric, to use the Athenian term, works designed to remind us how grateful we should be to live in a society where we can be “ourselves,” where we can enjoy unspecified and entirely vague freedoms. In both cases, this message arrives entangled with the symbolism of female empowerment, which lends a contemporary flavor and makes the pill go down easier. Whether that makes the pseudo-feminism of these stories an integral part of that message I’m not sure, but there’s little doubt that over its history feminism – once conceived as a social or communitarian philosophy – has acclimated itself to the individualist world order.

I’ve already observed that the politics of Katniss Everdeen’s struggle against the effete and decadent elite of the Capital in the “Hunger Games” series are impossibly vague, as if designed to allow both left-wing anarchists and right-wing black-helicopter paranoids to sign on. (Indeed, there’s a vigorous strain of fandom convinced that Suzanne Collins’ books and the ensuing movies are a war cry against the Kenyan-Muslim dictatorship.) In “Divergent,” based on the first in a series of books by Veronica Roth, we encounter an even dumber version of the stripped-down, post-apocalyptic society. Let’s pause for a moment, in fact, to notice that this kind of story almost always imagines a future world that’s far simpler than the one we currently live in, one in which all the stuff and clutter of our lives – the screens, the gizmos, the cars, the noise – has evaporated. As David Mamet once put it, every fear hides a wish.

“Divergent” is a film whose distinguishing characteristic is the lack of any distinguishing characteristics, a paean to the preciousness of the individual human being that consists entirely of replacement parts from other, better stories and pretty, anonymous-looking actors. I don’t know anything about Shailene Woodley as a person and do not much care; I thought she gave outstanding performances in both “The Descendants” and “The Spectacular Now.” For this role, she has been built up (most notably by a gossipy but substance-free Hollywood Reporter profile) into a “divergent” version of Jennifer Lawrence, with some hippie-radical lifestyle choices and a maybe-possibly bisexual or polyamorous love life. On-screen here as Tris, who is born as a member of the beige-clad “Abnegation” caste and tries to bluff her way into the gung-ho, stormtrooper-like “Dauntless” caste, Woodley projects a certain awkward teenage vulnerability that’s easy to like.

Now, just to fend off the “it’s only a movie” complaints, I do understand the way “Divergent” works internally. It’s basically a high school drama, with the stakes turned up to nuclear-threat level, and Tris’ anxiety is meant to stand for the anxiety of every young person who feels they don’t fit in, faced with others who seem certain of themselves. When Tris is revealed as “Divergent” – a mixture of several caste qualities, but conforming to none – she risks becoming a “factionless,” rootless and effectively homeless person. But the dark-browed dreamboat named Four (Theo James), her teacher and protector in stormtrooper boot camp, is Divergent too! And so is everybody else who’s remotely cool; it’s like “Freaks & Geeks,” except nowhere near as good and with poorly choreographed fight scenes.

But there’s no contradiction between the two levels of narrative meaning in “Divergent”: The reassuring message about the value of not being “normal,” delivered by the most normal-looking, generic character imaginable, works on both. When we convince ourselves that “Divergent” or “The Hunger Games” contains any sort of lesson about resisting authority or speaking truth to power, we have already accepted their central premise that personal liberty, as defined by contemporary capitalism, is a precious virtue and that it might someday be under threat from somebody, somewhere. The villainous daddy-state presided over by Donald Sutherland (in "Hunger Games") and Kate Winslet (in "Divergent") is as much a paper tiger as the corrupt old regime of landlords and kulaks seen in Soviet boy-girl-tractor romances of the 1930s. The model of individualism presented as so noble and so embattled in these oxygen-propaganda movies is in fact the authoritarian ideology of our time, the instrument used by the 1 percent to drive down wages, dominate and distort the political process and make all attempts at collective action by those below look stodgy, embarrassing and futile.