The climate crisis demands bold action from our leading institutions. Too bad they're all falling down on the job 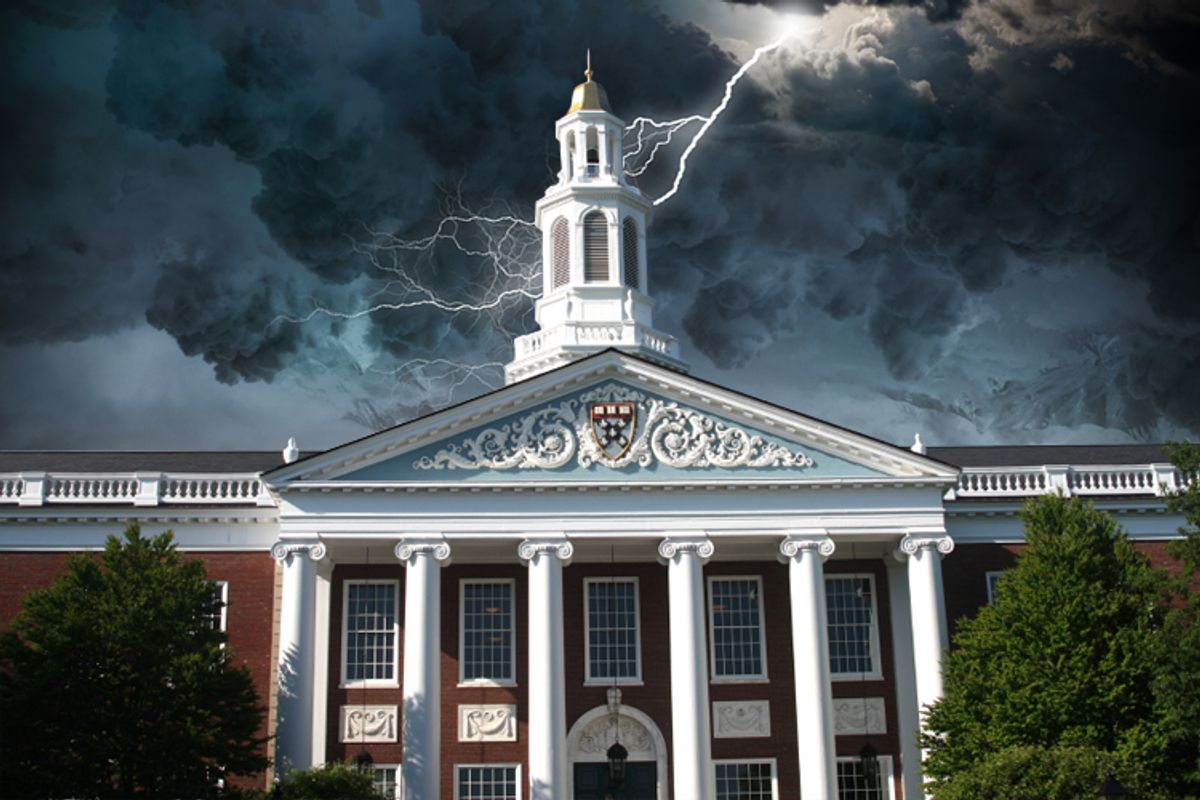 When faced with intractable problems, we often make up stories to console ourselves. The boat’s not really sinking, we say: We’re just going through a rough patch. We’re not headed for disaster; we’ve just been blown off course. Better to keep a bright outlook on things, we presume, than to acknowledge our desperate situation.

This sort of hopeful self-deception was on exhibit three weeks ago at Harvard University, where a student activist confronted the university’s president, Drew Faust, over the school's decision not to divest of its financial stake in fossil fuels. When the student pointed out to Faust that the beneficiaries of those investments actively obstruct efforts to move toward a clean energy future, a bristling Faust replied bluntly: “That is not the case."

And it looks for all the world like she believes it.

Faust's denial of acknowledged facts, and her pained attempts to backpedal, are alarming. But they are also typical of our leaders' myopia regarding the political battle over climate change. Even our most progressive politicians and institutions are reluctant to connect the dots, despite the fact that we’ve known for years how the oil industry peddles fake science, stacks Congress with climate skeptics, and lobbies for the suppression of renewable energy — all while receiving massive subsidies for its own dirty fuels. The interest of the ExxonMobils and Shells of the world in a carbon-consuming future is obvious. For them, sabotaging our chance at a healthy energy future is just part of doing business.

Our leaders are not blind to these efforts, nor to the role that corporations play in our civil life. Indeed, the evidence is clear: The oil-backed Bush administration's distortion of climate science was well-publicized, and reports like Naomi Oreskes and Erik Conway’s "Merchants of Doubt" detailed the industry's decades-long war on clean energy alternatives. However, among the Drew Fausts of the world, antagonism to fossil fuels is still considered an unrealistic, fringe position.

Denial is not so much about a failure to recognize facts as it is a reluctance to do anything about them. The presidency of Harvard, like the federal judiciary or the halls of Congress, is a powerful position. When you’ve worked hard enough to get to places like that, you hope that you’ll be able to make a difference. But some differences are tougher to make than others. If you admit that the fossil-fuel industry stands in the way of a healthy future, then you have a duty as a leader to do something about it. That would require commitment, sacrifice and a willingness to change the way we live. So Faust and the powerful people like her quite naturally find it easier to deny what’s before their very eyes.

In "Nature's Trust," environmental law professor Mary Wood examines how this feckless attitude has overtaken those charged with protecting our natural resources.

For example, our judges -- afraid of corporate actors crying “judicial activism” -- defer to the state and federal agencies charged with regulating the environment. But these agencies often suffer from serious conflicts of interest born of the revolving door syndrome. (This was evidenced by the recent revelations that North Carolina's Department of Environment and Natural Resources had followed Duke Energy's marching orders in blocking environmentalists from a meeting over water pollution charges.) And even if the agencies have the will to resist Big Oil's lobbying prowess and mystificating fake science, they lack the resources to do so. (The EPA, for one, relies on corporate-funded groups like the American Chemistry Council to provide research into the dangers of those very groups' products.)

Our elected politicians are even less likely to address the clear political aspects of the climate change problem. Facing the frightful campaign spending power of oil interests like the Koch brothers, and besieged on Capitol Hill by a lobbying machine that spends nearly half a million dollars each day, our congresspeople equate discussion of Big Oil's malfeasance with career suicide. So don't rock the boat, they say. Maybe it's not as bad as it looks.

It looks pretty bad: The fossil-fuel industry was instrumental in the mid-20th century remaking American life in the image of the automobile and the open road, tying us all to a lifestyle of inflated gas consumption; it helped shape our foreign policy to protect its resources overseas, sending us into ill-fated wars for profit; and it was methodical in building the aforementioned lobbying machine that guarantees $59 of subsidies for every dollar it spends in Washington.

The failure to acknowledge such facts follows a familiar logic. Because we all consume fossil fuels, we feel guilty about blaming Big Oil: We sense that it’s somehow unfair to target companies that simply sell a product we need. And we tell ourselves that even if we weren’t complicit, we’d still be powerless to do anything: We’re addicted to carbon, and we always will be. This type of reasoning is behind the recent State Department report on the Keystone XL Pipeline. Sure, it’s really bad for us, the report says, but the carbon’s going to get into the atmosphere anyway. Powerlessness, rather than ignorance or shame, becomes the final justification for inaction.

But as soon as we open our eyes and admit what’s before us, we see that our complicity and powerlessness are myths. The fossil fuel industry uses its enormous influence to prevent interference with its harmful activities, but we need not buy its inflated claims of self-importance. After all, the solutions to our carbon addiction are well known. Stop the subsidies. Use the savings for renewable energy infrastructure and for investing in green technology research and consumption-cutting policies. Cap emissions and spread tax and fee revenue to those most vulnerable to a sudden change in energy practices. Reimagine the design of our economy and our cities. Even simpler, something we could do tomorrow: Stop mining coal.

Every day we refuse to act, we are living in a prison of our own making. Big Oil might be our jailer, feeding our addiction as it lines its pockets. But to escape we just need to look up and acknowledge where we stand. The door is wide open: All we have to do is walk through.

“All well and good,” our reluctant judges, regulators, politicians and university presidents might respond. “But this is hardly realistic. If we want to kick our addiction to fossil fuels without hurting lots of people, we’ll have to move slowly. We’ll have to take time to develop new technologies, to develop new practices. And we’ll need Big Oil to help with that.”

This type of pragmatic pessimism, convincing enough on its surface, is hardly compelling once we admit that our carbon culture is no mere accident of history nor an unfortunate byproduct of industrialization. We know that the oil industry and its allies went to great lengths to kill renewable energy in the 1970s. We know about their efforts to manufacture consumer demand for SUVs and their undermining of public transportation and rational urban planning in favor of personal automobiles and sprawl. Yet for all that social tinkering, the Treasury Department estimates that cutting off industry subsidies would have little effect on gas prices. In other words, we can afford to stop paying the bully.

The obvious upshot of this history is that we’re not so trapped after all, that there always were and always are other paths. The furious spending by the fossil fuel industry to fabricate science and to obfuscate climate truths is the final proof that it is an industry whose products are a contingent necessity, that we can go another way. Why would carbon corporations worry so much about maintaining our addiction if there weren’t good alternatives? Once we remove the dissembling and dependence-inducing influence of Big Oil from the energy picture, and once we make better use of our misdirected public resources (anywhere from $10 billion to $52 billion in annual subsidies, depending on whether you take into account defense expenditures), there’s no reason to think that a greener future is not imminently attainable.

Like her peers, Faust is invested in the status quo. But when you lead an institution whose motto, “Veritas,” is Latin for “truth,” you have a special responsibility to address the damaging illusions of our most powerful corporate actors. Faust has a special opportunity, too: She should heed the demands of a majority of her students and recommend that her university divest from the fossil fuel industry that has done so much harm to the ideals for which her institution is purported to stand. Such a move would acknowledge that we are not trapped, that we can always walk through the jail door, and that no amount of lies or fear-mongering will coerce us into shame or inaction.

Should Faust choose to recognize these truths and to act on them, her stand would be a first step toward rendering the impossible possible. Passive judges, agency heads and legislators would take note. Our self-imposed code of silence would begin to break down. Change never happens without opening your eyes and taking responsibility for what you see: We have the power to craft a greener future, and we have the means. All we need now is the will.

And that, no matter what the fossil fuel industry tells us, is the case.

Ted Hamilton is a student at Harvard Law School.