Sorry, Memphis -- the real birthplace of rock music is a battlefield in Crimea. Care about the Ukraine crisis now? 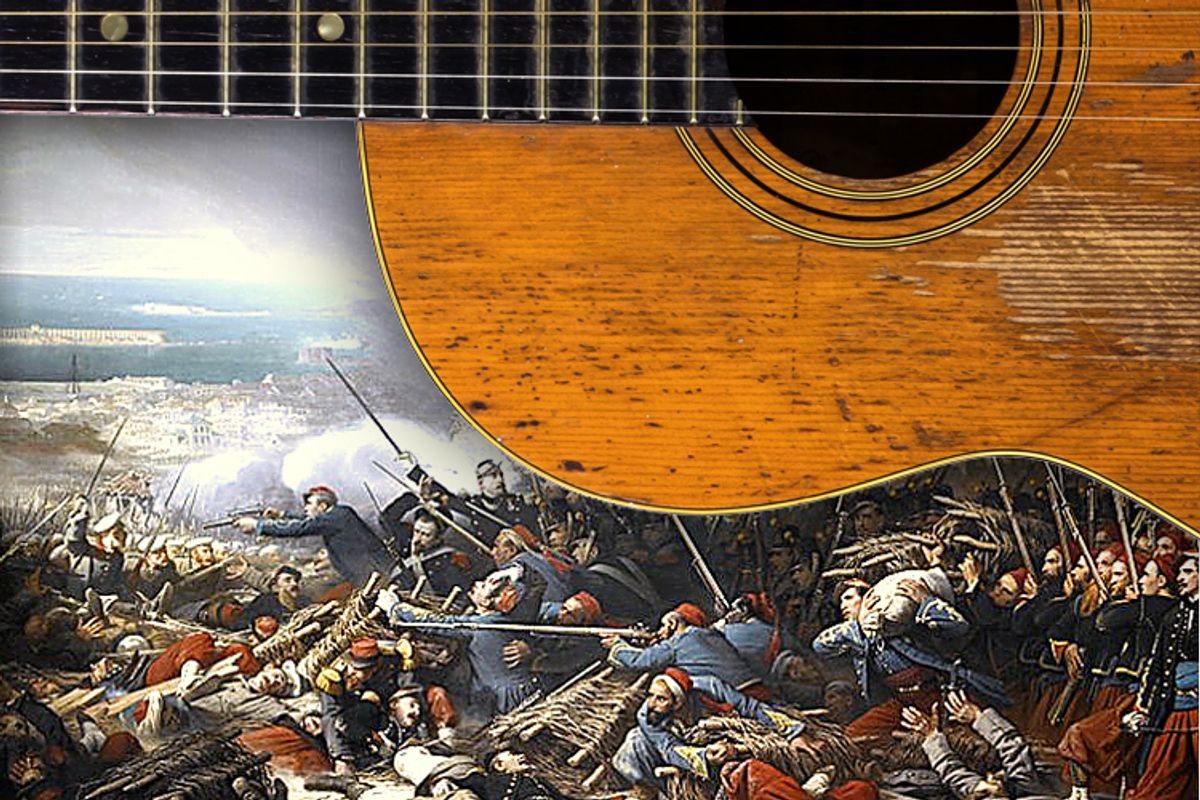 Earlier this month, Eugene Hütz of Gogol Bordello slapped a sticker on his acoustic guitar that declared his native Ukraine, “not an outskirt but a center.” As guitar statements go, it’s not exactly Woody Guthrie’s “This machine kills fascists.” More noteworthy than the message is the use of a six-string to address an international crisis centered on Crimea. Hütz may not know it, but his band, and every other band that draws on American popular music, owes its sound to a cultural collision set in motion by the first Crimean War. Follow the bloodlines of rock 'n' roll back through the mists, and you’ll find yourself passing through Memphis recording studios, one-room Mississippi shacks and, finally, standing on the corpse-strewn urban battlefields of the Siege of Sevastopol.

The Crimean War is often cited as the first war reported by telegraph and photograph. Less remembered is the momentous impact that reportage had on an Ohio music teacher named Henry Worrall. Together with the rest of the country, Worrall was gripped by daily newspaper reports of the bloody Siege of Sevastopol, where Russian troops held the line against a three-nation onslaught for a year before abandoning the seaport.

At the time of the siege, Worrall was composing music and teaching guitar at the Ohio Women’s College. He made extra cash publishing some of the first popular instructional booklets for guitar, with names like Worrall’s Guitar School and the Eclectic Guitar Instructor. His target audience wasn’t teenage boys, but young women of means who entertained company with waltzes and other European styles on small acoustic instruments known as “parlor” guitars.

Images from the Siege of Sebastopol (as it was then spelled) continued to haunt Worrall after the war’s end in 1855. The year after Russia’s surrender, he wrote a tune inspired by the conflict.  He called it, “Sebastopol: A descriptive fantaisie for the guitar.” It was a simple piece meant to evoke a military march, with few chords and a sprightful melody played on two strings. Crucially, the song was written in the tuning of open D, meaning that merely hitting the open strings produced the bright music of a D Major chord.

“Sebastopol” was a hit. Constantly in print, it sold steadily to become one the century’s bestselling pieces of sheet music. Sometime during the presidency of Ulysses S. Grant, it also became the standard starting point for learning guitar — the “Stairway to Heaven” of the Gilded Age. If a person began playing in 1870 or 1890, he likely spent his first lessons with Worrall’s ode to the Crimean War dead, or learned from someone who did. As the short piece introduced a generation of Americans to open D, people started calling the tuning “Sebastopol.” Before long, the first syllable dropped out and the tuning acquired the nickname it has today: Vestapol.

In 1860, when Worrall officially trademarked “Sebastopol,” he also filed another of his parlor compositions, an arrangement of the standard “Spanish Fandago.” This song was played in the tuning of open G. It, too, was a hit. Publishers often bundled the two compositions in a small book of sheet music, demand for which never flagged. It was their runaway popularity, in particular the one inspired by the Crimean War, that disseminated open tunings to far-flung parts of the country, including the Mississippi Delta. In the early years of the 20th century, musically minded travelers encountered open D and G as the defining tunings of what we today call Delta blues. This folk music of the American South, first observed by W.C. Handy at a Mississippi train station in 1903, also bore the fingerprints of “Sebastopol” in its chords and fingerpicking patterns.

Nobody knows exactly when or how "Sebastopol" worked its way through the cabin porches, picnic grounds and work-fields of the Deep South. There’s no crater marking the landing of the meteor. But the meteor did land, carrying DNA that changed the course of popular music from Kansas City to Kiev.

Musicologists believe that in the years after the Civil War, Worrall’s popular parlor compositions collided with the African-influenced traditions of Southern sharecroppers who could afford the new cheap guitars hitting market. “When guitars began to be widely distributed by mail order in the 1890s, they came complete with little tutor books,” writes the guitar journalist and blues historian Jas Obrecht. “[They] almost invariably included versions of ‘Sebastopol’ and ‘Spanish Fandango.’ These fairly simple pieces then would have been the starting point for thousands of rural players around the turn of the century.”

One of the players who adopted the tuning of “Sebastopol” was the east Texas slide guitar legend Blind Willie Johnson. If you watched the first episode of the rebooted "Cosmos," you heard Johnson’s mournfully transcendent open D masterpiece, “Dark Was the Night, Cold Was the Ground,” played during the scene showing the Voyager craft drifting beyond our solar system. Carl Sagan, who helped select the artifacts placed on the spacecraft, included Johnson’s song among the recordings etched into the space pod’s Golden Record.

The British guitarist John Renbourn has analyzed the crossover between Worrall’s parlor tunes and early blues and arrived at the same conclusion as Obrecht. “These old [parlor] pieces laid the foundation for the emerging blues and fingerpicking guitar styles,” writes Renbourn. “‘Sebastopol’ and ‘Spanish Fandango’ were both outstandingly popular solo pieces and their availability in print continued beyond the turn of the century. The connections are not limited to the [folk names of the open] tunings, they go on in terms of harmonic content and even specific right-hand patterns.”

These harmonies, tunings and patterns were rediscovered midcentury during a transatlantic Delta blues revival, and we all know what happened next. For this we can thank an antebellum parlor song written for solo guitar, inspired by Russian troops doing battle on the island of Crimea.