170,000 gallons of heavy oil are blocking a major shipping channel 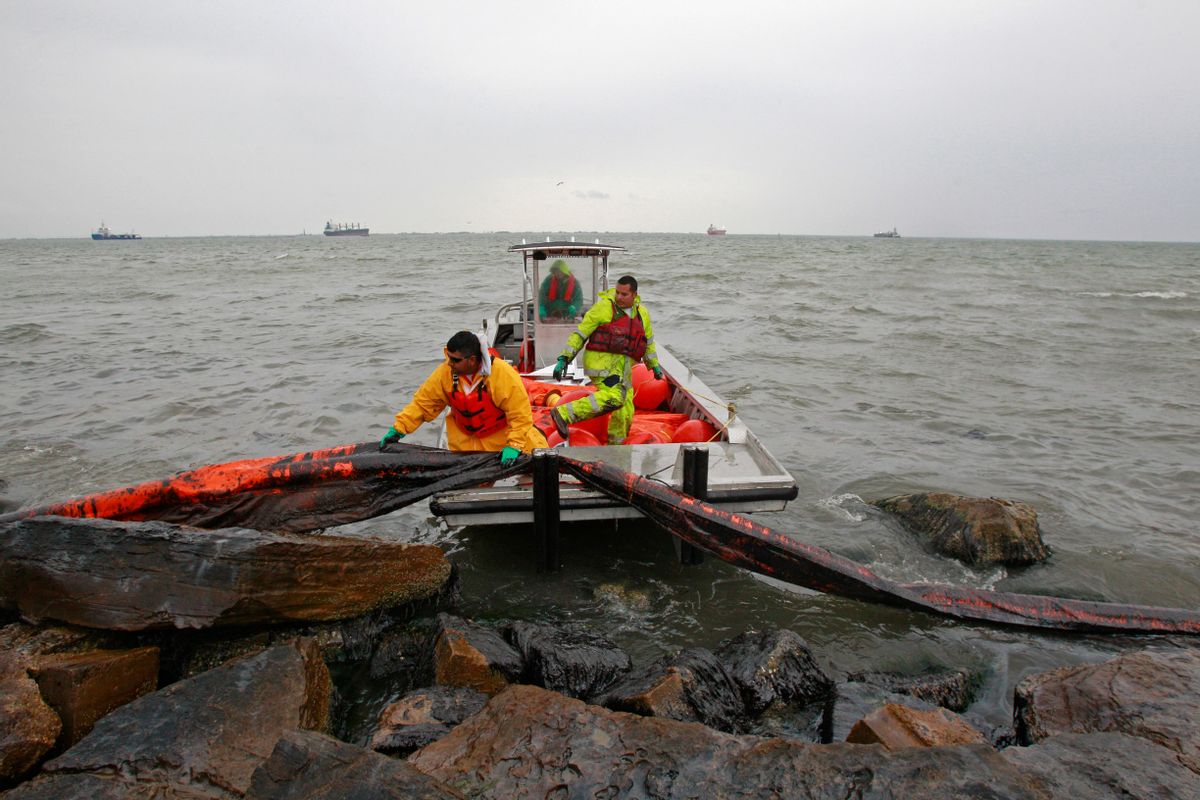 Workers try to move oil containment boom from the shore area along Boddeker Rd. on the Eastern end of Galveston near the ship channel Sunday, March 23, 2014, in Galveston. (AP Photo/Houston Chronicle, Melissa Phillip)
--

Reinforcements are being called in Monday to help contain the massive oil spill that dumped nearly 170,000 gallons of thick, tar-like oil into the Gulf of Mexico's Galveston Bay this weekend. The Associated Press reports:

A barge carrying about 900,000 gallons of the heavy oil collided with a ship Saturday in the busy Houston Ship Channel, spilling as much as a fifth of its cargo into one of the world's busiest waterways for moving petrochemicals, according to the Coast Guard.

Oil had been detected 12 miles offshore in the Gulf of Mexico by Sunday, and as many as 60 vessels were either waiting to get in or out. The Coast Guard - which called it a "significant spill" - said it expected to deploy more containment booms Monday, with 24 vessels working to skim the oil.

"The timing really couldn't be much worse since we're approaching the peak shorebird migration season," Richard Gibbons, conservation director of the Houston Audubon Society, told the AP As the spill occurred nearby a major bird habitat, added Tom Harvey, a spokesman for the Texas Parks and Wildlife Department, to the L.A. Times, “There could be hundreds or thousands of birds of various species in the area affected by the spill.” As of Sunday afternoon, however, fewer than 10 oiled birds had been discovered.

The timing adds an extra layer of resonance to the spill, as well: Monday marks the 25th anniversary of the Exxon Valdez spill, which unloaded nearly 10.8 million gallons of crude oil in Alaska's water -- the impacts of which are still being felt today. While smaller in scale, the impact of this newest disaster is already being felt: by the local economy; by marine life; and by the 60-some ships waiting to pass through the important shipping channel.