It isn't easy being twee: Why the Wes Anderson aesthetic is good for everyone

Sure, mock "Portlandia," Wes Anderson, the Smiths. But Morrissey's right: It takes strength to be gentle and kind 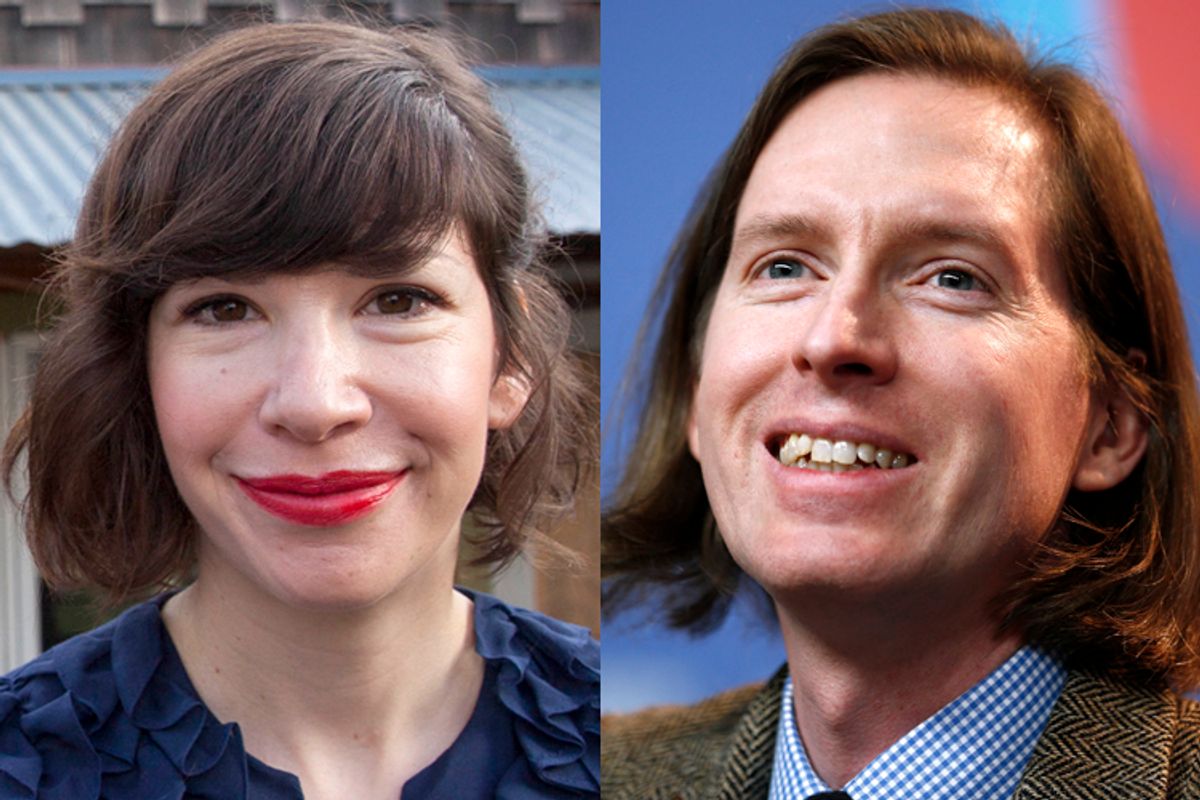 Whenever people asked me what my next book was about, I answered: “Twee.”  This mostly happened in loud bars.

“You know! Everything happening in Brooklyn.”

In 2011 it was quite possible that Twee only existed as a movement in my head. I was in my 40s. I didn’t get out as much as I used to. I’d only ever heard “twee” described as an adjective, almost never a noun. When I sold the book, people were still lumping those I saw as “twee” under that often maligned umbrella term “Hipster.” But Twees were not Hipsters.  Hipsters went out and did drugs and wore white belts. Twees, as I idealized, stayed in and wrote in their diaries (or on their blogs) and wore cardigans and listened to the Zombies, the Go-Betweens and Galaxie 500. They weren’t scruffy. They’d tamed the bushy, Hipster pornstache into a nifty, waxed and groomed thing of beauty. They also ate locally sourced  pickles and beer.  Most people hated them even more than Hipsters. It was becoming a problem.

“How do I convince someone to do an interview for a book when they suspect that their very inclusion in that book makes them, well, twee?”  I complained to my editor over cocktails in a West Village bar one night.  “Am I supposed to say, ‘Look, it’s OK, you’ll be in there with a lot of cool dead people like James Dean, Andy Kaufman and Charles M. Schulz”?

My editor agreed it was tricky but eventually, over vodkas, we put together a letter. It ran:  “For my next project, I’ve decided to attempt to define and contextualize one of the most durable and discussed youth movements of our modern age.  The ‘movement’ goes by many names, some of them pejorative … ‘fey’ and ‘twee.’”  Like it wasn’t me who was using the word, it was the others …

Twees, as I saw them, were souls with an almost incapacitating awareness of darkness, death and cruelty, who made the personal choice to focus on essential goodness and sweetness. They kept a tether to childhood and innocence and a tether to adulthood as is required by the politically and socially active.  They had a healthy interest in sex but also a healthy wariness and shyness when it came to the deed.  Where there was a wild lust, it was for knowledge, whether it meant the musical arrangements on or sequence of an album, the filmographies of supporting players in an old Truffaut or Hal Ashby film. What’s so terrible about that?  Sure, they all moved to Brooklyn and ruined it, but I lived in Brooklyn in 1992 and with full acknowledgment of those gentrified out of affordable housing, it wasn’t that great when it was dead empty and you could hear your footsteps echo on Bedford Avenue at 10 p.m.

I’d spent the summer of 2011 reading, screening DVDs and digging in crates (OK, on eBay) and filling legal pads with handwritten notes in an attempt to codify this Twee aesthetic and write a sort of cultural history.  Every biographer falls in love a little bit with his subject even if it’s not a statesman or David Bowie. So even as I strained to stay objective during the composition of my first draft,  I assembled an impressive collection of expensive Steiff toys, four wooly Lacoste cardigans and enough children’s books to start a library for orphans. And I began to draw parallels and connect my history.  “The real danger of a book of your kind,” the filmmaker Whit Stillman told me, “is that in order to make it a thesis you have to kind of reduce everything to a sameness – make it an alliance of all these elements when it isn’t.”  But the thing is, there was a sameness to 1936’s "Ferdinand the Bull" (read by many as an antiwar allegory) or 1996’s "If You’re Feeling Sinister" (a plea for gentleness during the tumult and drugginess of  the “Cool Britannia” of the Gallagher brothers). Maybe it was all part of a continuum, and each point on that continuum was in its own way a bold oddity. Besides, my ears didn’t lie.  I heard “After Hours” by the Velvet Underground in “Anyone Else but You,” the Moldy Peaches' improbable hit from the "Juno" soundtrack.  And if that wasn’t enough, there was an undeniable sameness to all of the touchstones that I was writing about: half the people hated them and those who didn’t would bleed defending them.  That June, the actress/singer Zooey Deschanel tweeted, “I wish everyone looked like a kitten,” and incurred a deluge of angry suspicion from half the population.   The other half … imagined kitten-world.

Deschanel, a veteran of some really dark films like "Winter Passing" and "The Good Girl," was owning her Twee in extreme, and leaving those shadows behind her in favor of a then untested Fox situation comedy (marketed at the time with the perhaps regrettable phrase “adorkable”).   I was still only halfway there.

But by the winter of 2012, as the book was finally coming together, things began to turn about.  I was booking interviews, two a week.

Deschanel’s show, "New Girl," ended up being more of a deft ensemble comedy in the vein of "Friends" (i.e., it didn’t suck). That helped. Each week, Vanity Fair’s website, VF Daily, where I was a contributor, would rate the episodes on a scale of “Adorkable” vs. “Tweepulsive,” and I remember thinking, “Well, at least they’re using the word.” Lena Dunham’s "Girls," which premiered that spring, offered a smart, feminist and unapologetically Twee entertainment, as did Tavi Gevinson’s Web magazine Rookie.  People started not only acknowledging their Twee, they were starting to own it too, and again, this was the key. The attention that a show like IFC’s "Portlandia" was then getting for throwing light on dozens of previously street-level Twee tropes and the fact that people were getting the jokes made me happy and relieved (as did the show itself, which is obviously wonderful).

Nobody, but nobody, however, has owned their Twee more than Wes Anderson.  When I first saw 2012’s "Moonrise Kingdom," I thought, “Oh, shit.   He’s doubling down.” It was as if Anderson was saying, to his critics, “You think that last one with the talking foxes was twee? Check this shit out.” Curiously, by not self-consciously backing off from his signature style, he got stronger and his films became deeper, not, as some critics claimed circa "The Life Aquatic … " and "The Darjeeling Limited," a bit shticky.  Like all Smiths songs, all Anderson films are in part about the decay of old-world beauty and tradition and the loss of youth (sic transit gloria!) but Anderson didn’t even bother with metaphor anymore. A literal storm was coming to threaten the blissful, pure childhood of "Moonrise Kingdom’s" two heroes, and it became his most successful film.  Sure, there were still haters. Bret Easton Ellis, newly emerged as Twitter’s greatest and most lethal culture critic, tweeted, “The ‘Moonrise Kingdom’ review in NYTimes is the whitest review I have ever read about the whitest movie ever made.” (Lena Dunham gushed, “Moonrise Kingdom couldn’t be more pleasurable.”) But Anderson, a towering, corduroy-draped giant, straddling the world, as far as I was concerned couldn’t even hear them for all the clouds and airplanes.

Standing in line the other day to see his new film, "The Grand Budapest Hotel," I have long since dispensed with my insecurity that there was perhaps no there there when it came to calling Twee a thing. I realized in that lobby that the opening of Anderson’s films are akin to when a new Marvel hero flick drops, those Avengers movies or a new Spider-Man. They are events. The films themselves are full of triggers (cameos by beloved Anderson collaborators like Owen Wilson and Bob Balaban, and of course Bill Murray), and signals to his devoted (“Rudeness is merely the expression of fear,” one character declares in Budapest). It reminded me of that line in the Smiths’ "I Know It’s Over," where Morrissey sings, “It’s so easy to laugh, it’s so easy to hate. It takes strength to be gentle and kind.” Morrissey, there was another giant who owned his Twee, and never sold it out.  Many believe we need their example now, perhaps more than ever.  When Justin Bieber was arrested in January, Tavi Gevinson tweeted: “what bieber needs is a rookie reader to step in and become his more cultured girlfriend who shows him hal ashby movies and anais nin.”

Maybe in June, when "Twee" is released, I will send the Bieb a copy. It’s still not easy being Twee but it’s getting easier.  Remember, "punk" used to be pejorative term before it went from lowercase to capital P.