Sasha Obama "is not impressed" in China -- but leave her alone!

The young first daughter didn't smile every second in China. Cut her some slack 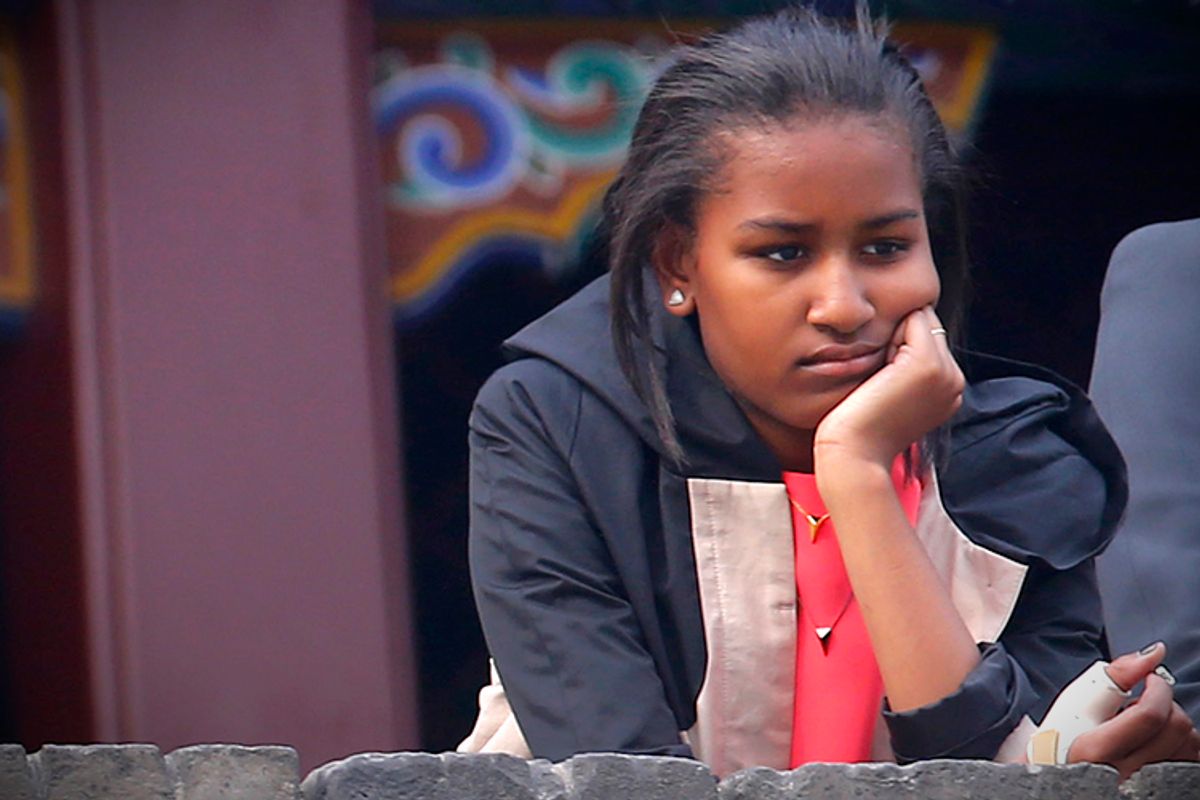 Sasha Obama watches a folk dance by performers during her visit at the City Wall, in Xi'an, Shaanxi province, March 24, 2014. (Reuters/Petar Kujundzic)
--

Given how rarely the two are in the public eye, Malia and Sasha Obama are naturally huge objects of curiosity for the press and for media consumers. Who can forget the pair's selfie snaps at the 2013 inauguration -- or reading into that a sense of the pair's personalities?

But the focus on the Obama daughters, when they're in public, cuts both ways. Today, the New York Post ran an entire story on how "Sasha Obama is not impressed" -- pegged to a photo of the younger Obama daughter leaning on a wall while watching a folk dance during her visit with her sister and mother to China. "Photos show Sasha looking like she’d rather be back home with her pals than hitting the highlights of the world’s most populous nation," writes the Post, putting its psychic abilities to work in reading Obama's mind via her facial expression. Sure, she doesn't appear delighted, but it's a split second, and other photos of the Obamas' diplomatic mission, as in Jezebel's album of the trip, depict Sasha Obama looking happy and engaged.

But why are photos of a 12-year-old girl being Zaprudered in this manner to begin with? The Post's motives seem transparent; the article skips merrily along past Sasha Obama's perceived boredom to paint a picture of a family of spoiled materialists, going into detail about the hotel in which the group stayed with "multiple Secret Service agents and other officials," as though the family ought to have saved some cash by ditching their security detail. Sasha Obama looking, for a moment, like a jetlagged 12-year-old, is not a story unless the Post can wrap it into a larger narrative.

But the Jezebel post is as strange, seeming to lecture Sasha Obama for her expressions in various photos. "She's not here for it," we're told repeatedly, as the first daughter stands placidly. She's called a "cranky teen" in a series of photos, taken apparently in succession, that depict her face going from a neutral expression to a smile. To be clear, she's not frowning or wincing or yelling at anyone. She's ... standing and observing various totally new sights without a huge smile on her face at all times -- and when she does smile, that's where the bizarre "cranky teen" allegation comes from. Is a neutral expression such an astounding image?

The whole incident, particularly in the New York Post's telling, is designed to call to mind the "McKayla Maroney is not impressed" meme from the 2012 Olympics, when the American gymnast pulled a face after being disappointed by her silver-medal finish. But -- insofar as these things are quantifiable -- Maroney actually looked peeved, not just tired, and she was in the public eye by her own volition. It was notable because Maroney really ought to have known better. Sasha Obama, protected by her parents, is almost entirely out of the public eye -- is it so surprising that, on a long trip to a far-off nation and unaccustomed to media attention, Sasha Obama might appear something less than perfectly attentive at every moment? And does it matter?

Happily, the conservative press seems not to have gotten into this non-story yet. But the hyper-focus on whether Sasha Obama (not yet a teenager) is a "cranky teen" or "not impressed" puts an undue amount of pressure on a child. Sasha Obama went on a diplomatic mission to another country where she's been exposed to what appears an exhausting schedule of events. To demand she have at literally all times a facial expression that can be read as eager, delighted happiness is the sort of policing that feels like it belongs in the days of Pat Nixon and her perfect daughters. It's the sort of thing that would make anyone wince.