The LGBT community shows how to take on the haters 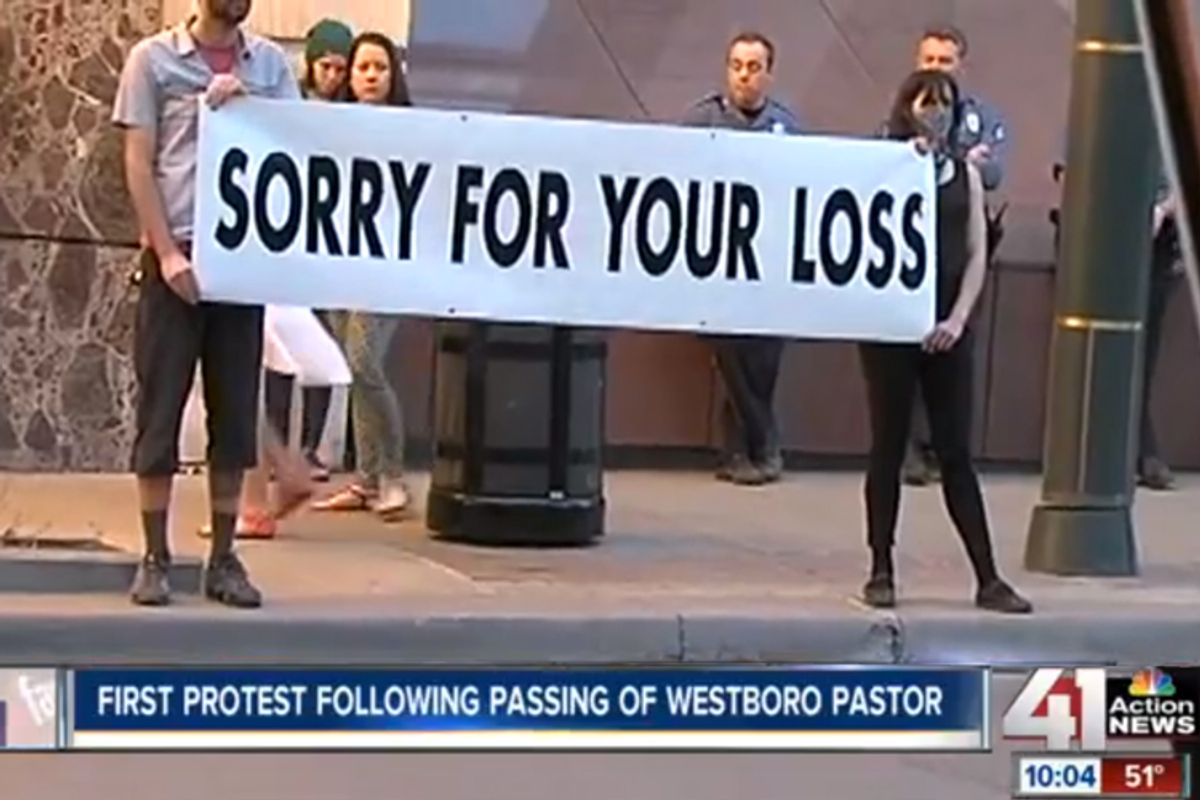 When you're met with consistent hatred, cruelty, ignorance and a whole lot of just plain stupidity, it's hard not to want to return the favor. It's a challenge to not push back with all the righteous anger in your arsenal, to not gleefully pounce on any opportunity to extract revenge. And when it comes to dealing with bigots, you almost couldn't be blamed if you did. In the past week, LGBT groups had two ripe opportunities to do just that. But by choosing instead to respond with grace, they struck a more powerful blow for tolerance than their opponents could ever have hoped to make for divisiveness.

First, there was the death of Westboro Baptist Church leader Fred Phelps. Considering his lengthy attention-grubbing history of sending protesters to disrupt the funerals of gay men and women and his famed catchphrase that "God hates fags," a certain degree of "Ding, dong, the witch is dead" enthusiasm might have been understandable. But instead, when the WBC posse of clowns picketed a Lorde concert near Phelps' home base of Kansas City over the weekend, they were met with a small band of counter-protesters, holding signs that read, "Live your life and be awesome," and "Sorry for your loss." Megan Coleman, who made the sympathy sign, told reporters, "We realized it wasn't so much about antagonizing them, but sending out the counter message that we are here for people who need that message and need positivity."

Others have followed in a similarly non-antagonistic path. The Rev. Darlene Nipper, deputy executive director of National Gay and Lesbian Task Force, issued a statement last week that acknowledged who Phelps was while expressing mercy for his loved ones, saying, "Through his actions, he brought needless pain and suffering to thousands of families, including to military families, at their time of greatest pain and grieving. While it is hard to find anything good to say about his views or actions, we do give our condolences to his family members at what must be a painful time for them." Bravo host Andy Cohen tweeted his hope that "Maybe Fred Phelps' life dedicated to evil & intolerance will teach others to be civil & kind," even as he added as a warning, "If there is a hell, then he is there." But it was actor and king of all social media George Takei who had the last best word on the passing of Phelps, stating on Facebook that "Today, Mr. Phelps may have learned that God, in fact, hates no one. Vicious and hate-filled as he was, may his soul find the kind of peace through death that was so plainly elusive during his life." Beautiful.

Yet even while Phelps was shuffling off the mortal coil, another anti-gay provocateur was trying to keep the torch of idiotic stunts alive, as Catholic League professional crackpot Bill Donohue's attempt to prove what big meanies The Gays are backfired hilariously. Last month Donohue, smarting from this year's increased pressure on Boston and New York's St. Patrick's Day parades to include LGBT groups, said in a TV interview that "If I wanted to get into their gay pride parade with my own float with big banners saying 'Straight is great,' they would have a right to feel put-upon and I wouldn't do that to them. They just don’t want to blend in like everybody else ... They don’t believe in tolerance and they don’t believe in diversity. If they want to have their own parade, fine, but don’t crash ours." Last week, he decided to test that theory, contacting the Gay and Lesbian Alliance Against Defamation and requesting a chance to march in June's LGBT Pride March in New York carrying a "Straight is great" sign.

GLAAD president and chief executive Sarah Kate Ellis promptly responded affirmatively, saying, "As a fellow Irish New Yorker, I’m hoping Bill will march with me at NYC Pride. I look forward to the day when I can march openly with Bill in the NYC St. Patrick’s Day Parade, and not be turned away because of who I am." And the parade’s march director David Studinski added, "Straight is great – as long as there’s no hate."

Funnily enough, the reality that he might have to actually embed himself in a sea of homosexuals did not sit well with Donohue, who backed out the next day, saying, "I objected to their rule requiring me to attend gay training sessions, or what they call 'information' sessions." Determined to play the bullied victim, even when you approached them and your argument makes no sense whatsoever? That is so Bill Donohue of you, Bill Donohue!

GLAAD says that its nefarious information sessions are for parade marchers to learn "line-up times, check-in locations, our moment of silence, dispersal activity, NYPD safety policies, attire and vehicle/sound permits," but as far as I'm concerned, "gay training sessions" sounds like a great idea too. Do those sessions include tips on how to be classy and compassionate when a homophobic bully dies? Do they include information on how to be welcoming and inclusive when some jerkwad who blames gays for the sex abuse in his own church tries to crash your biggest party of the year? Because if so, I think we've all already had a few stellar gay training sessions in the past week. They've shown us how to respond to hate and fear with love and humor and positivity. And if there's an agenda there, sign us all up.