Scientists say heavier rainfall, an effect of the warming atmosphere, will lead to more landslides 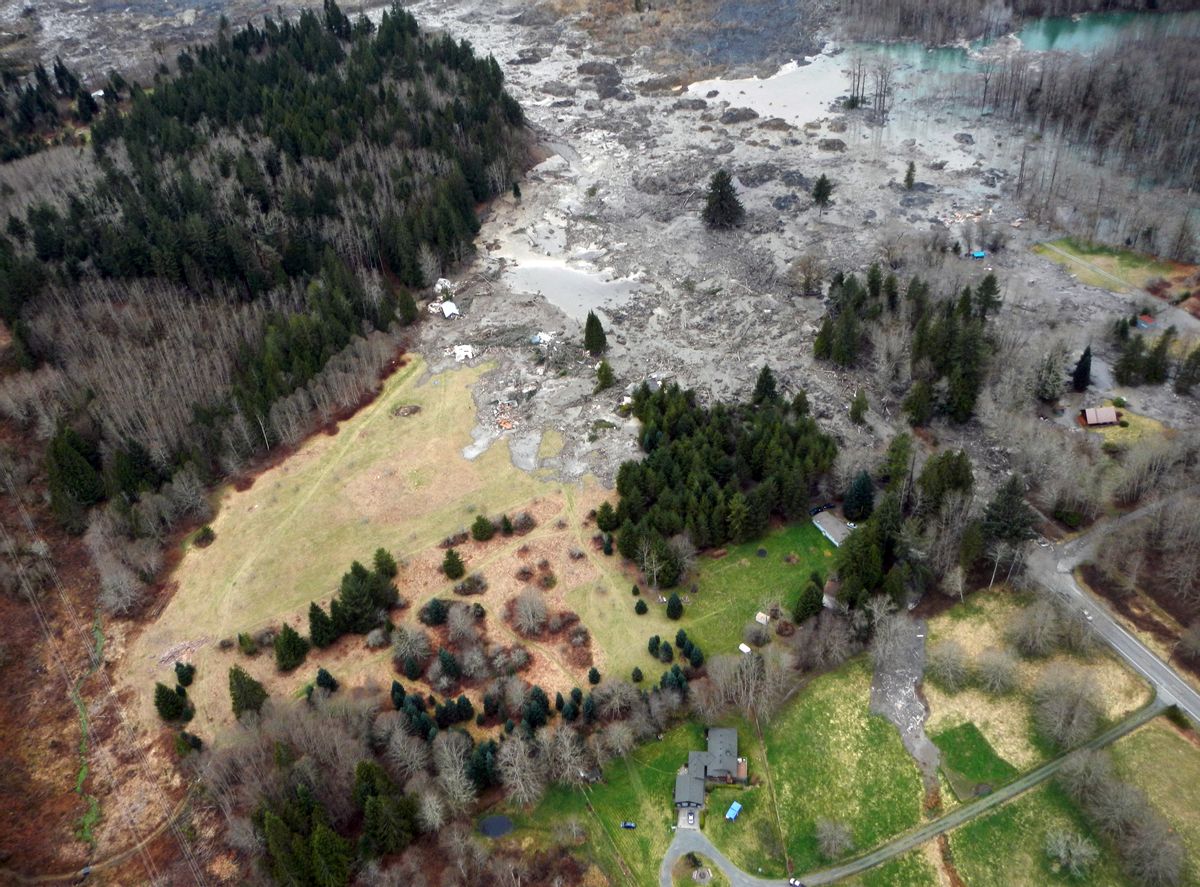 As rescuers continue to sort through the muck, the death toll in Washington's horrific landslide has risen to 14; officials say 176 have been reported missing, although that doesn't account for potential duplicates.

A terrible tragedy on its own, it's also a reminder of yet another hazard that could increase as global warming intensifies.

Meteorologist and Slate blogger Eric Holthaus explains that the most immediate cause of the landslide was the near-record rainfall experienced in the area this month (he links to an explainer from the Union of Concerned Scientists, which gets into the specifics of why a warmer atmosphere holds more moisture). Landslides aren't unusual for the region, but as Climate Progress explains, such weather is already linked to climate change, and is expected to become more common in the future:

Landslides are not unusual in Washington, but such a large one in close proximity to residences is more rare. Landslides cost the nation several billion dollars in damages annually according to the United States Geological Survey, and cause 25 to 50 deaths per year. The Pacific Northwest is predicted to get warmer and wetter according to climate change models, which will likely add to the economic and human costs associated with landslides in the region.

The average annual precipitation in Washington has increased by about one-third of an inch each decade since the beginning of the 20th century. Temperature averages have also increased about 1.5°F since 1920, with climate models projecting increases in annual temperature of, on average, 2.0°F by the 2020s, 3.2 °F by the 2040s, and 5.3°F by the 2080s.

“More extreme rain events –- the sudden and intense rain that we’ve been experiencing more frequently so a lot of the state routes are vulnerable to landslides today and the projections are that those will be worse,” Carol Lee Roalkvam, an environmental policy analyst with the Washington State Department of Transportation, told Oregon Public Broadcasting last year.

According to the University of Washington Climate Impacts Group, in the near future climate change will cause the region to see less snowpack, earlier snowmelt, and more winter rainfall, leading to more landslides.

As with any specific weather event or natural disaster, scientists can't draw a definite connection between this one landslide and climate change, University of Washington geologist Dave Montgomery explained to Earthfix. But, he confirmed, "if the climate changes in a way that we get a lot more rainfall you would expect to see a lot more landslides."

Development in risk-laden areas, of course, contributes to the human impact of such disasters as well. "The right question to ask," Montgomery added, "particularly in terms of this landslide on the Stilly, is to what degree do we want to investigate the hazards that are out there in the world around us and communicate that to everybody in society so we can all make informed decisions about where we live, the risk we may be running, how our infrastructure is a raid on the landscape."