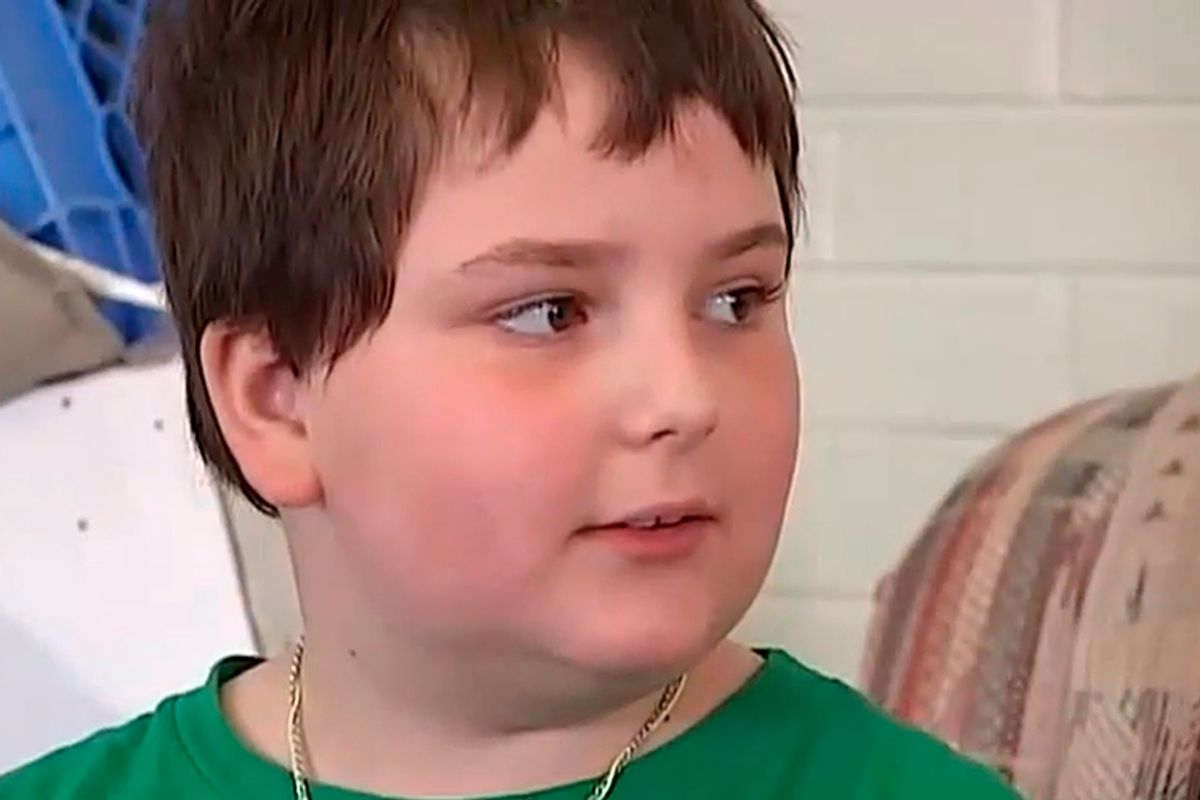 Eight-year-old Sunnie Kahle's family says that she has never had any disciplinary problems. They say that as a student at Virginia's Timberlake Christian School she has maintained a 4.0 academic average. School administrators confirm this. But Kahle's great-grandmother and legal guardian Doris Thompson says that the child was nonetheless recently invited to leave the school anyway. Why? Because she's not feminine enough.

Sunnie has short hair, a style she first adopted when she turned 5 and declared she wanted to donate her long locks for kids with cancer. Since then, she's preferred jeans and T-shirts and has decided, Thompson says, "She didn't want to wear her frilly dresses anymore." Today, she likes teddy bears and bracelets – as well as collecting autographed baseballs and playing "rough and tough." And sadly, in a world in which the pressure on little girls and boys to conform to rigid gender roles is more ramped up than ever and eschewing pink is somehow suspect, Sunnie's style would likely be questioned almost anywhere. (And yes, I am saying this as a parent whose daughters have attended hippy-dippy New York City public schools.) But in a strictly conservative environment, her demeanor could be interpreted as tantamount to revolution. Last month the school sent home a letter, which has been obtained by local news station WDBJ7, reminding Sunnie's caregivers of its right to decline students who do not follow a "biblical lifestyle."

In the letter, elementary principal Becky Bowman stated, "We believe that unless Sunnie and her family clearly understand that God has made her female and her dress and behavior need to follow suit with her God-ordained identity, that TCS is not the best place for her future education" and warned "We do not want her future years be filled with confusion and conflicting input from those we are guiding her." [sic] In a written response, Thompson  told Bowman that the child is being treated for mood disorders but that "Sunnie and her family clearly understand that God made her female. Sunnie's psychiatrist states that Sunnie IS NOT homosexual. The doctor is upset that you being 'Christian' would label an eight-year-old adolescent…. God loves all his children and I believe that Sunnie is special."

It'd be nice if Thompson didn't feel the need to defend the young "tomboy" as emphatically not gay, but in her recent conversation with the WDBJ7, Thompson added, "If my child grows up to be homosexual or transgendered, I will love her that much more." And she noted, "To claim that we are condoning sexual immorality in our home is nonsense." She has since voluntarily put the child in a public school. Sunnie herself says that she's sometimes been asked if she's a boy or a girl but that it doesn't bother her.

In a statement, school administration Jeff Abbett claims, "There is much more to this story" than Thompson has let on and that "Our TCS teachers and administrators love Sunnie and we can assure everyone that this has never been an issue of hair length or boots as it has been portrayed. It has been our constant desire over the last several years to work with this family and to shepherd this precious little girl in a way consistent with traditional values." But the school's admissions policy does warn that it "reserves the right, within its sole discretion, to refuse admission of an applicant or to discontinue enrollment of a student. This includes, but is not necessarily limited to, living in, condoning or supporting sexual immorality; practicing homosexual lifestyle or alternative gender identity." And it's totally their call what "alternative gender identity" looks like, even for a prepubescent child.

The penalties for children who don't strictly adhere to narrow definitions of masculine and feminine can be severe – and the consequences are often as likely to be meted out by adults as other kids. Earlier this month in North Carolina, 9-year-old Grayson Bruce was banned from bringing his "My Little Pony" backpack to school by an administration that feared it was a trigger for bullying. (The school later reversed its ludicrous decision.) But being a boy or a girl is so much more than the length of your hair or the logo on your backpack. Sunnie and Grayson know this. Why didn't their schools?

Sunnie has moved on and is adjusting to her new school. "I should just be able to be me," she says, "and not let them worry about it." And she's already learned a valuable lesson from her old school – that whatever else anyone says or judges, she is fearfully and wonderfully made, just exactly as she is.