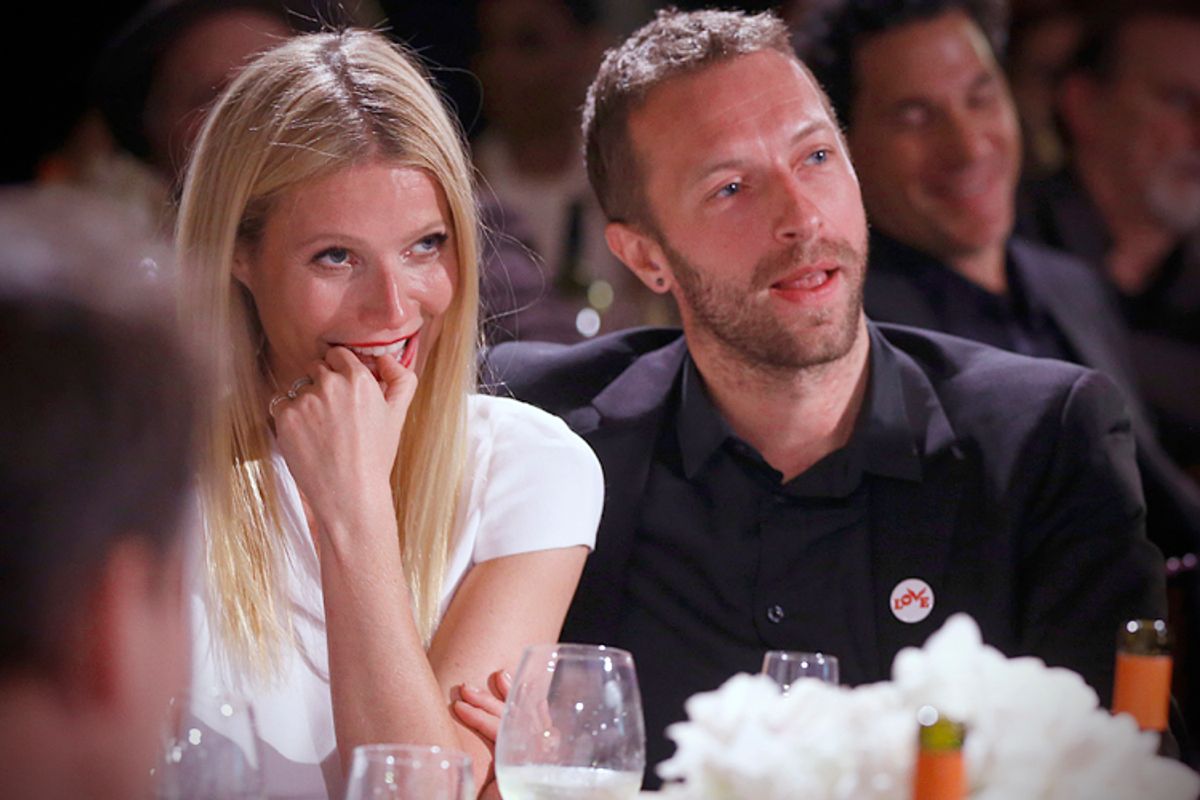 If ever there were two less easy to relate to humans in the world, they'd likely be Gwyneth Paltrow and Chris Martin. They're obscenely rich, wildly successful – and widely, deeply despised. As the frontman of Coldplay, Martin's been called a wanker by wanker Hall of Famer Bono. As an icy blond sometime actress, apparent Vanity Fair takedown blocker and full-time Goopista, Paltrow's been called everything from "a tone deaf Marie Antoinette" to "nearly universally loathed figure." So when Paltrow & Martin announced Tuesday on the "insufferably pretentious" lifestyle site Goop that they were breaking up, of course it wasn't in the words of mere mortals.

Instead, it was done in the language of a "conscious uncoupling," with the delicate revelation that "It is with hearts full of sadness that we have decided to separate." The message went on to say that "We have been working hard for well over a year, some of it together, some of it separated, to see what might have been possible between us, and we have come to the conclusion that while we love each other very much we will remain separate." And then, beneath the announcement, there was a lengthy follow-up by Dr. Habib Sadeghi and his wife, Dr. Sherry Sami, on the subject of "conscious uncoupling." It involved healing, looking within, seeing "people as individuals, not just the relationship" and a lot of stuff about insects and endoskeletons and "the lack of intercourse between our own internal masculine and feminine energies" that I seriously doubt anyone reading would look at and think, "Oh man, yes. This is totally my life."

But where the conversation took a surprisingly empathy-worthy turn was the newly uncoupled duo's assertion that "We are, however, and always will be a family, and in many ways we are closer than we have ever been. We are parents first and foremost, to two incredibly wonderful children and we ask for their and our space and privacy to be respected at this difficult time. We have always conducted our relationship privately, and we hope that as we consciously uncouple and co-parent, we will be able to continue in the same manner." You know what? Good for them.

Like you, I have several friends who can speak of their "starter marriages" as broken relationships with fairly clear beginnings, middles and ends. But breaking up when you have created human beings together, when you are still deep in the throes of raising them, is a completely different ball of wax. It's still a lifetime relationship. Period. As a friend once succinctly put it, "I'll be at my son's wedding, and my ex will be there." Her son was in kindergarten at the time.

Paltrow and Martin have been together 11 years and have a 9-year-old daughter, Apple, and a 7-year-old son, Moses. Paltrow has also spoken openly about the pain and disappointment of a miscarriage a few years ago. These are the ties that a divorce won't ever change. These are the things that every couple that goes through the end of their union with children in the picture have to figure out.

It's not that a marital breakup is ever easy. But figuring out how to be a family when you're no longer a couple takes epic additional effort. It takes compromise and generosity and learning on a near constant basis to be OK with being uncomfortable. It takes showing up and holding it together while your heart is in pieces, and accepting that the person who is the star of your heartbreak drama is always going to be a prominent fixture in your life.

I have no doubt the stresses of a marital implosion are considerably lessened when you don't have to hyperventilate over how you're going to survive financially when you're no longer sharing expenses. The economic sucker punch that most men and women experience in divorce will not be a factor for Martin and Paltrow. But it's entirely possible that they'll experience many of the same demoralizing lost friendships and often lonely new moments of terrified reinvention. They will still have to figure out how to love and console a 9-year-old and a 7-year-old, and no matter how rich those kids are or how many rooms their multiple houses have, they're still children whose mom and dad are ending their marriage, and that's a life-defining thing for any child.

Paltrow and Martin are not people whose trials generally elicit much sympathy, and sure enough, the Guardian was quick on Wednesday to Britishly call their announcement "deluded tosh" and to sniff, "You have messed up other lives." As if breaking up is always tantamount to "messing up," or couples who stay together are always automatically doing their children a greater service. Hey, bite me. Unless you've been there, unless you've gone through that particular searing experience, you have no idea how much it takes to end a marriage with children. So I'll tell you what it takes. It takes everything you've got, whether you're an Oscar-winning actor with a penchant for overpriced cocktail napkins or, like my mom was, a struggling single parent. My mother hasn't seen my father in over 40 years. You know the last time she told me how much I look like him? Last week. And I would gladly rather relive my two solid years of cancer treatment than the time surrounding my own marital breakup. Gladly. Twice.

As Sophie Heawood beautifully wrote Thursday in Vice,"Falling out with the person with whom you created children is a heartbreak that I can’t even describe. You can’t drink it away or find someone else so that it doesn’t matter any more. It will always matter." So no snark today. I'll go back to rolling my eyes at Gwyneth's insane juice cleanses some other time. Today she's just another mom, trying to figure out how she's going spend the rest of her life with a man she no longer wants to be married to. And I know plenty of people can relate.