GOP's toxic contraception politics: Why being the party of "Uncle Sugar" will doom them

Democrats face real political challenges. But GOP's poisonous approach to contraception could help wipe them away 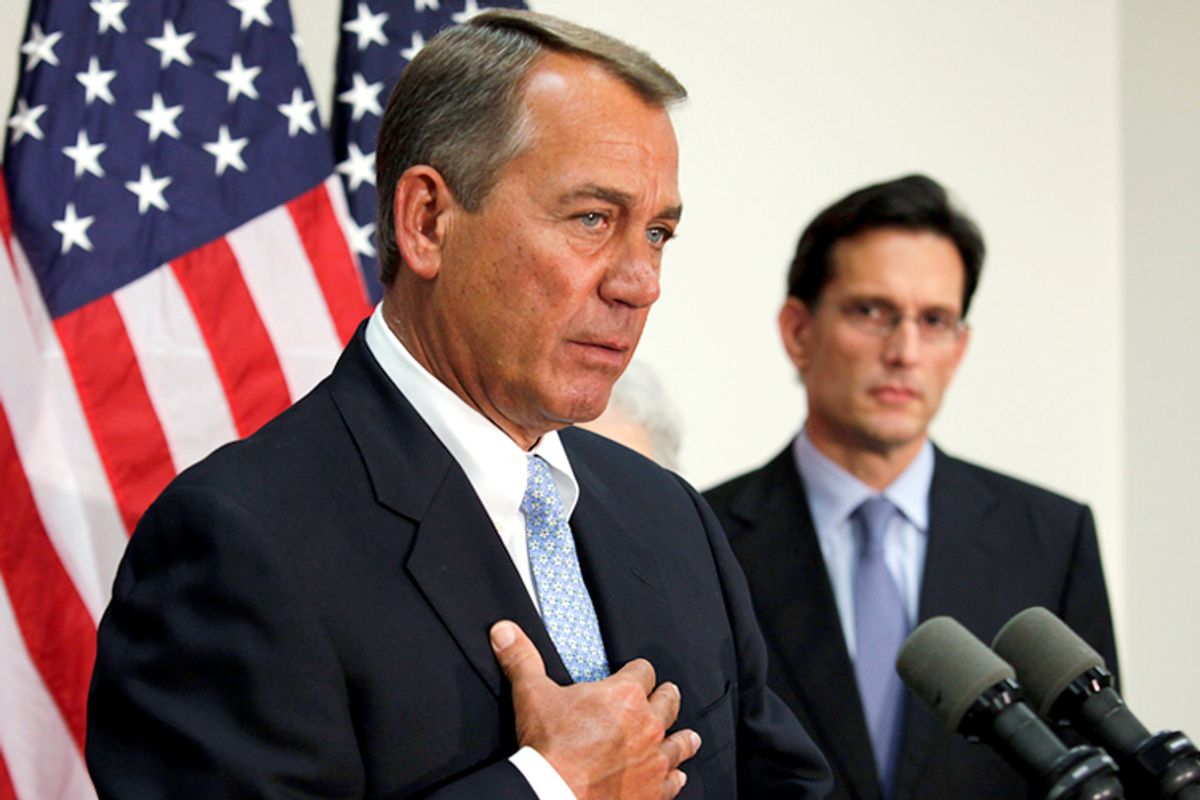 Republicans know they have a problem with women. Mitt Romney knew early on that Obama’s huge lead among unmarried young women had to be cut down, so Romney started campaigning with Republican women and Ann Romney became one of his chief surrogates. “I LOVE YOU WOMENNNNNN,” Mrs. Romney belted out at the Republican National Convention. Despite the canny subtlety of these efforts, Romney lost the female vote by 11 points, and lost unmarried women by an astounding 36 points.

After Romney lost, the Republicans looked to make changes. “Much was written after the 2012 election regarding the Republican Party’s ‘women’ problem,” the Republican National Committee’s Growth and Opportunity Project observed. “The RNC must improve its efforts to include female voters.” Just last week, RNC chair Reince Priebus acknowledged that Republicans still have work to do on that front. “We basically have a single-women problem under 35-ish,” Priebus said. “It’s a demographic issue that we want to do better with.”

Republicans want to prove to women that they’re sensitive to their concerns. And what better way to show it than to line up behind a corporation pushing for the “religious freedom” to deny its employees contraceptive coverage? Republicans know how vitally important women voters are in national elections, and they know how politically troublesome contraceptive coverage can be for them. But they’re going back for another bite of the apple because they’re hidebound by ideology, and they really hate Obamacare.

As Hobby Lobby and Conestoga Wood Specialties went to the Supreme Court yesterday to argue for a religious exemption to Obamacare’s contraceptive coverage mandate, congressional Republicans fired off statements of support. “Religious freedom is not for some people under some circumstances; it is for one and all,” read a statement from John Boehner. “It's time to restore our complete and unwavering support for religious freedom and that is why I stand with those arguing for their liberty before the court today,” said Eric Cantor. You’ll find a similarly worded statement from almost every high-profile Republican defending Hobby Lobby’s assertion of “religious liberty.”

While they say “religious liberty,” the heart of this matter is the conservative belief that ladies who have sex should buy their own sex drugs using their own sex money. There’s a moral component, they argue, given that contraceptives facilitate anything from wanton licentiousness to euthanasia to abortion. (None of that is true.) This notion that contraceptives cause abortions is the most interesting one, given that it is central to the case against the Affordable Care Act, even though it is complete garbage in the eyes of the medical community. The fact that contraceptives also may be medically necessary to treat certain reproductive disorders is too often left unmentioned.

This Republican war on contraception is a fairly new phenomenon, and in its short life it has never been a political winner for the GOP. Never, not once. Back in early 2012, Republican presidential candidates argued that Obamacare’s contraceptive coverage mandate was an act of war against religious liberty. Sen. Roy Blunt, R-Mo., introduced an amendment to the highway bill that would have allowed employers to refuse coverage of any health service contrary to their “religious beliefs or moral convictions.” The public rejected the argument by a huge majority, while the White House and the Obama campaign went on offense, happily expanding the “War on Women” narrative to include attacks on contraception. Republicans eventually backed off because they worried “about further alienating women” before the 2012 election.

Despite every indication that contraception politics is poisonous to their image and their electoral ambitions, the Republicans are diving once more into the breach because the Hobby Lobby case is a fantastic opportunity to sabotage Obamacare. If the court rules in Hobby Lobby’s favor – an outcome that court observers view as distressingly likely – Republicans will have scored a huge victory over Obamacare. That’s too tempting to pass up, given that they’re banking on Obamacare’s unpopularity and low Democratic turnout to take control of the Senate in November.

But while the public is frustrated with Obamacare, they’re not crazy about undoing the contraceptive mandate either. A majority, 53 percent, say employers should not be exempt from the mandate “even if they have religious objections.” People ages 18 to 35 oppose employer exemptions to the mandate by a yawning 62-33 percent. The calculation Republicans are making is that they can stir up the “War on Women” again and perhaps even rile up some of the Democratic base and still score a huge victory in 2014.

They may be right, but 2016 (and a potential Hillary Clinton candidacy) will be here before we know it. And if the GOP is still the party of “Uncle Sugar” by that point, then it’s in big trouble.