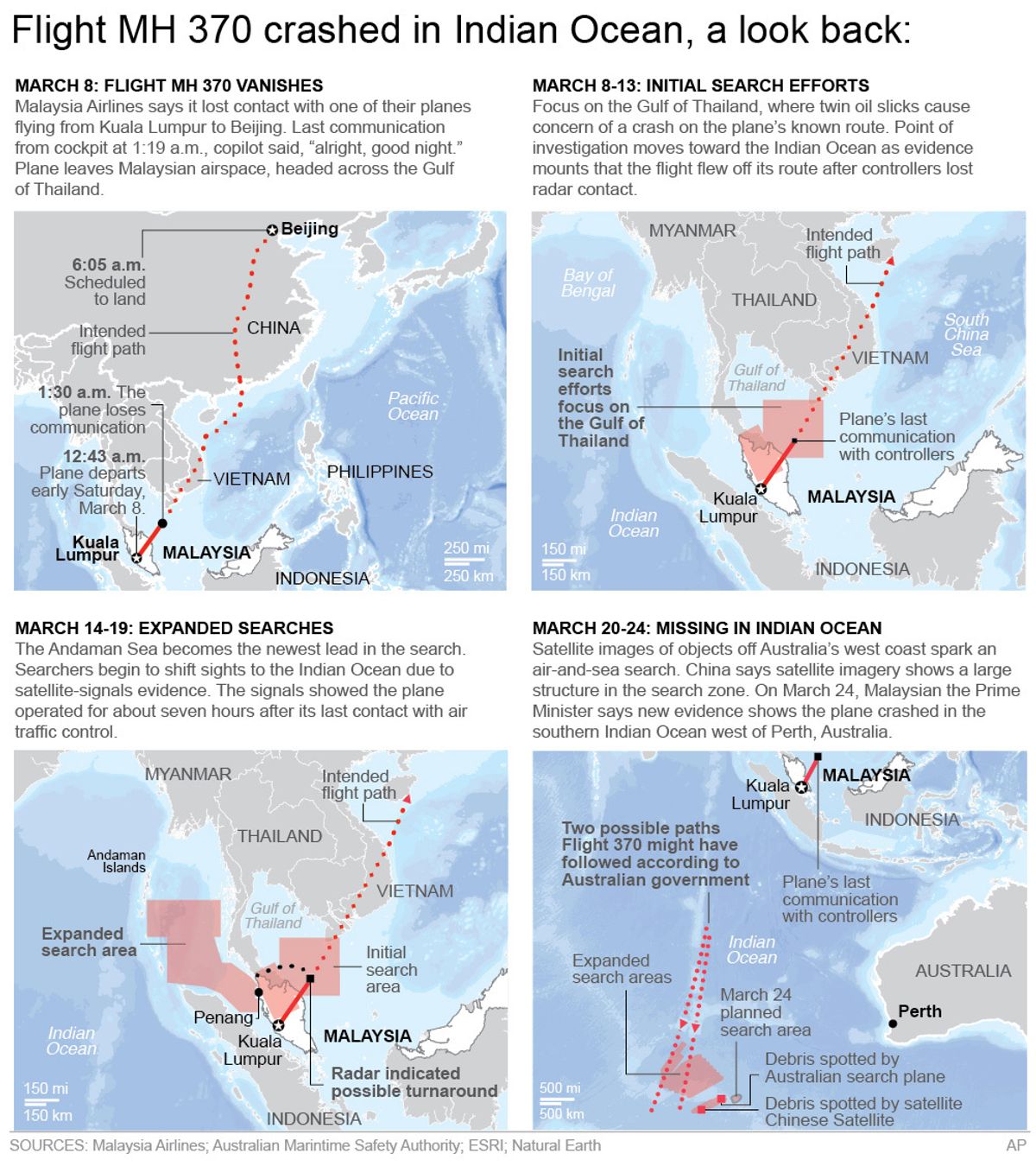 A newly released French satellite image shows what may be a debris field containing 122 objects; according to the Guardian the objects range in size from 3 feet to 75 feet. Minister of Defense and Acting Minister of Transport  Hishammuddin Hussein held a press briefing where he called the new images, coupled with images from Australia and China, "the most credible lead we have," in the search for missing Malaysia Airlines flight MH370.

The search area in the Indian Ocean has been split into western and eastern zones. According to the Guardian each sector will have six planes and one ship assigned to it:

"In the East sector, searches will be conducted by:

In the West sector, searches will be conducted by:
· one US P8 Poseidon.

The HMAS Success (an Australian ship) will continue its search in the west and the Chinese icebreaker "Xue Long" is in the east. A U.S. Navy black box "ping" detector also arrived in Australia to aid in the search.

Storms and poor visibility have hampered the search. No physical debris has been found yet. Australian Prime Minister Tony Abbott made a statement in the Australian House of Representatives. Part of his remarks are below; the full transcript can be found here:

"A considerable amount of debris has been sighted in the area where the flight was last recorded. Bad weather accessibility has so far prevented any of it from being recovered, but we are confident that some will be. Madam Speaker, we mourn all those 239 passengers and crew. We especially mourn the six Australian citizens and the one Australian resident who must be presumed dead, and we grieve with their families and loved ones."

He also cautioned that the search zone is "about as close to nowhere as it's possible to be."

Relatives of Chinese passengers marched in protest to the Malaysian Embassy yesterday where they chanted, held signs and threw water bottles. Flight MH370 was on its way to Beijing when it went missing; 154 passengers (two-thirds of those on board) were Chinese. Many family members are in angry disbelief that the Malaysian government could determine that the flight "ended" in the Indian Ocean without finding debris. Some are refusing to give up hope that their loved ones are gone.

According to the Straits Times foreign desk:

The anger and finger pointing has spread to all involved. The Malaysian government saying that British satellite company Inmarsat, whose data determined the plane's end in the Indian Ocean, was invited to help brief families of lost passengers but declined. There is still no comment from Inmarsat. The Malaysian government and Chinese government have also traded barbs. Currently a special envoy from China, Zhang Yesui, is in Malaysia. He is demanding that Malaysia release all information and data that led to the conclusion that the plane crashed into the Indian Ocean.

Reuters is reporting that the first potential lawsuit against Malaysian Airlines and Boeing is being pursued. According to Reuters, "A petition for discovery has been filed against Boeing Co, manufacturer of the aircraft, and Malaysian Airlines, operator of the plane, Chicago-based Ribbeck Law said in a statement on Tuesday."