"The Raid 2": Come for the violence, skip the plot

This follow-up to the Indonesian cult hit has even more eye-popping mayhem, but why bother with the canned drama? 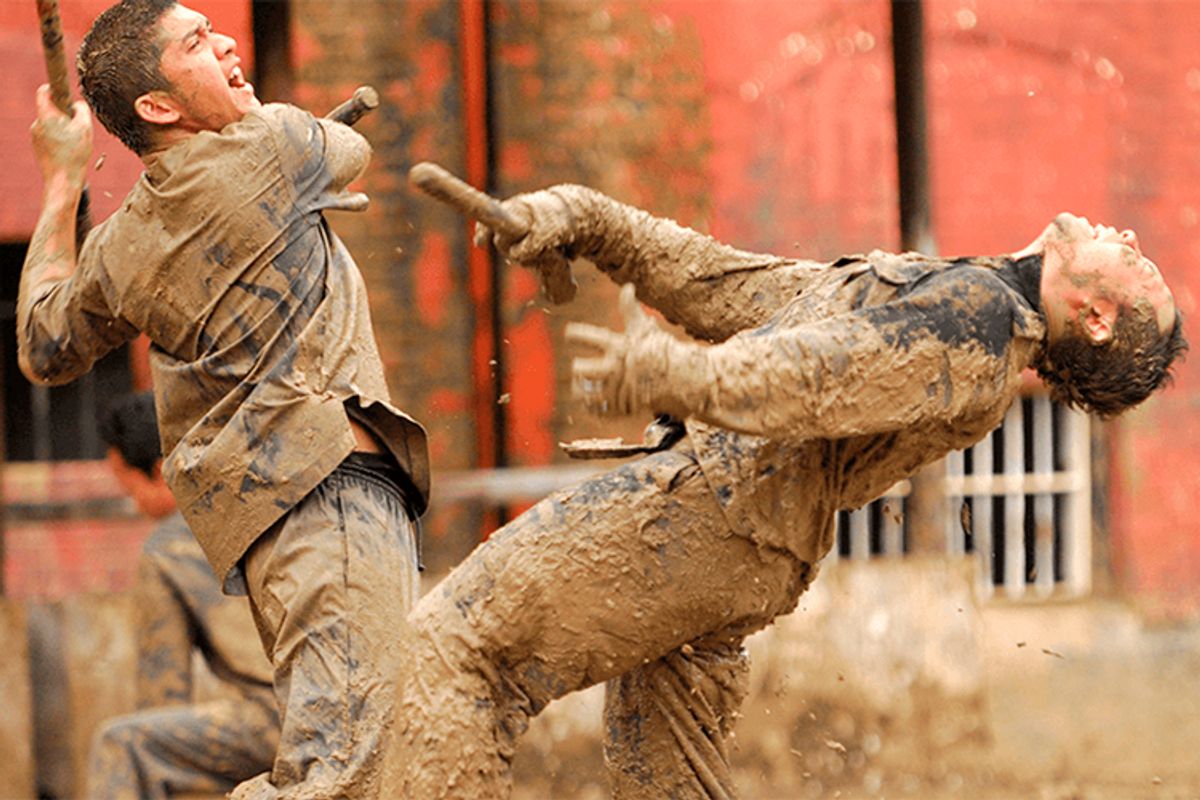 “The Raid 2” is a hellacious midnight action movie made by the Welsh expatriate Gareth Evans, who has single-handedly channeled the extraordinary martial-arts tradition of Indonesia into two international hits. It’s not like Evans invented the Indonesian film industry, which has existed for decades, but he has pushed it beyond cranking out sloppy, no-budget work aimed at the home-video market. This one picks up right after the glorified video-game plot of 2011’s “The Raid” leaves off, with clean-cut Jakarta cop Rama (Uko Iwais, who also helped choreograph the fight sequences) about to go undercover inside a crime family and kick immense amounts of ass. He will kick ass in a mud-sodden prison yard, a porn production studio (featuring a diminutive woman wearing an enormous strap-on), a crime lord’s warehouse, a moving car (twice), an upscale nightclub, an office building and a gourmet restaurant, and no doubt other venues I am forgetting.

Here’s the thing: This movie is an overflowing cornucopia on one level, and an illustration of the premise that more is less on the other. Evans, Uwais and the cinematography team of Matt Flannery and Dimas Imam Subhono stage one episode of climactic mayhem after another, almost any of them good enough to provide the crescendo for a lesser action film. The gruesome “chick with hammers” scene aboard a subway train has already achieved legendary status among genre geeks, as has the highway chase scene, mostly shot from overhead, in which a handcuffed Rama has to overcome a team of gangsters who are taking him out to a rural field to finish him off. One of the most charismatic opponents from the first “Raid” returns (shaggy Javanese martial artist Yayan Ruhian), and a new one – a sardonic, wordless fellow known only as the Assassin (Cecep Arif Rahman) is added to the mix.

But Evans – who wrote, directed and edited the film – evinces the no doubt laudable ambition to stretch beyond the booby-trapped, claustrophobic, one-damn-thing-after-another apartment-building setting of the first movie, and that’s a mixed bag. At nearly 150 minutes, “The Raid 2” is just a hell of a lot of a good thing; in fact it’s so much that it stops being a good thing, and tips over into decadent, incomprehensible farrago. I really want to defend “The Raid 2” as a film that embraces its momentary and simultaneous nature, a film that has the conceptual purity of Charlie Chaplin (except with more hammers) and rejects the middlebrow model of movieness. But in this case that simply isn’t true, and much as I enjoyed watching most of it, I was deeply grateful when it was over and feel no strong desire to see the inevitable “Raid 3.”

One way of looking at this problem is that every major film genre embodies limitations that restrict its dramatic potential: The guy and girl who seemed so mismatched in the first reel must end up together; Spider-Man must defeat his adversary but suffer a personal loss along the way. But nobody these days would dispute that crime thrillers or science-fiction movies can transcend their generic boundaries, can violate the supposed rules and veer into political commentary, social satire and almost any other form of discourse. Action movies present a particular problem, and martial-arts action movies present that problem in a highly refined form: Nobody cares about the characters or the plot. The question of “what happens” in the film resolves to a series of spectacular present-tense set pieces; the bracketing story is about as interesting and as well executed as the portions of a porn film in which the actors are wearing clothes.

Sure, if you’re a martial-arts buff you can come up with exceptions, probably drawn from the hybridized golden age of Hong Kong cinema in the ‘80s and ‘90s. More recently, we’ve had the Jet Li hit “Ip Man” and Wong Kar-wai’s “The Grandmaster” – both fictionalizing the same real-life figure. Johnnie To’s crime drama “Drug War” was lavishly praised for spinning a competent but highly familiar gangland thriller around a handful of fight scenes and shootouts. I’m not claiming I didn’t like those movies, or that I don’t share the prejudice that plot and characterization somehow lend a movie more credibility. But I also think we need to be honest that it’s just a prejudice, and that what’s been called the “classical paradigm” of Hollywood storytelling was never inscribed by God on Mt. Sinai. Do any of Bruce Lee’s movies feature a story worth a damn? Has that prevented him from being one of the most revered and iconic heroes in movie history?

What I’m saying is that to my taste Evans and company expend way too much effort on an overly familiar narrative that’s been done many times before, including in both Scorsese’s “The Departed” and its Asian model, “Infernal Affairs.” Rama gets drafted by a supposedly uncorrupted cop to go deep undercover as a young soldier in a crime empire, who comes between the handsome, spoiled heir apparent and his aging, unforgiving dad. Maybe doing this kind of boilerplate drama with some degree of competence represents a step forward for Indonesian cinema, but it’s definitely never remotely surprising or interesting. As the film drew near and then droned past the two-hour mark, I lost all patience with the multiple betrayals and narrative switchbacks, and stopped even pretending to care. Curiously (or perhaps not curiously), the final confrontation in “The Raid,” which has almost no plot at all, carried way more emotional resonance than anything in this sequel. Though I will miss the chick with the hammers.

“The Raid 2” opens in limited release this week, with wide national release to follow.