Twitter to Turkey: "Political speech is among the most important speech"

A Turkish court lifted the ban on Twitter, but the legal battles have just begun 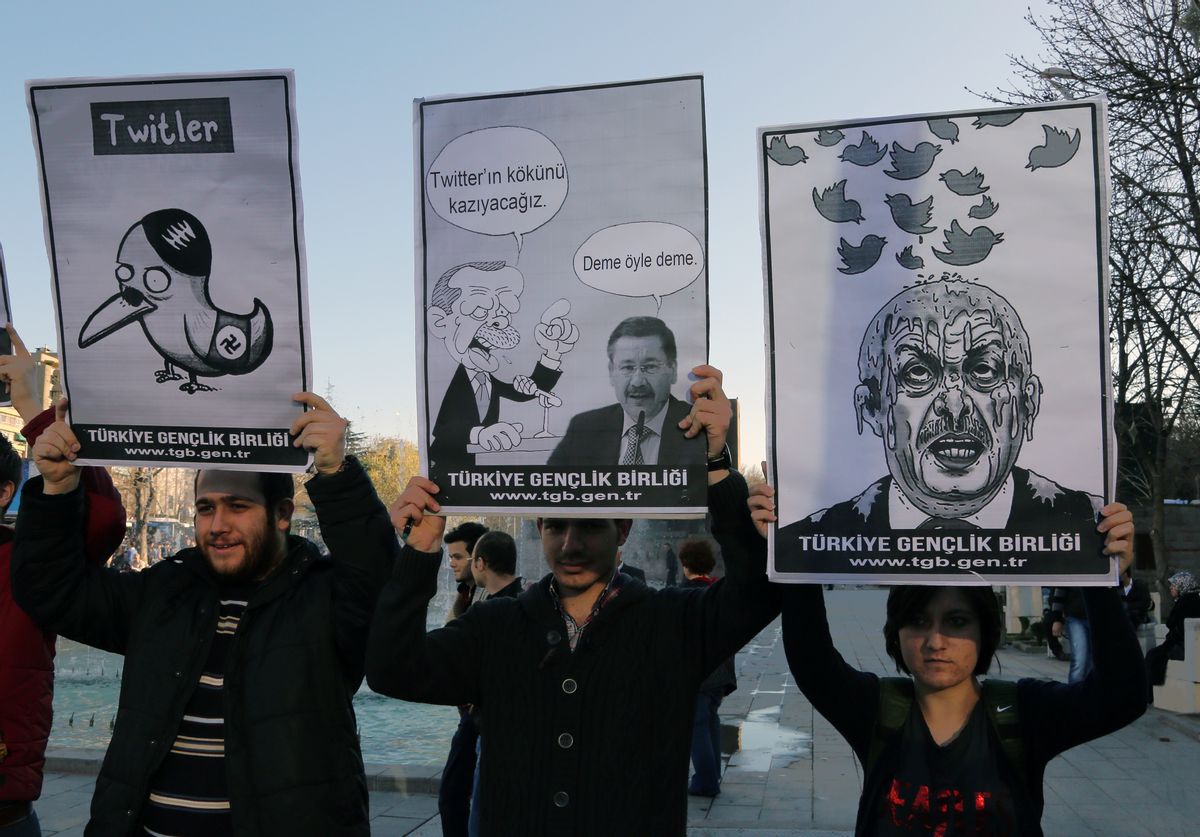 Members of the Turkish Youth Union hold cartoons depicting Turkey's Prime Minister Recep Tayyip Erdogan during a protest against a ban on Twitter, in Ankara, Turkey, Friday, March 21, 2014. Turkey's attempt to block access to Twitter appeared to backfire on Friday with many tech-savvy users circumventing the ban and suspicions growing that the prime minister was using court orders to suppress corruption allegations against him and his government. Cartoon in center reads: Erdogan, left, to his Ankara Mayor Melih Gokcek " we will rip out the roots of Twitter." Gokcek: "don't say it." (AP Photo/Burhan Ozbilici) (AP)
--

A court in Turkey has issued a temporary injunction and is demanding that the government lift its statewide block on Twitter. On March 20, 2014, the Turkish government, by way of a court order, blocked the social media site. According to the Associated Press, the Turkish Telecommunications Authority "accused Twitter of disobeying court orders to remove content."

According to TechCrunch, appeals were filed by "Turkish Bar Association, the Journalists’ Association of Turkey and some opposition politicians," to reverse the ban. There is no certainty that the Telecommunications Authority will actually remove the block on Twitter, or how long the ban will remain lifted. The Telecommunications Authority could challenge the appeal, and the legal battle would continue.

In December, incriminating audio files of Prime Minister Recep Tayyip Erdoğan's son, media executives and possibly the prime minister himself were released on YouTube, and continuously circulated on Twitter.

This morning Twitter released a statement regarding the court-ordered block. According to the release the ban was due to three court orders to remove content, which Twitter did not see prior to the site being blocked. Two pieces of content violated Twitter's own rules and were already taken down. The third was an account that accused the prime minster of corruption. Twitter said the final order caused them "concern" because of the violation of political speech. The statement is in full below:

It’s now been six days since the Turkish government blocked access to Twitter. Throughout this time, we’ve been engaged in discussion with Turkish authorities to hear their concerns, inform them about how our platform and policies work, and try and bring this situation to a resolution. But still, the millions of people in Turkey who turn to Twitter to make their voices heard are being kept from doing just that.

So today, we filed petitions for lawsuits we have been working on together with our independent Turkish attorney over the last few days in various Turkish courts to challenge the access ban on Twitter, joining Turkish journalists and legal experts,Turkish citizens, and the international community in formally asking for the ban to be lifted.

The purported legal basis for the ban is three court orders (none of which were provided to us prior to the ban) and a public prosecutor’s request.

Two of the three court orders relate to content that violated our own Rules and is already suspended. The last order instructed us to take down an account accusing a former minister of corruption. This order causes us concern. Political speech is among the most important speech, especially when it concerns possible government corruption. That’s why today we have also petitioned the Turkish court on behalf of our users to reverse this order.

While we contest the order, we are using our Country Withheld Content tool on the account in question, the first time we’ve used it in Turkey, as well as on several Tweets based on the public prosecutor’s request regarding the safety of an individual. The tool allows content to be withheld in a specific jurisdiction while remaining visible to the rest of the world. We have already provided notice of this action to the affected users, and are posting all information we’re legally able to disclose about the withholdings to Chilling Effects.

We’d like to emphasize that at no point during this blockage have we given the Turkish government any user data like email or IP addresses, consistent with our commitment to user privacy.

With all announced bases for the access ban addressed, there are no legal grounds for the blocking of our service in Turkey. Furthermore, with positive developments today concerning judicial review of this disproportionate and illegal administrative act of access banning the whole of Twitter, we expect the government to restore access to Twitter immediately so that its citizens can continue an open online dialogue ahead of the elections to be held at the end of this week.

Since March 20, Twitter users in Turkey have found creative ways to circumvent the ban including using SMS, and Google DNS "8.8.8.8."