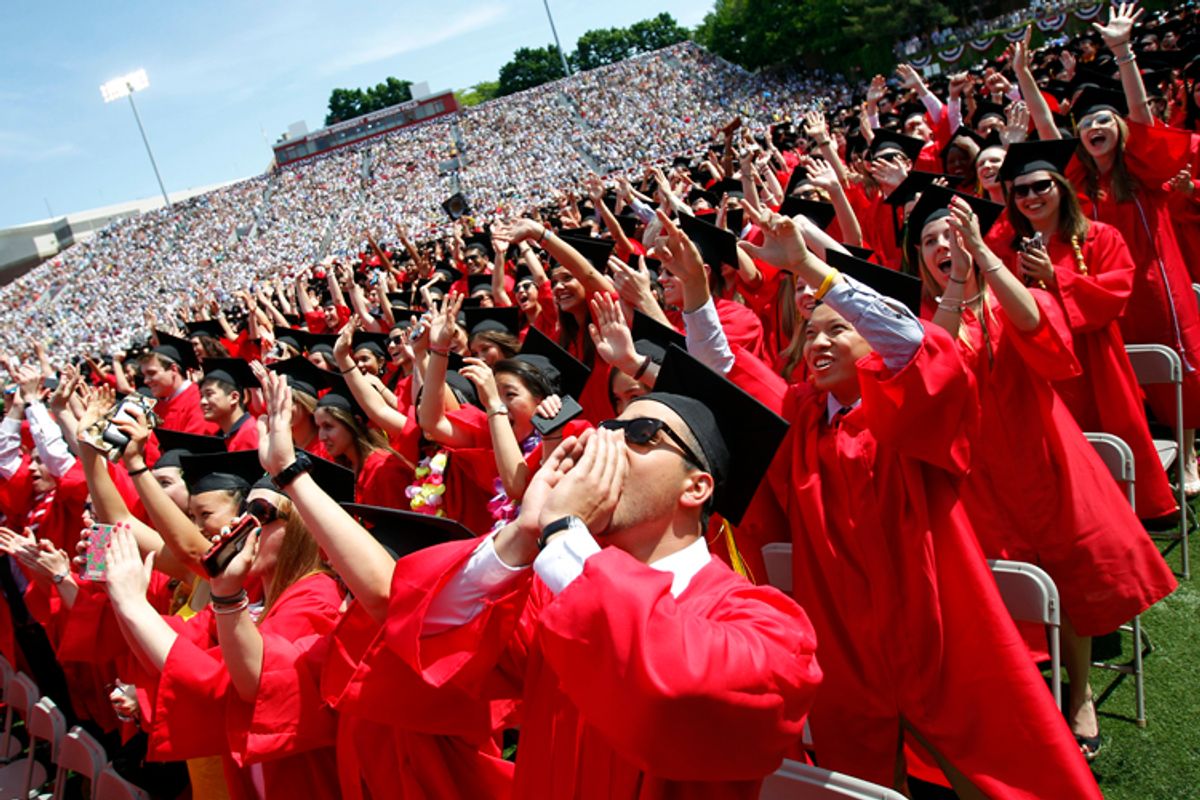 Here's a pop quiz for you. What words come to mind when I say "liberal arts education"? Are they, by any chance, "useless"? "Worthless"? "Irrelevant"? Congratulations, you pass. You don't get to be a loser!

The idea that dopey, unimportant subjects like humanities and social studies are the educational equivalent of a scratchers ticket – a little amusing but probably a ridiculous squandering of your money – is so persistent and pervasive, it's become an easy punch line. In "Groundhog Day," Bill Murray responds to Andie MacDowell's admission that she studied 19th-century French poetry by snorting, "What a waste of time!" The long-running musical "Avenue Q" subversively sets the tone for the whole show right in the opening number, in which a recent Princeton grad moans, "Four years of college and plenty of knowledge have earned me this useless degree!" In the movie "Liberal Arts," Josh Radnor deadpans that his major was "English, with a minor in history, just to make sure I was fully unemployable." And earlier this year, even President Obama offhandedly assured, "I promise you, folks can make a lot more potentially with skilled manufacturing or the trades than they might with an art history degree."

Then this week, that "fully unemployable" description received more validation when the site PayScale released its annual college Return On Investment report. Asking, "How do you measure the value of a college education?" PayScale ranked American institutes of higher learning "based on total cost and alumni earnings," and the results were not exactly shocking. All of its top 10 schools, with the exception of Ivy Leaguer Stanford, were for science and technology. Though Slate's Jordan Weissmann helpfully noted that the rankings were only for bachelor's degrees, so with "no doctors, lawyers, or MBAs, the advantage is naturally going to lie with the tech schools," the results were soon reported with headlines about "10 Colleges That Are Worth the Money" and which "US Colleges and Majors Are the Biggest Waste of Money." The Atlantic further assessed the top "waste of money" majors at low-ranking schools. They were: arts, humanities and English, education, and social work and criminal justice. And in case you don't see where this is all going, last year, Business Insider crowned MIT the "best college in America" by declaring, "When it comes to assessing the value of a college, only one thing matters: how much that school will help you succeed in life." A reader who participated in the ranking asked, "Are you going to learn any distinct, transferable skills? If the value of your degree would be negligible at a non-top-tier school, then what is the point of even pursuing it?" Uhhhh, I don't know ... knowledge? We live in one of the few cultures in the world that has the ideal of pursuing happiness – not industry, not wealth – built into its national character, and yet we increasingly treat the notion of educating ourselves in how to be well-rounded, sentient beings as a pointless expense. And learning for its own satisfaction is all but laughed at.

If you're talking about what degree programs will most likely get you the highest salary, I understand pointing and saying, "Here's where the money is." I even comprehend that different kinds of training and different jobs have different financial values. What I am tired of, however, is the near constant message that those of us who haven't had the inclination or ability to pursue the study of those more lucrative things are big fat failures who threw away our college educations on meaningless frippery like literature and social justice. My writer friend Fawn puts it this way: "I'm fed up with those trend stories saying that anyone who doesn't make the big bucks is a loser."

In college, I studied film and took a detour in Dublin to immerse myself in a program of Irish history and literature. If you're looking for perspective on "useless" educations, I may not have written the book, but I can definitely produce a detailed critical analysis of it. I have never been well-off and likely never will be. Yet I somehow manage to do work I love, have a happy, reasonably balanced life, and can occasionally toss out a joke about the inscrutability of "Finnegans Wake." Yo, I'm fine.

I want my kids to be fine too. When my older daughter was looking at middle schools, we visited one prestigious public school that boasted of its intense test prep and how it would prepare our children to be competitive in the global workforce. Lucy was 10 at the time. We went to another that vowed the students would always be doing math and science one year above their grade level, but not to stress, because on Fridays the kids would have "fun" classes like art and music.

It's funny, because I know a lot of people who've spent their adult lives building successful corporate careers, but I only know a very small handful who've been able to support themselves with their art. Art is not easy. To make something beautiful -- a song, a book, a painting – takes effort. To be able to make that your job takes incredible skill and dedication. Even Barack Obama, after his art history dis this winter, apologized to an offended professor by admitting that the subject has "helped me take in a great deal of joy in my life that I might otherwise have missed." So spare us the hobbyist condescension, thanks!

Perhaps because she did wind up at a school that focuses on humanities and independent study, my child is now doomed to a future as college debt-riddled, smartass barista. But maybe not. Last month, the Fiscal Times reported on a new study from the Association for American College and Universities that pronounced that "Students who study the liberal arts do about as well as most college graduates in terms of annual salaries and employment rates." I believe it. I have plenty of friends who had liberal arts educations. Some of them went on to pursue their fields of study for their careers; others went on to business and technology. None of them seem to have been especially crippled in life because they know who Aristophanes was.

Journalist Celeste Headlee, who has a master's in music, says that her education "taught me how to stand in front of a crowd with poise and articulate my thoughts clearly, in a way that others can understand. I can't tell you how many smart people can't influence others because they're nervous, inarticulate, or just plain boring." My attorney pal Jessica echoes that, saying, "My theater degrees gave me the best possible skill set a lawyer could ask for." Etsy CEO Chad Dickerson, a self-described "proud English major," says, "Understanding human dynamics will take you way farther than writing code (though both is a killer combo)." As he's said in the past, "Being successful in a modern society requires a broader understanding of humanity and people." My friend Ben, another English lit veteran, adds, "Any body of knowledge you absorbed about tech and business as an undergrad is now largely obsolete anyway. You couldn't have studied for what our jobs are asking of us." And a former CEO pal with a BFA says, "In the labor world, I could relate to people who worked with their hands for a living -- many don't respect that kind of work. In the political arena, my education helped with negotiations and fundraising, because I focused on the process and not the result, and it was never complete."

When an educational system is a factory that efficiently grinds out global competitors, you may well produce a large number of people making nice money and contributing to the economic success of the companies they work for. But when your educational system also cherishes humanities, you create more thinkers and questioners. You teach people to value themselves beyond their work identities. You illuminate the human condition and cultivate compassion and service and communication. You don't wind up putting people on a track when they haven't been taught to wonder whether they even belong on that track, or where it's going. I know, crazy talk! Or as my friend Laura, who holds an impressive three degrees in theater and has an actual paying career in theater, says, "Eff the corporatization of higher ed. It's a great way to kill off all ingenuity and spirit in the country so we can all be like the line of workers headed into the machine in 'Metropolis.'"

There are a lot of other ways to measure what Business Insider calls "success" than in job titles and salaries. In college, my friend Adam had to choose between acting and law. He opted for the former and now says, "I've performed in 41 states and seven countries … and I wouldn't trade those experiences for all the money in a Candy Crush IPO." And my friend Rose, who's currently studying comparative literature after a long business career, says, "The fact that I can share my passion in a classroom, in my writings and research, and know that sharing knowledge in any way, shape or form makes for a more enriching life and gives back to the community at large? That’s worth something."

I have nothing but boundless admiration for the people who've studied and pursued technology, medicine and business because that's what they're good at and that's where their enthusiasms lie. I lack skills in all of those arenas to a truly hopeless degree, and the fact that there are people in the world who grasp those concepts is beyond my feeble comprehension. But I'd really appreciate it if schools and the media and our snottier acquaintances with bigger houses would tone it down with the reductive and inaccurate assumption that having more money means you got a better education. I may suck at math, but that's just terrible calculation. The value of an education is how well it trains you to think for yourself, including about what you really want to do with your life, and what you truly value. Or as a friend with an MFA – who just, by the way, moved into a higher tax bracket – puts it, "If you want stability, go with a degree that provides a predictable life path. If you want to face your fears and do what you love, it might require a bit more work, but has the potential to be much more satisfying." And the return on that investment is priceless.