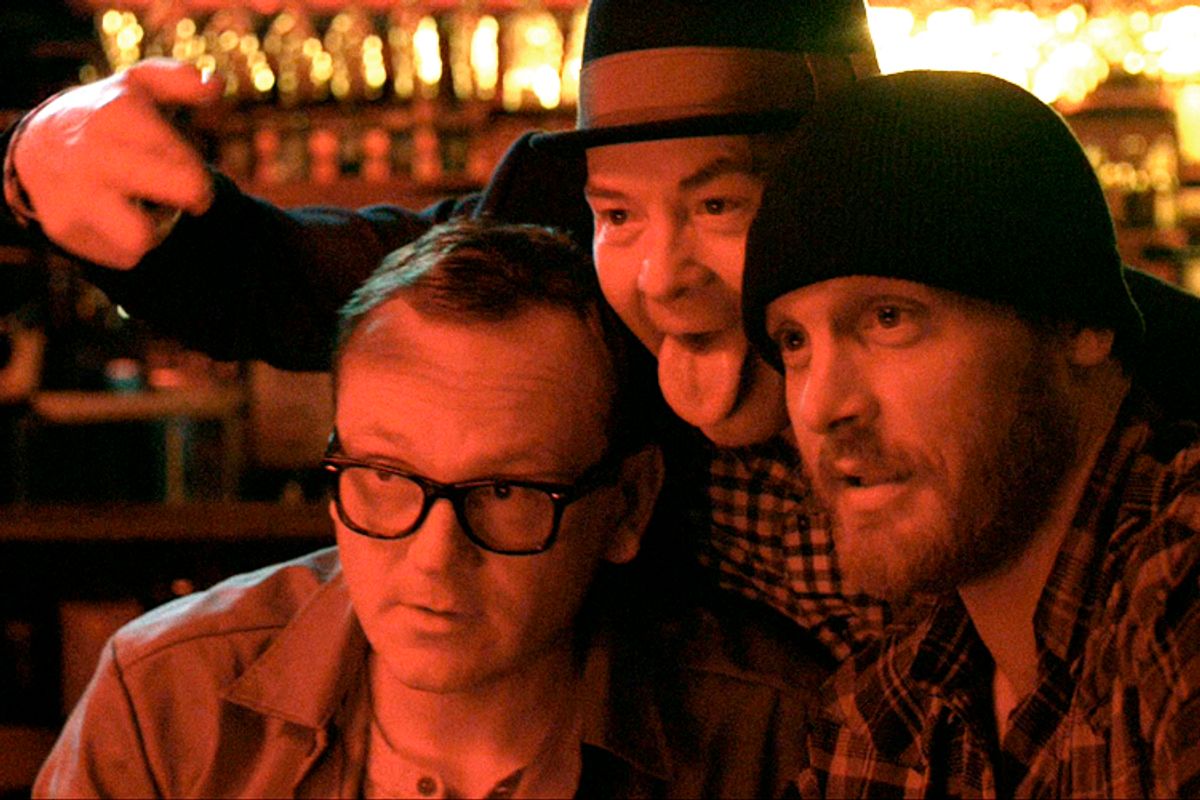 This whole evening is “kind of like a TV reality show,” explains Colin, the pork-pie-hatted hipster dudebro played by David Koechner in E.L. Katz’s nasty and delightful indie “Cheap Thrills.” “You know, where people have to eat animal dicks or whatever.” That’s it exactly, although worse things than penises will be consumed during the course of a long night that begins at an L.A. dive bar and ends in Colin’s house in the Hollywood hills. Of all the diabolical characters in literature and film, Colin is one of the friendliest, and the pitch-perfect performance of Koechner, a versatile comedian and actor best known for his supporting roles in “The Office” and the “Anchorman” movies, is one of the best reasons to see “Cheap Thrills.”

This movie is the subject of what may be an unreasonable level of hype in a certain movie subculture, thanks to the marketing genius of Drafthouse Films and its impresario, Tim League (who has vowed to let any moviegoers who don’t like it slap him in the face). It’s basically a four-hand midnight movie in a ‘70s-‘80s grindhouse vein, halfway between Martin Scorsese’s “After Hours” and an off-off-Broadway play. But I’m not saying that’s a bad thing! Katz’s direction is capable and unfussy (from a script by David Chirchirillo and Trent Haaga) and the cast is outstanding, especially Koechner and Pat Healy, who plays the likable, unemployed protagonist named Craig, lured by financial desperation into Colin’s increasingly sinister high jinks.

Colin is a fully recognizable and halfway appealing urban type – the drug dealer, the party dude, the guy who’s smart enough to fake a conversation on a wide range of topics (“I seriously think about that kind of shit all the time!”) and whose debonair demeanor (and endless supply of narcotics) attract other guys like honey-covered catnip-ganja brownies slathered in sex sauce. Colin has a mysterious amount of cash, an endless line of bullshit and a hot but nearly affectless girlfriend named Violet (Sara Paxton), who’s along for the ride but mostly not involved in the action, until she is. Violet remains more of an idea than a fully fleshed-out character; I think we’re supposed to believe that she’s driving events forward to a significant degree, even though Colin does all the talking.

It’s Violet’s birthday, and Colin’s decided to give her one hell of an evening, which starts out by dragging Craig and his old friend Vince (Ethan Embry) over to their table for a few relatively innocent pranks: Drink this shot of tequila first for $50, get that woman to slap you for $100, do this big fat line of coke right out here in the open. What we don’t know is how much Colin may understand about the tentative relationship between Craig and Vince, or the fact that Craig is a frustrated writer with a wife, a baby and no job, while Vince is a low-life loan shark who dreams of the big score. Colin, as things will turn out, is the big score, at least in the context of Vince and Craig’s sad-sack lives. In terms of his own life – well, we just don’t know, but the stacks of $100 bills he waves in front of the hypnotized duo presumably won’t bankrupt him. He mentions at one point that he’s also got a house on the water in Palos Verdes and a Malibu beach condo; this one, with its jaded-porny-ethnic collection of vintage tchotchkes, is just for Violet’s amusement.

So does “Cheap Thrills” have a social conscience? Hell, I don’t know, and the question didn’t much occur to me while I was watching it. The central question of the movie isn’t just how much humiliation and self-mutilation Craig and Vince are willing to endure for money (personally, I’m not chopping off my little finger for anything under $100,000). It’s also which of them has the moral fiber to say no, to say, in effect, that the ordinary humiliations of making a living are preferable to the spectacular, short-term humiliations inflicted by this vague and cheerful nightclub Mephistopheles. I could try hard to make this a parable about modern life instead of a devious and well-executed exploitation flick. Let’s just say it takes a dim view of human nature that seems well supported by the evidence, and that if you have an appetite for fatalistic, dirty-minded gore you won’t be disappointed.