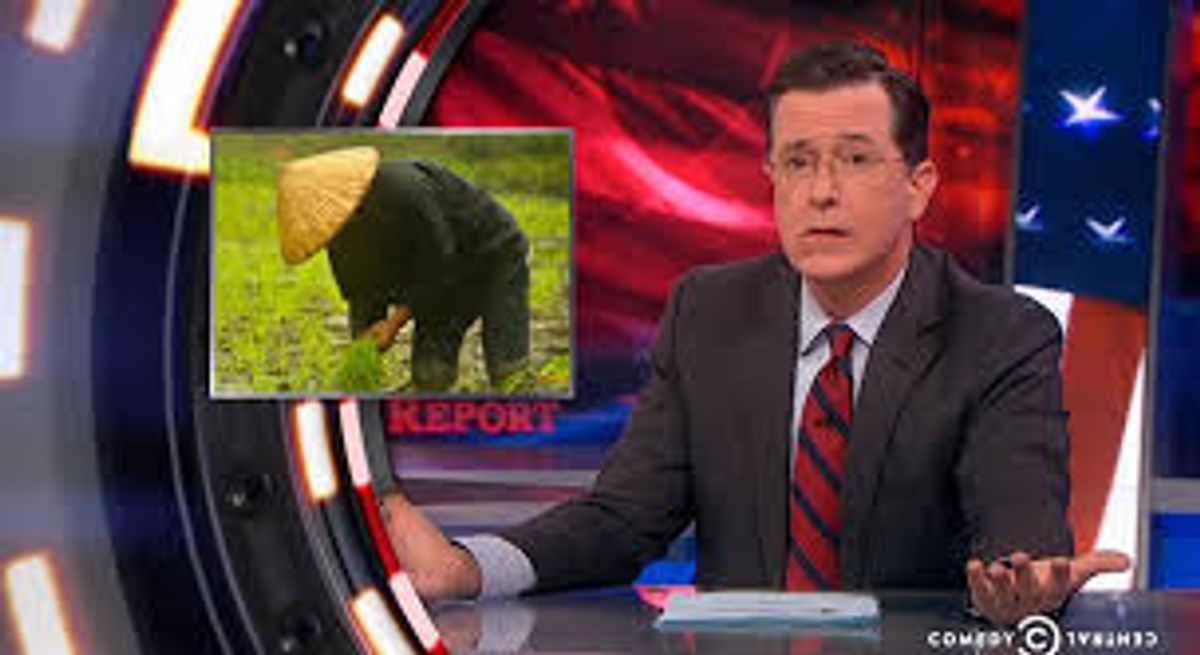 Stephen Colbert has created hugely successful satire premised on the persona of a right-wing political commentator and gun-toting, xenophobic red-blooded American on “The Colbert Report.” But a recent tweet, taken out of context from a segment mocking Washington Redskins owner Dan Snyder, has ignited a fierce debate about the boundaries of satire.

The tweet, since deleted, read: “I am willing to show #Asian community I care by introducing the Ching-Chong Ding-Dong Foundation for Sensitivity to Orientals or Whatever.”

It was part of a larger quote mocking Snyder’s Washington Redskins Original Americans Foundation, a charity that Snyder started to help Native Americans, a tone-deaf appeal to a community that has objected to the football team’s name, a racial slur.

To make his point in the segment, Colbert created the “Ching Chong Ding Dong Foundation for Sensitivity to Orientals or Whatever,” a joke that heightens the absurdity of Snyder’s Foundation by replacing one racist name with one that is, while just as insensitive, not one a football team would ever imagine using. The joke maintains a sense of self-awareness as it does so (the “Sensitivity of Whatever” part).

But in the segment, Colbert built the punch line upon a cringe-worthy depiction of a “Chinaman” that went on for long enough to wonder if the humor in the segment was derived from Colbert’s mockery of Dan Snyder, or his actual impression and its finely crafted puns at the expense of Asians. As Brittney Cooper, generally a fan of Colbert, wrote for Salon, “By using language that seemingly sounds like how Asian Americans talk, Colbert’s bit communicated absurdity but also seemed to suggest that all Asians really do speak this way.”

The segment was not Colbert’s best, and it’s easy to see how the bit “reinforced stereotypes,” for some viewers, like Park. But when Park called to #CancelColbert, she unhelpfully lumped Colbert in with the likes of racist trolls, like Fox News and Pax Dickinson. Canceling or boycotting “Colbert” alienates a voice who has long been a progressive ally for social justice, and one who has built a career pointing out the absurdity of intolerance.

Can someone who is usually on target make a joke that oversteps its bounds? Sure. We’ve seen that with the Onion, for example, but judging from the reaction of Deadspin writers Tommy Craggs & Kyle Wagner, who, like Suey Park, are Korean-American, there’s room for debate on whether or not the “Colbert” segment was effective as satire.

But “Colbert” could have avoided this controversy altogether -- or significantly reduced it -- by having some diversity on its staff, which is currently all white and almost all male. It's worth noting that this is something that the “Daily Show” does well with its correspondent format, in which Jessica Williams and Aasif Mandvi have tackled issues of race that could easily have been offensive to non-white viewers otherwise. In one segment talking about the racist backlash against Indian-American Miss America, Nina Davuluri, for example, Mandvi made references to arranged marriages and getting Gupta’ed (point taken).

With more non-white people, more women, more LGBTQ people, more people who are just not straight white dudes, the humor expands to become more inclusive and original. More people will be able to say, “Hey, maybe this is not the best way to present X,” or "This sort of bothers me and might alienate other people, too." We routinely see edgier stuff coming from diversity in television, and as audiences, we’re less confused about whether what we’re watching is punching down on a minority, or punching up on a minority’s behalf.

What can “Colbert” do right now? In addition to hiring some women and people of color, he could talk to Park on his show and settle this debate for the rest of us.