An expert explains what to expect from the new U.N. climate report 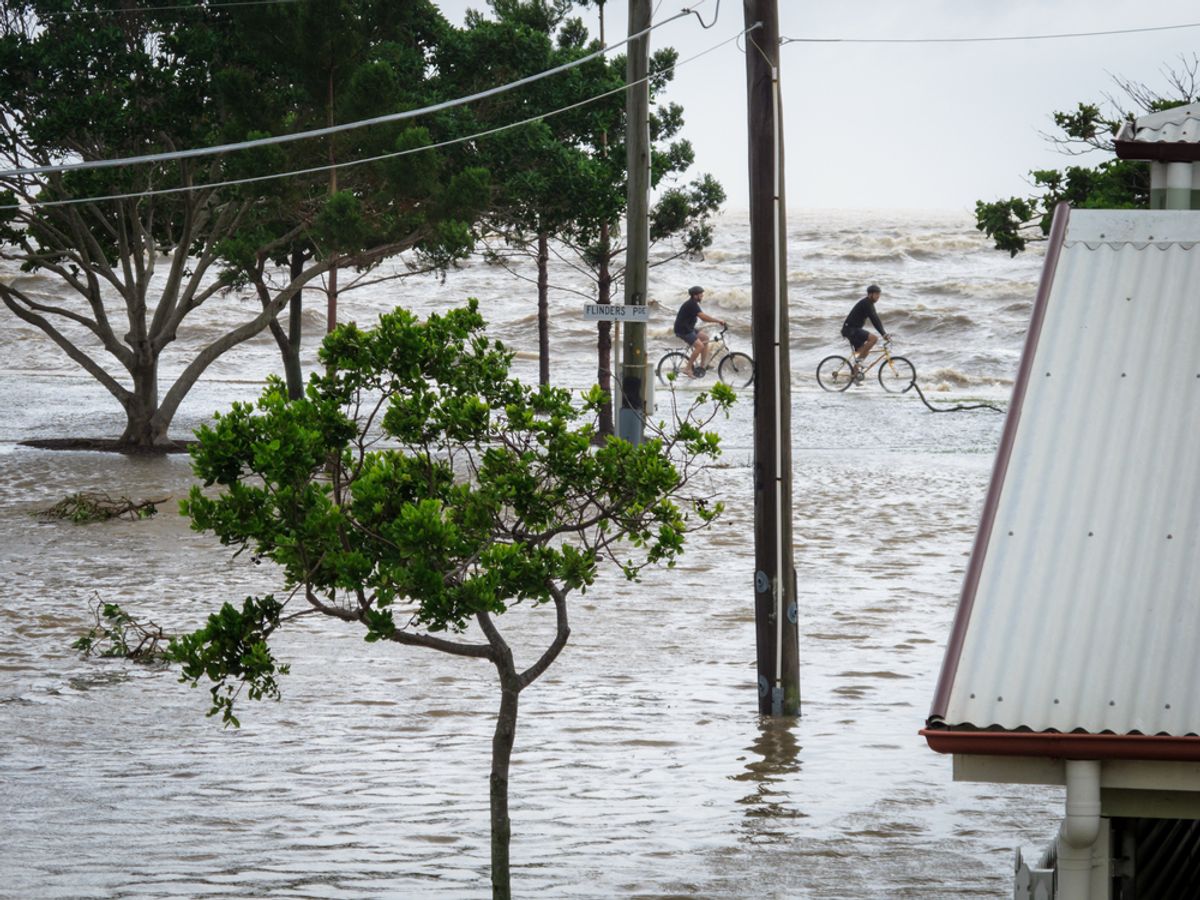 A pair of cyclists ride along the sea wall during the storm surge floods in Brisbane, Australia on January 27, 2013. (Silken Photography/Shutterstock)
--

Monday, the U.N.'s Intergovernmental Panel on Climate Change is set to unveil the latest installment in its fifth assessment report. The last one focused on the science behind climate change; this new, 29-page report will detail its impacts, along with what we can do to minimize and adapt to the worst of it. Early indications suggest that the consensus will be cautious, but insistent: The effects of climate change are real, and we're experiencing them now.

Salon spoke with Forbes Tompkins, a meteorologist and research analyst with the World Resources Institute, to learn what we can expect -- from this latest report, and from climate change itself. The details, he said, will likely be frightening: There's no denying any longer that climate change is having a widespread and significant impact. The scariest outcome, though, is what will occur if we fail to act.

If there's one thing the report should do, it's to convince us that our need to do so is urgent.

The new report warns that we’re already feeling the effects of climate change. What are some examples of that? What are things we can point to and say, “These are the things that are happening now?”

We are seeing a gradual increase in the trend of extreme weather events that is causing a lot of impacts globally and within the U.S. We’re seeing water resources becoming more scarce and impacts to ecosystems and human health. There’s reduced snowpack out West in places like Salt Lake City, Utah. And sea level rise is having a global impact, but especially here in the U.S. in places like southeast Florida, Miami and Hampton Roads, Va. The impacts are everywhere.

There’s some debate over whether the California drought can be attributed to climate change: President Obama has suggested as much, but others say we aren’t really sure yet. To what degree are we able to say that it’s an effect of climate change?

With individual events, there are various assessments that go into greater detail. But, as far as what we can expect from the IPCC and what the consensus science is, climate change is likely to lead to increased occurrences and intensity of extreme weather events like heavy rainfall, droughts, warm spells, storm surges, heat waves and sea level rise.

So while the jury is still out for this drought, there are droughts in the recent past, such as the Texas drought in 2011, where it was found that conditions, as a result of climate change, made it 20 times more likely for a drought of that magnitude to occur today as opposed to, say, the 1960s.

So climate change is making the odds a lot worse.

It’s amplifying extreme weather events that are already occurring. It’s like a baseball player given steroids. There’ve always been home runs, but if you look at the steroid era in the '80s and '90s, there’s a clear record of increases in home runs. There might have been a year where there were fewer runs than the average, but for that era there’s a clear increase. Climate change is having a similar impact on extreme weather.

I wonder if you could comment a little bit on the extremely cold and snowy winter that we’re still going through. What’s the best way of looking at that in a climate context?

That’s a great question. And a complicated one. What’s important to keep in mind is that even with the recent cold months or weather that we had here in the eastern third of the U.S., the U.S. itself only takes up 2 percent of the world’s surface area. So while we had just a few months of cold weather, there has still been unprecedented warming, and 2013 still managed to be tied as the fourth or sixth warmest year -- depending on which source you go by -- on record.

There is emerging science about arctic amplification -- which deals with oscillations in the jetstream -- and that could be the result of the warming that’s going on in the Arctic, which is twice as much as the global average.

So warming could actually be responsible for what we’re perceiving as the cold winter?

It’s an evolving science in the last decade or more, so it’s something that needs to be better understood. But recent events and trends dealing with this type of wavy, snakelike jetstream are consistent with some of the latest science coming in. [Ed.: More on that here.]

Going back to the report, what are some of the things that scientists are more confident will happen in the future, specifically the near future? And what are the things they’re more uncertain about?

As far as future impacts within the U.S., there’s a clear understanding that various forms of infrastructure are likely going to be impacted by climate change. We can expect to see impacts to energy infrastructure. A lot of the infrastructure throughout the U.S. was made for climate and weather events that were occurring a hundred years ago. So there are many that are vulnerable and not well equipped to deal with today’s climate.

The wildfire risk is likely to increase through various parts of the U.S. We can expect to see in the report some of the Western portions of the U.S. mentioned as having an increased wildfire risk due to climate change and drier conditions. And sea level rise is one of the most conclusive impacts of climate change that can lead to more urban flooding in coastal areas, as well as extreme precipitation events. Since the late 1950s, every region in the U.S. has seen an increase in heavy precipitation events. The Northeast has seen even a 74 percent increase. And that’s consistent with a trend we can expect into the future for a number of regions.

The science is definitely still evolving. And as far as what we need to do, we could refine more our cost estimates of implications for the business-as-usual track that we’re on, which goes well beyond 2 degrees.

What is the overall consensus on catastrophic change? In other words, how bad is it going to get, and how assuredly can we say that?

It’s important to understand that our goal, adopted by the U.N. Framework Convention on Climate Change, is to limit warming to 2 degrees. And if we achieve that goal, we will do well to limit the chances of catastrophic events. We’re already seeing impacts of climate change now, but that is a sound goal that we should strive for.

As far as the track that we’re on -- the results that will be likely in the upcoming report will be scary to a lot of people, because of where this could go. It’s sobering information that should create urgency to act now, so we can best minimize those impacts in the future.

Greenland’s ice melt is a key concern: If we reach a tipping point there, with a certain degree of warming, that could cause sea levels to rise and have irreversible impacts for the next millennium. There’s also a widespread risk of species extinction. There is concern that some regions will become uninhabitable at the upper bounds of warming that we could see.

So far as U.S. policy goes, and what we’re doing to mitigate this risk -- how are we doing? Are we anywhere close to where we need to be?

There are definitely a lot of challenges, especially within the U.S., regarding climate policy. At the local level, we’re seeing some really encouraging developments with local governments, such as the Southeast Florida Regional Climate Change Compact. It’s a bipartisan agreement between four counties in southeast Florida that have accepted climate change, and are dealing with the impacts, and are trying to minimize them moving into the future.

And at the federal level, the President’s Climate Action Plan has a lot of great elements to it that can reduce emissions moving into the future -- which is absolutely essential. Support for local action and local governments through the Task Force on Climate Preparedness and Resilience is also encouraging, as is the proposed billion-dollar budget to fund climate resilience.

Is the report likely to indicate that more needs to be done, or that specific things still need to be done?

The report is likely going to outline things that need to be done with adaptation. We’re at a point now where -- and I think the report will say this as well -- adaptation is essential given the impacts we’re already seeing today, but there needs to be dual implementation of preparing for climate impacts and reducing emissions moving forward.

Working Group III, the final of the three working group reports that’s going to be released April 13, will outline a number of policy measures, especially with respect to curbing greenhouse gases.

Can you talk a little bit about how we can balance both preparing for climate impacts and reducing emissions?

You have to have both, because if we adapt to the impacts we’re facing now, and we do nothing to cut emissions going into the future, a lot of those levels and measures of adaptation will be rendered ineffective at some point. So, from a cost-effective standpoint, there really needs to be dual implementation that can address both simultaneously. The more we warm, the more it’s going to cost us to adapt or to cut carbon. So the longer we delay taking action, nationally and internationally, the price tag goes up.

One of the criticisms that environmental groups have had concerning Obama’s climate plan has to do with his “all of the above” approach to energy, finding room for some fossil fuels in our energy mix. The argument is that that greatly underestimates the problem, and we need to be doing more to mitigate right now. Would you agree with that?

His Climate Action Plan, in general, proposes a lot of measures that cut emissions. It starts us down a path to beef up our usage of renewables so we can lower our dependence on fossil fuels, while shifting energy supply toward less emitting fuels of any kind. This shift coupled with increasing energy efficiency can play a big role in reducing emissions as well.

What, in your opinion, is the most important takeaway from the report?

So in a sense, in the past impacts of climate change were thought to be at our front doorstep. Now they’ve pretty much taken up residence for the foreseeable future until we address the issue.