In support of #CancelColbert: Why Stephen Colbert needs to make this right

I’m a Colbert fan and know he was trying to expose the absurdity of slurs against Natives. But here’s why it failed 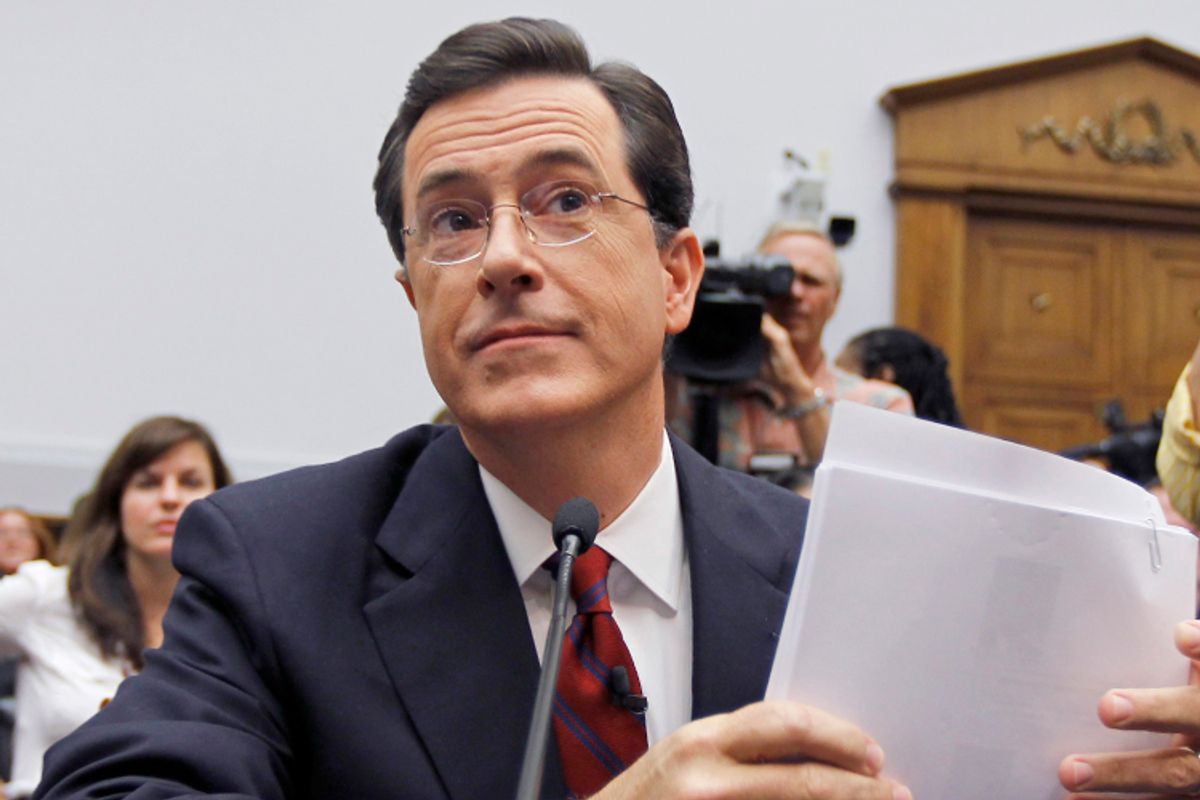 "The Daily Show With Jon Stewart" and Stephen Colbert’s "The Colbert Report" arguably offer the most honest commentary that we have on the constant chicanery and racism that are contemporary right-wing politics.  I tune in to each show almost daily.

So I was deeply disappointed to see a tweet from "The Colbert Report’s" Twitter account, excerpted from a show earlier this week, that read “I am willing to show #Asian community I care by introducing the Ching-Chong Ding-Dong Foundation for Sensitivity to Orientals or Whatever.” The statement came from a longer bit on the show where Stephen Colbert rightfully and scathingly satirized Dan Snyder, the owner of Washington's professional football team, for minimizing and dismissing the concerns of indigenous people who find the team’s mascot a slur.

I sent a few #CancelColbert tweets in solidarity, making it clear that racism (and ethnic insensitivity and Orientalism) is simply unacceptable. And I was most disheartened to receive several tweets and Facebook replies from black people defending the show. Though none of them used the word, the gist of many of the replies was to explain to me that the tweet was part of a satire -- a satire meant to critique racism -- and as such, the show shouldn’t be canceled, because Asian Americans were just being hypersensitive and overreacting to something designed actually to help.

How soon we forget!

I get the impulse from black people and those on the left to defend the show. As I mentioned, Colbert really has some of the best race commentary that we got going in this country, and to lose that commentary would feel like a real loss. But we should be clear: A blind defense of Colbert and his show is absolutely reactionary and impulsive. And African-Americans above any other group in this country should know better.

I love good comedy. Chris Rock, Anjelah Johnson, Erin Jackson and Aziz Ansari are among my favorites. Comedy is a great medium to do race critique because it helps us all take ourselves less seriously. But we should be clear that embodiment matters. Stephen Colbert is a white man and that means there have to be boundaries. In this bit, and with his character Ching Chong Ding Dong, he used slurs against one group to shed light on the absurdity of slurs against another group.

But white people do not have a history of being devalued as white people on the basis of the slurs. Yes, Irish Americans, Italian Americans and Polish Americans in the late 19th and early 20th centuries were frequently the object of ethnic epithets and discrimination. But as those groups “became white,” whiteness itself became what Cheryl Harris calls a form of property, a protection against racial devaluing. So when Colbert, a white male, uses these slurs, even in the mode of critique, he steps into incredibly muddy water, and surely cannot expect to come out unsoiled.

In other words, I’m saying that though the bit was intended to critique racism, it failed. Yes, Colbert was spot on in his analysis of the ridiculousness of Dan Snyder’s “Original Americans” Foundation. But to paraphrase one of my Twitter-locutors, Chris Robinson, you can’t make Asian people collateral damage on your way to proving a point about racism toward Native people.

And what we should understand is that as satire goes, there is the thinnest of lines between critiquing racism and reinforcing or reinscribing those very stereotypes. Remember the 2008 cover of the New Yorker, called “The Politics of Fear,” that attempted to satirize the range of racist mischaracterizations of the Obamas. It communicated the absurdity of those stereotypes, but did not communicate an alternative narrative, that would effectively combat the stereotypes at hand.

I tend to feel similarly when I watch Chelsea Handler’s endless quips about black men with big penises. I get that she is attempting to satirize white women’s fetishization of black men. But most often, it feels like she’s reinforcing the stereotype.

Let us not forget that Dave Chappelle walked away from a most lucrative career because he saw that his attempts at satirization were lost on his white audience.

The same thing is at play here: By using language that seemingly sounds like how Asian Americans talk, Colbert’s bit communicated absurdity but also seemed to suggest that all Asians really do speak this way.

So all morning, I’ve been thinking about why I saw so many African-Americans identifying with and defending Colbert rather than identifying with Asian Americans. To grow up in America is to receive racially problematic and stereotypical ideas about people of color almost by osmosis.

Our history in this country should make us eager to stand in solidarity with other groups – Natives, Asians, Latinos -- who are wronged by racism. (And no, I’m not talking about reverse racism, which isn’t a thing, white people. I’m talking about the racially problematic attitudes that the system of white supremacy has created.)

We should never be the ones even remotely insinuating that someone is being hypersensitive about racism. We know how wrong it is and how dismissive it feels when people say it to us.

If Colbert had used the N-word instead to prove his point about Natives, we would have been outraged. And we would have seen #CancelColbert as the only appropriate response. Yet, many of the folks I dialogued with felt that calls to cancel the show were too much, and suggested that an apology was more appropriate.

One, we never get to tell the harmed group what the proper response to racial injury should be for them. Two, rather than critiquing the strategy, why not simply send a tweet or email demanding an apology? Solidarity is rarely simple, but choosing not to minimize someone else’s struggle is quite easy.

We have to learn ways to be in solidarity with one another. Increasingly, racism does not follow a simple white-on-black schema. And while I’m well aware of the pervasiveness of anti-black racism among all groups including Asians and Latinos, I also know Orientalism (Edward Said’s term) when I see it. And it is unacceptable. Black folks should be against all forms of othering, ethnic insensitivity and racism. Period.

#Blacksplaining away another group’s racial injury is not the business. (Seriously, let’s not make #blacksplaining a thing. It sounds perilously close to “backspinning” and backspinning on racism diminishes our moral authority.)

Even though Stephen Colbert did not send these tweets, did not create this firestorm, he supplied the kindling through that poorly thought out bit. Good racial comedy is a kind of race work, and race work requires care and diligence. Stephen Colbert’s carelessness caused harm, and he should make it right.