The troubling reason Americans are so depressed

Our unhappiness can be traced to feelings of "learned helplessness" -- and corporations, in part, may be to blame 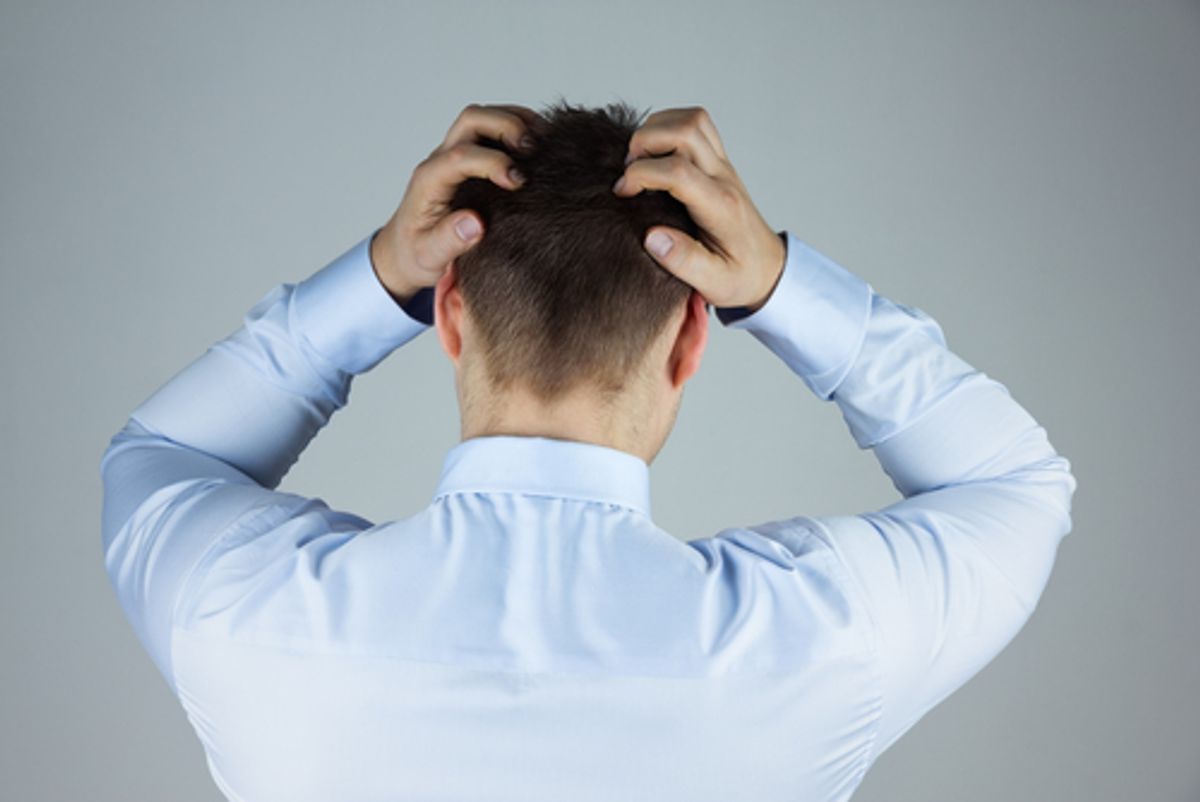 We are a nation on hold. We wait endlessly for everything. Some of us are forced to wait in physical lines, but increasingly these queues are electronic or digital. We can’t get answers to our questions or obtain help with important problems from the huge corporate entities that sell us insurance, mortgages, medications, airline tickets, computer hardware and software, phone and cable service, and even direct medical care. The toxic result of this increasingly intolerable system of phone queues, Muzak, and long waits is helplessness. But like the frog that doesn’t know it’s being cooked because the temperature of the water rises slowly, these particular feelings of helplessness have become so ubiquitous that they seem normal. Waiting just seems like the way the world is and the way it’s supposed to be.

Helplessness is the most destructive of human emotions. Human beings respond to helplessness with depression or, more commonly, rage. The Tea Party exploits these feelings of helplessness by tapping into this rage — blaming government and scapegoating liberals and the poor. Their narrative suggests that everyone but them gets help. Rather than receive support and respect, they feel that they get the cold shoulder or are pushed around. They have to wait in line and their place always seems to be in the back.

This narrative may be wrong and mean-spirited, but the helplessness from which it stems is real. Our lives are shot through with things we can’t control, from job opportunities, workplaces, health care, schools, to politicians beholden to special interests.

But while we fight against the causes of these major forms of alienation, let’s not forget those small but ubiquitous instances that riddle our lives and contribute to a culture of helplessness; namely, the various ways that we all have to wait, endlessly wait, to get information and help from those institutions upon which we’re dependent. Waiting, often on the phone, drives most of us crazy. Such experiences don’t get featured in the New York Times, but they nourish the soil of powerlessness and rejection in which right wing ideologies can grow.

However much we consciously accept our helplessness, this feeling breeds an underlying frustration which results in either depressive resignation or anger. To be sure, these are intensely personal reactions, and their malignancy varies greatly depending on personality type and degree of exposure. But all of us feel them. And they both mirror and amplify all the other ways that we’re unable to exercise any real control over our lives.

Having accepted the helplessness attendant on waiting in phone queues as a natural part of modern life, our frustrations may temporarily focus on one or another company or institution (“I hate ... X”) but, because of our dependence, we ultimately resign ourselves to the indifference of bureaucracies that make us wait. We often take our frustrations out on the lowest level of clerk, technician, customer support rep, or agent, but don’t ever form a clear picture of the real culprits above them in the corporate food chain. Americans don’t tend to blame the CEOs, Boards of Directors, shareholders, and upper management responsible for allocating their resources to maximize returns on investment rather than take care of their clients. These people — the real culprits — are relatively anonymous and become part of what we accept as the inexorable forces of the market over which we have no control. There’s no “there” there.

Since people are also frustrated by public institutions, politicians become the obvious targets. We can see them. We can, therefore, love or hate them, real people with real names and faces. They have become the most visible targets of our frustrations and from the poison that flows from our helplessness.

It makes sense, then, that, if people are otherwise disposed to resent government, some of them unconsciously fold these personal moments of waiting, of bureaucratic and technological helplessness foisted on them by unseen people, into larger complaints about being victimized by people they can see (and are helped to see by conservative media and ideologues) — in the public domain, namely, liberal politicians, ginned-up images of people buying lobster with food stamps, Obama, and the “bureaucrats who run Washington.”

Extreme conservatives can enact and displace their pent-up frustrations onto people they can see on television and hear about on right-wing radio — those damn socialist politicians like Obama or the (obscene) depictions by Fox News of poor people living high on the hog. They can share these frustrations with others, and form communities of meaning and purpose. In so doing, they can feel like they have a bit of agency — and all in the service of getting the “bad guys” out of office and replacing them with fresh faces who promise to take care of their interests, to move them up to the front of the line. Obviously, liberals also suffer from identical forms of bureaucratic indifference, but for those already predisposed to resent and scapegoat those government entities that affect their lives, frustrating interactions with corporations serve to fuel those resentments. The helplessness experienced in public life both mirrors and conceals that experienced in private life.

Bureaucratic indifference and the attendant helplessness it creates are corrosive to the spirit. Ultra-conservative ideologues, as well as right-wing evangelicals, prey on such feelings and, unfortunately, have a lot of targets in the public sphere that take conscious precedence over the subtler injuries endured in the private sector. One only has to look at the frustration, often legitimate, at the clumsy roll-out of Obamacare to see a classic instance of this kind of displacement. It’s not that some of their critiques of the Affordable Care Act haven’t been legitimate; it’s just that they’ve been used as a fig leaf, not only to attack Obama, but to distract people from other, more profound, arenas of helplessness.

It would be a mistake to trivialize the importance of these frequent instances of bureaucratic indifference and understaffed or incompetent “help” centers on the emotional well-being of consumers. Last week, for example, I experienced a version of this that was by no means extreme or special. I spent about seven hours on hold with various companies, waiting for help from my health insurer, bank, computer technical support, and phone company. Seven hours is almost a full workday. I was able to make some of this time minimally productive by using a speakerphone during the hold-time. On other occasions, however, the experience simply put a painful crimp in my neck.

Everyone has experienced this scenario — endless loops of chipper voices informing us to “listen carefully because our menu has changed,” that “due to higher than normal call volume, your wait may be longer than expected,” and then “we will answer your call in the order received.” Often we reach the wrong department because the phone menus are confusing and we get sent elsewhere only to find ourselves waiting in yet another queue. We get contradictory information and advice. Customer and technical support departments are so huge that it’s impossible to follow-up or follow through with any individual. They can theoretically call us back if we’re accidentally “disconnected” but we can’t reach them. And, frankly, sometimes we’re supposed to get help from someone we can’t easily understand.

Other times, we’re cheerfully redirected to relevant websites or online chat specialists, although such options are often much worse. Often, we have to repeat the same information four or five times or spend time setting up an account or trying to retrieve ancient information and passwords connected to accounts we already have. Usually the “user interface” — the ease of use a website offers its customers — is confusing at best. I once spent one hour trying to find online technical information for a special AT&T device and finally had to get AT&T technical support to tell me how to use their website!

These stories are legion. The helplessness they engender has infected everyday life.

The reason that it’s so important to understand the personal and social implications of helplessness is because it often leads to destructive and self-destructive action. Prolonged experiences of helplessness are almost always traumatic. They are especially malignant when they seem normal. Psychotherapists see instances of this damage up close every day because helplessness is wired into the very nature of childhood. Because of our helpless dependence on our caretakers, their dysfunctions become our dysfunctions. We don’t have a choice. When people don’t have a choice, they adapt to the status quo and if that status quo is pathological, they become pathological as well. And they can’t and don’t object because it’s the only thing they know.

Psychologist Martin Seligman found that the roots of depression lay in what he called “learned helplessness,” the repetitive experience people have of human environments that don’t respond to our needs and desires. The evidence is everywhere around us. When nursing home residents are given choices about the most trivial aspects of their environment, their physical decline slows down. Authoritarian political regimes breed resentful passivity. When labor unions arose and gave workers a sense of agency and power, their mental as well as economic health improved. When workers are able to exercise agency, they are happier and more productive.

Helplessness is a scourge and it is on the rise in America. And every time we spend two hours waiting for customer support, it’s like a little drop in the bucket of helplessness that is threatening to overflow.

The telephone nightmares like the ones I experienced feel private but are actually social and political. The reason is that frustrating hours on the phone are not an inevitable consequence of our increasingly technological society, but, instead, are the obvious results of corporations putting their bottom line above the care and dignity of their customers by not hiring enough competent people to deal with the problems — perhaps inevitable ones — with their system and/or technologies. Government bureaucracies could do a much better job, too, but, in addition to indifferent or incompetent personnel, they have budgetary limits they can’t control. Private corporations, however, could easily expand their customer and technical support departments if they wanted to sacrifice a tiny portion of their profits. You don’t have to be a rocket scientist to know that insurance companies, airlines, telephone and internet providers, banks, and most merchants scrimp on providing consumer support because they don’t want to spend the money it requires. In fact, for some, their systems are covertly designed to make the caller give up!

Too often we look at our everyday experiences as if they were a fact of nature, just something we have to live with. Such is the case with waiting. But the types of waiting that try our patience today are as much consequences of human calculation as they are necessary facts of our increasingly technological lives. Shakespeare once wrote, “A very little thief of occasion will rob you of a great deal of patience.” We are being robbed of our time and our sense of agency in ways both big and small, and the consequences are political as well as personal.