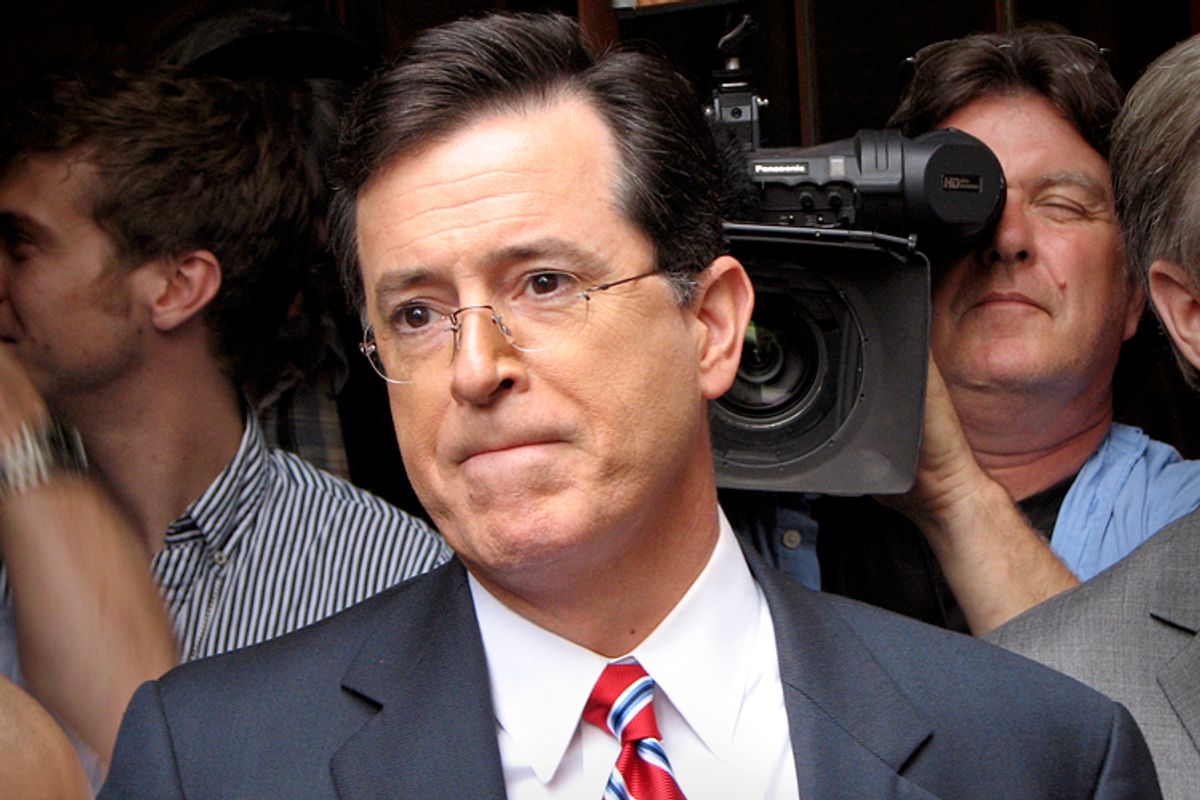 A tweet was issued from @ColbertReport yesterday that immediately drew the ire of a digital, vocal minority. The tweet, which has since been deleted, said this:

I am willing to show #Asian community I care by introducing the Ching-Chong Ding-Dong Foundation for Sensitivity to Orientals or Whatever.—

The immediate backlash was spearheaded by young activist Suey Park who created the hashtag #CancelColbert as a way of galvanizing the twitterverse against the late night satirist.

For the record @ColbertReport is not controlled by Stephen Colbert or his show. He is @StephenAtHome Sorry for the confusion #CancelColbert

Notice, the above is not an apology. What people who only read Twitter may not realize is that Stephen Colbert did actually utter the words contained in the tweet. The line was essentially an excerpt from a much longer bit on “The Colbert Report” that poked fun at Washington Redskins owner Dan Snyder's recent efforts to make amends for his team’s persistent, historically galling name without actually changing it.

In the bit, Colbert certainly assumes a racist character, but it’s not one that he hasn’t assumed before. Neither is it the only one. Affecting a particular posture as a means of lampooning it is the entire basis for “The Colbert Report.” It goes without saying that the actual comedian Stephen Colbert is not a staunchly conservative, Republican, bigoted, etc., etc.

Critics of the tweet say it violates a cardinal rule of satire, which is that it fails to target power and/or authority, but instead goes after the oppressed. That may be true of the words excerpted without proper context. But if you watch the entire routine that aired on Comedy Central on Wednesday night, it seems fairly obvious that Colbert and his writers are going after a deserving target, that is, Snyder et al.

So, when you think about it, it’s really Twitter that ruined Colbert’s totally legitimate dig. (I don’t suppose anyone’s down to get behind #CancelTwitter at this point, though.) Someone at @ColbertReport probably should have realized that not all of the long-winded host’s humor can be disseminated as bite-size chunks. Honestly, the best part of the joke -- a tag about triangle hats -- didn't even make the feed. Maybe someone at the office should be held accountable for not knowing how Twitter works – but that doesn’t sound like a firing offense. I mean, really, “The Colbert Show” has given us so much pleasure over the years.

But the fact that a joke died on the Internet yesterday is not the problem here. The most unfortunate result is that now all over cyberspace – and regular space – folks are asking themselves whether or not “The Colbert Report” should be taken off the air instead of asking, “Wait, why are they still called the Redskins?”